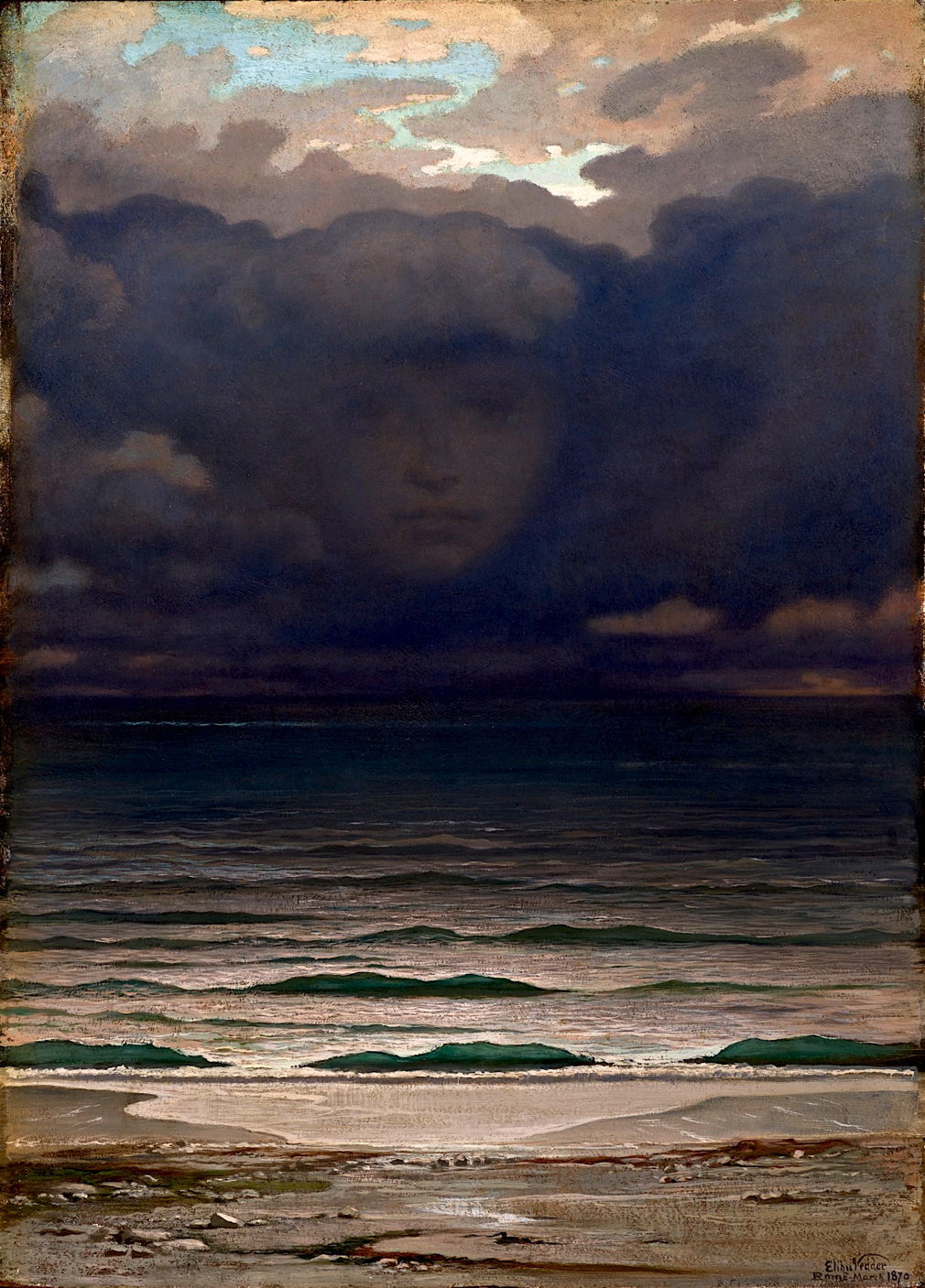 If you’ve come across this week’s Symbolist, Elihu Vedder (1836–1923), it will either be from his fine illustrations for Edward FitzGerald’s translation of The Rubaiyat of Omar Khayyam, or his wall paintings in the Library of Congress in Washington, DC. There is a great deal more to his art, and in this and two sequel articles next week, I’ll consider whether he should be considered one of America’s first Symbolists.

Vedder was the son of a dentist in New York City, where he was born in 1836. While he was at boarding school, he decided that he wanted to be an artist, and started his training in New York City before moving to Paris, where he studied under François-Édouard Picot. He then moved to Italy in 1858, where he was influenced by the masters of the Renaissance and contemporary Macchiaioli painters. Among the latter was Giovanni Costa, with whom Vedder formed a deep friendship, and the pair travelled through the countryside painting landscapes side by side until 1860, when Vedder’s father stopped his financial support, forcing him to return to the USA.

Vedder’s earliest surviving paintings show his accomplishment at painting landscapes en plein air, as in this view of the Tuscan countryside near the famous town of Volterra (1860).

Vedder had returned in the midst of the Civil War, and turned to making illustrations. He became friends with Walt Whitman, Herman Melville and William Morris Hunt, a famous painter of the day.

At some stage, he appears to have visited Egypt, where he made drawings of some of its remains, which he then turned into this unusual narrative landscape of The Questioner of the Sphinx from 1863. This was turned into a successful print.

Fisherman and the Genie from about 1863 shows a scene from the second top-level story told by Sheherazade in the One Thousand and One Nights.

In this, a poor old fisherman cast his net four times. After three unsuccessful attempts, on the fourth cast he caught a large copper jar bearing the seal of Solomon. Curious as to what was inside it, he opened it and a plume of smoke emerged and formed into a malevolent genie (or Ifrit). The genie then offered the fisherman his choice of the manner of his death. The fisherman tricked the genie into putting himself back into the bottle. This leads to a succession of other stories before the fisherman is appointed treasurer to the Sultan and lives happily ever after.

After the end of the Civil War in 1865, Vedder returned to Italy, and seems to have maintained a home in Rome from that time onwards.

Return from Calvary (c 1867) shows an unusual view of Christ’s Crucifixion, with the crosses in the background behind a large crowd presumably dispersing back into Jerusalem. Although it’s tempting to presume that the figures in the foreground are the Marys and Joseph of Arimathea, as they were present at the deposition of Christ’s body from the cross, and its removal for burial, that could not be the case.

The Roc’s Egg (1868) shows a scene from the legend of Sinbad the sailor, a story-cycle probably of Middle Eastern origin. These tales were a late addition to the compilation of the One Thousand and One Nights, but seemed to exist independently before being incorporated there.

In the second voyage of Sinbad, he is accidentally abandoned on an island on which there are roc eggs. Rocs are legendary enormous birds which appear in a number of sources. Here the sailors remove the contents of one of the roc’s giant eggs, which they cook on an open fire. Later in that adventure Sinbad uses a roc to obtain diamonds, before returning home to Baghdad.

The Dead Alchemist (c 1868) shows a lone figure, slumped and apparently dead against a carved chest. Scattered around him is the equipment which might have been used by an alchemist. During the Age of Enlightenment, alchemy was progressively unmasked as bogus, and at best misguided. Although its replacement by scientific chemistry was a slow process, by the late nineteenth century alchemy was scorned and ridiculed. Vedder may have used this image to illustrate poetry.

By 1869, when he married, he had returned to New York City. At some stage, he also visited Britain, where he admired the work of the Pre-Raphaelites, and became friends with Simeon Solomon.

This remarkable painting of Memory (1870) is one of the earliest symbolist images made by an American artist. Its origins are probably in sketches which Vedder made in 1866 and 1867, according to Regina Soria. The earlier of those was a response to Tennyson’s poem Break, Break, Break (1842), in which he ponders the memory of loved ones when contemplating the sea – which is exactly what Vedder shows here. The crisp realism of the waves and beach contrast with the soft vagueness of the face in the clouds.

In the middle of the 1870s, Vedder seems to have been back in Italy where he returned to landscape painting, working both outdoors and in the studio.

His studio painting of Waves at Palo from 1874 shows the beach at Palo, on the Mediterranean coast to the west of Rome, during rough weather.

Storm in Umbria from the following year is a marvellous if rather traditional springtime panorama of the central Apennines, which appears to have been started in front of the motif and completed in the studio.