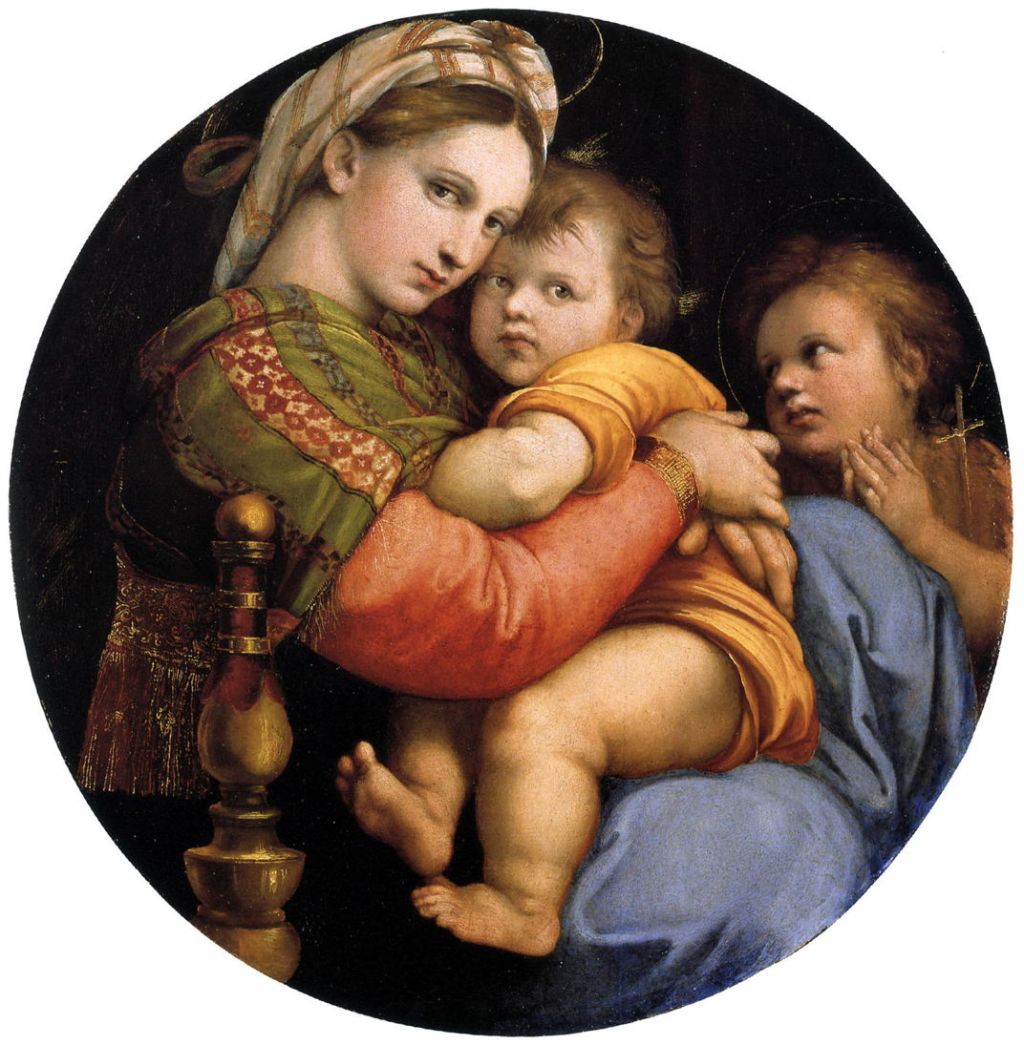 Shortly after his arrival in Rome in 1508, the young Raphael was hard at work on his first stanza of frescoes for the Pope, which he completed by 1511. By the time that he had finished those of the second stanza, he had also painted many major easel paintings and altarpieces. This article looks at a selection of those thought to date between 1510 and 1514, his early years in Rome.

These include several portraits, from which I have selected two which would undoubtedly have been very important at the time, of a Cardinal and Pope Julius II, who died just a couple of years later.

Raphael’s magnificent Portrait of a Cardinal from 1510-11 is notable not only for the lifelike modelling of flesh, but for his attention to the surface textures of the fabrics, something he had developed since his early days with Perugino. Three quite distinct fabrics are shown in the cardinal’s choir dress: the soft matte surface of the biretta (hat), the subtly patterned sheen of his mozzatta (cape), and the luxuriant folds of his white rochet (vestment).

Inevitably, there has been no shortage of proposals as to who this represents, and the most likely is Ippolito d’Este, of the powerful d’Este family, who also receives praise in Ariosto’s Orlando Furioso.

This Portrait of Pope Julius II was probably painted slightly later, in 1511, when it is thought to have been donated to the church of S Marcello in Rome. There is a copy in Florence, but it’s now generally accepted that this version in London is Raphael’s original. Modelling of surface textures encompasses a wider range, including the polished metals of the chair, but isn’t as breathtaking as those in the cardinal’s portrait above. This is also a remarkably familiar and informal image, with the Pope sat not on his throne dressed in pontifical robes, but on a more everyday sede camerale and in working rig, as if in an audience.

It was Julius II who summoned Raphael to Rome, and commissioned his stanze in the Vatican Palace there. Only five years earlier, he had started the rebuilding of Saint Peter’s Basilica, and had engaged Michelangelo too. He fell ill in 1512, and died early the following year at the age of 69.

Over this period, Raphael’s series of Madonnas also reached their zenith.

The Madonna of Foligno is a monumental painting which was commissioned by a friend of the Pope for the high altar of the basilica of Santa Maria in Aracoeli, in Rome. It is thought to have been completed early in 1512, shortly after the death of the donor. As is usual, its full title lists the four figures on the ground: from the left they are Saint John the Baptist, Saint Francis, and on the right the donor kneels with Saint Jerome behind. Its pictorial style contrasts with Raphael’s more intimate tondi, but it’s still a superb work in every detail, down to the distant town and the arch of vaporous cherubs.

If you look carefully above that town, there’s what appears to be a ball of fire falling from the sky. It’s not clear whether this is intended to represent a meteor or comet, or ball lightning. This has been claimed to be a reference to an incident which occurred to the donor in Foligno.

Raphael’s Alba Madonna was probably painted around 1510, and has spawned many replicas. It was commissioned by a bishop for the church of the Olivetans in Nocera dei Pagani, a town on the coastal plain of the south-west of Italy, in the province of Salerno. Its landscape background is also notable.

Of all Raphael’s tondo Madonnas, it’s his Madonna della Sedia (Madonna of the Chair) from 1513-14 which is my favourite. It shows a thoroughly real and natural mother with two infants, every surface texture rendered as in life.

Oddly, Vasari only mentions the Sistine Madonna (1512-13) in passing, but it’s now recognised as one of Raphael’s greatest and most important paintings. It was donated by Pope Julius II to the Benedictine basilica of San Sisto in Piacenza. The two saints shown are Saint Sixtus II and Saint Barbara, whose relics were preserved there. Raphael’s model for Saint Sixtus was Pope Julius II, and the association is strengthened by the embroidery on the saint’s clothing.

The Madonna and saints are painted superbly, but it’s the rest of the image which I find most fascinating. The two cherubs with tousled hair at its foot are gentle touches of humour for a congregation probably appearing much the same as they looked at this image. Its vaporous background is even more subtle than that of the Madonna of Foligno, in forming a host of infants’ heads.

But Raphael’s visual feat is the curtains. He was by now confident that his realism was sufficient to pull off a trompe l’oeil, and fool the viewer into thinking that they were looking at a painting behind real curtains, at least until they got close. Having fooled them once, they’re now more receptive to the image beyond the curtains.

Those curtains have theological significance too: they mark the separation between the physical and spiritual worlds. As those curtains are painted and not real, though, access through them is always open. No one can come along, draw them, and stop the ordinary person from accessing Christ. In a world where almost everything else, apart from air, was heavily controlled, this was and remains an empowering message.

It’s not surprising that since this painting entered the collection at Dresden in 1754, it has often been revered by German artists and art historians as the greatest painting in the world.