Ever since the first Mac, the Finder has provided a common interface for moving and copying documents. But recent versions of Apple’s iWork apps – Pages, Numbers and Keynote – have offered a menu command to move the current document to a different location. This article looks at why you might (not) prefer to use that instead of the Finder.

The longstanding convention in the Finder has been that dragging a document from one location to another on the same volume has moved that document, whilst performing this same act to a different volume has copied the document to the other volume, leaving the original in place, rather than moving it. More recently, Apple broke this convention with dragging documents to and from iCloud Drive, something that I drew attention to in this article.

That is unless you drag an item from a non-boot volume to iCloud Drive, in which case it behaves as if it’s being copied between two different volumes. Although consistent with Apple’s model that iCloud Drive is part of your Home folder, that isn’t how it’s shown in the Finder, and becomes even more confusing when part of your Home folder is stored on an external volume. Ho hum.

In the Finder, you can always opt to move a document to a different volume by holding the Command key down for the operation, and holding the Option key when dragging to a different location on the same volume results in a copy rather than move. It’s also worth noting that, during move operations, although the original document is deleted, it isn’t put in the Trash but removed once the new copy has been saved.

There are some subtle side-effects which are worth considering too. Moving a document within the same volume preserves anything associated with it, apart from symbolic links to it. It doesn’t break hard links, of course, nor Finder Aliases. Most important of all, it preserves any saved versions in the macOS versioning system. Because a move to a different volume creates a new file, though, you should normally expect it to break each of those, particularly saved versions.

So what does the Move To command in these iWork apps actually do? 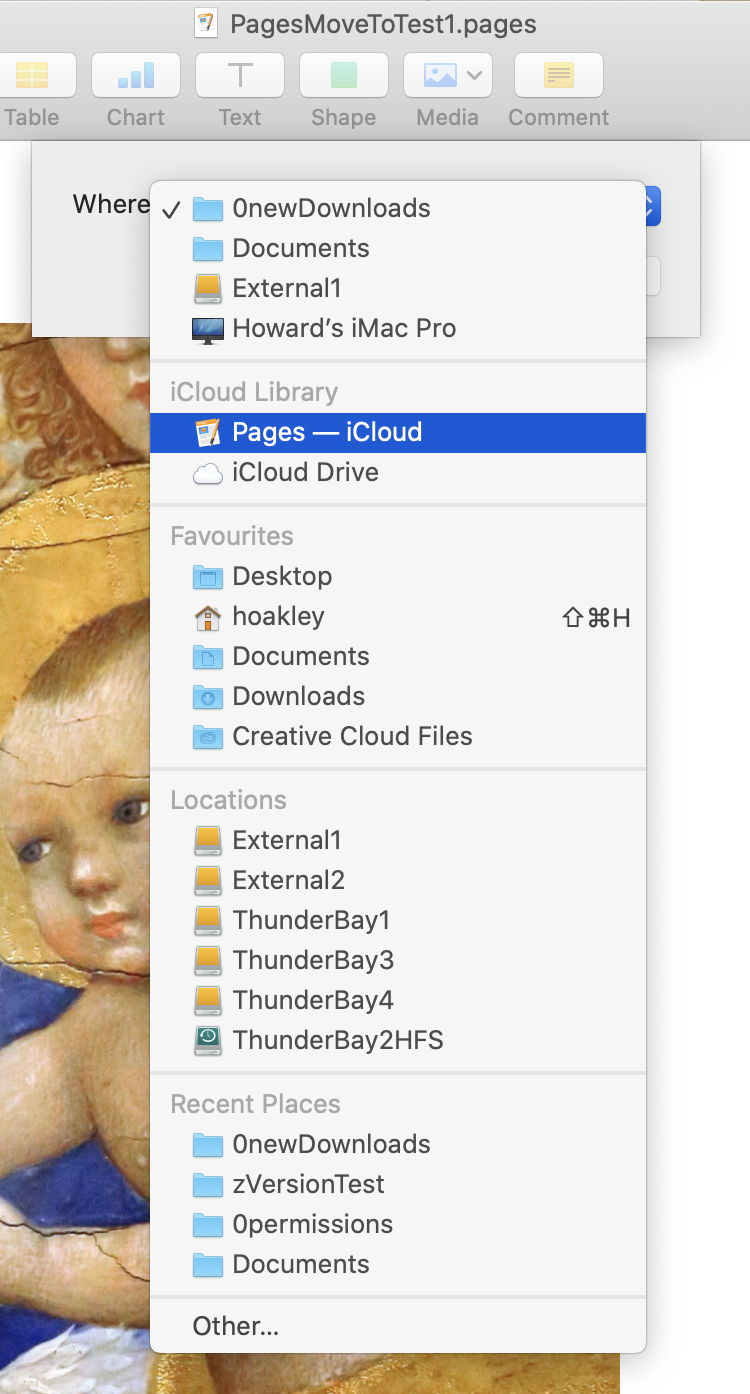 First, it surprises you by not adopting the standard human interface. Instead of the normal Save File dialog, as used by countless apps for a great many years, it drops down a small sheet offering in a popup menu to move the document to where it already is. In the spirit of novelty, as if intended to exemplify bad interface design, that popup lists a strange assortment of locations, of which only a few seem remotely appropriate. If you want a properly-designed purposeful dialog, you have to click on Other… right at the bottom to see a familiar Save File dialog.

This seems angled at encouraging users to move iWork documents to iCloud, but even there is an odd decision: according the Finder’s listing of what it calls iCloud Drive, the Pages – iCloud option is also in iCloud Drive, rather than being a separate location.

What arrives at the destination is disappointingly exactly what you’d get from a regular Finder move: all saved versions are stripped from it. So unless you like this idiosyncratic interface, there seems no advantage in using it over a standard Finder move, and if you want a copy instead, then you’ll want to use the Finder anyway, once again accepting that you’ll lose access to all versions in the process.

This is particularly disappointing now that the macOS versioning system does work (with some quirks) for documents in iCloud. Yet Apple still can’t find a way of preserving those when copying/moving to or from iCloud. If you want to do that, you’ll need to use my free DeepTools, or Revisionist. Meanwhile I wonder why the File menu in iWork apps is now cluttered up with a command which merely replicates the shortcomings of what you can already do in the Finder.

Thanks to Tony, for pointing out that I’ve got so confused with iCloud Drive behaviour that I was lost. I have corrected this article to make this clear.