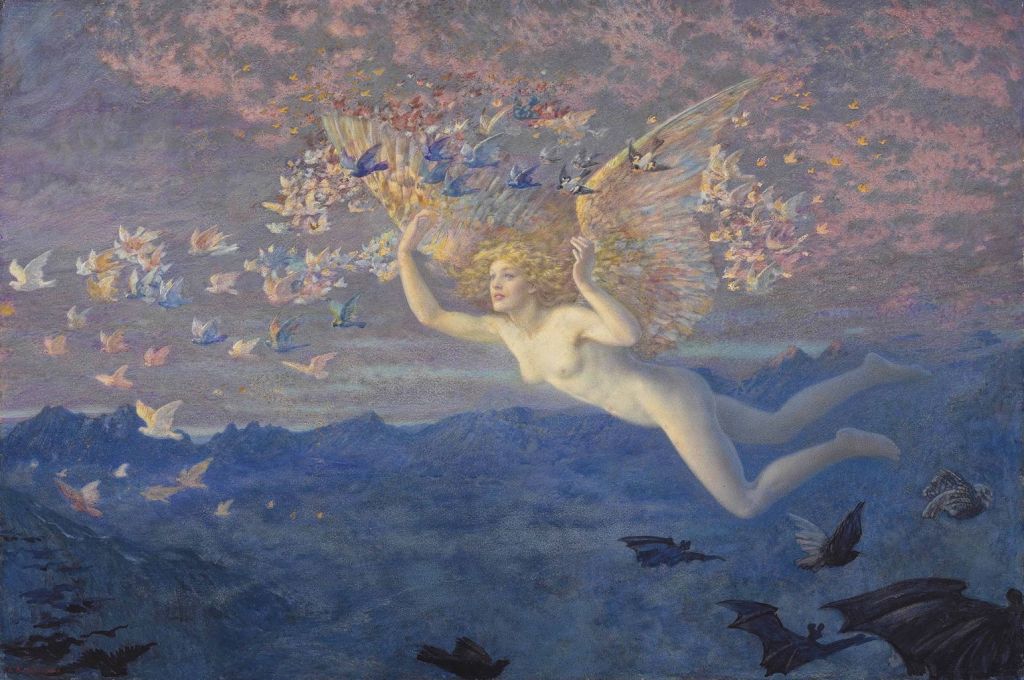 The great majority of paintings show a single moment in time. One of the fundamental questions when reading them is when that moment occurred: the time of year, and time of day. Sometimes these can be identified with great precision, but other images prove a real puzzle. Today and tomorrow I’m going to look at one relatively common question: does this painting show sunrise or sunset?

There are some who feel, from their observations, that there are clear visual differences in the light of dawn compared with that at dusk. Although there are specific circumstances when this may be true, careful optical studies have failed to reveal any consistent differences on which the observer or viewer can rely. In this article, I look at some of the clues we can use to distinguish paintings of dawn from those dusk; in the next I’ll show ten paintings, some of them famous, and you can see how many you can get right.

Often the most obvious clue comes from the title given to the painting. If it specifies the time of day, then that can surely be relied on, can’t it?

For those paintings whose current title is that given by the artist, that should be more reliable than anything else. What we seldom know is whether the painting’s current title was assigned to it by the artist – its provenance. The only way to check that is to look the work up in a good catalogue raisonné, a luxury that is normally only available to the dedicated researcher.

Many paintings made since the middle of the nineteenth century have well-attested histories, such as artist’s and dealer’s records which are held in accessible archives. But all too often the only evidence of a painting’s title is it being written onto its reverse, or stuck to the back on a label, which could be far more modern than the painting. For a great many older, and some newer, works, we have no good idea of the title given to the painting by the artist. So you should treat any current title with a healthy scepticism until its provenance is established.

When you can establish exactly where a view was painted, and in which direction the artist was facing, it should be straightforward to work out whether the sun is rising – in likely locations in the northern hemisphere, the south-east – or setting – the south-west (see footnote for full details: it is the east or west part which is decisive). This usually requires a bit of detective work, but something I not uncommonly do for paintings which I show in articles here.

When you’re fortunate enough to have a well-known view with obvious landmarks, this is straightforward and often reveals fascinating detail. Émile Claus’s Sunset over Waterloo Bridge from 1916 was painted from a location on the north bank of the Thames slightly to the east of Waterloo Bridge (marked as ⑩ on the map below), the north end of which is prominent, and looks south-west into the setting sun, up river.

The Swedish painter Eugène Jansson used views from his studio on Mariaberget in Stockholm. This canvas of Dawn Over Riddarfjärden (1899) therefore looks south-east from that studio into the light of the rising sun, as its title confirms.

Sometimes you don’t even need to look at a detailed map to work this out. During the last months of Ferdinand Hodler’s life, he continued to paint landscapes from the window of his room in Geneva, looking south-east towards the Mont Blanc massif, as in Lake Geneva with Mont Blanc in the (Red) Dawn Light from 1918. Again we confirm what the current title tells us.

If you don’t have any useful idea of the location of a view, celestial bodies like the moon can help, when they’re visible in the painting.

All that I know of Jules Breton’s The Weeders is that it was painted somewhere in northern France in 1868. He has kindly provided a thin sliver of a moon, which is (for the northern hemisphere) a waxing crescent moon, a few days after a new moon. That moon is higher in the sky than the sun, which is only just peeping above the horizon. A waxing crescent moon rises and sets after the sun, so for the moon to be higher above the horizon, this should be late sunset rather than dawn.

Where the painting shows people or animals, we can use our knowledge of patterns of their activity to give clues as to the time of day. These can of course be unreliable: it’s easy to draw conclusions on our own culture and experience which wouldn’t have been valid for the culture and time of the painting, so you will often need insight into the background, which is also important when reading a painting.

Édouard Detaille’s huge oil painting of The Dream from 1888 shows a group of young conscripts just before reveille, when on exercise probably in Champaign, France. As they are only just starting to come to, this can only be dawn.

Detailed knowledge of the Alhambra Palace in Granada, Spain, could be used to give a precise location and direction of this view. However, you only have to look at the women and children taking an open-air picnic in the foreground to realise that the pattern of human activity is only consistent with its fiery light being that of sunset.

Activity and the dress of people in an image can also give you a good idea of ambient temperature, which often differs considerably between dawn and dusk. In a typical diurnal temperature record, the period around dawn is usually the coldest of the day, while that approaching dusk is significantly warmer, and may even be hottest.

Alphonse Osbert’s classical-clad women would probably have been shivering by now had this been dawn, even on a Mediterranean shore. It’s far more likely, as the title states, that the sun is setting here.

Sometimes the impression of temperature indicates the artist’s intent: the roofs in Eugène Jansson’s Sunrise Over the Rooftops. Motif from Stockholm from 1903 are frozen blue and smoke rises from just a few of the chimneys, suggesting that this is dawn.

Very occasionally, the whole painting will tell you a story, or refer to one which is well-known.

Edward Robert Hughes’ Wings of the Morning (1905) shows his personification of the dawn, as a winged nude woman who is bringing the early day. Coloured doves recede into what the artist referred to as “a mass of cirrus clouds”, rose-tinted by the dawn light. These dispel bats and owls, creatures of the night. We are left in no doubt that this is dawn.

In tomorrow’s article, we’ll see how well these fare across ten paintings.

The big difference between sunrise and sunset in terms of direction is that the sun rises in the east and sets in the west. How far north or south of east/west depends on where you are and the date, but can be best understood by considering local or solar time.

In the far north (in the northern hemisphere, or south in the southern), in mid-summer, the sun rises close to the north, perhaps north-east or even north-north-east, but does so at a very early local time. For the sun to rise in the north-east, local time will be around 0300 – when very few painters are likely to witness the dawn! For the sun to rise due east, local time will be 0600, which is also unlikely to be witnessed by most landscape painters, let alone painted in oils in front of the motif. Sunrise in the south-east occurs at around 0900 local time, and is therefore more likely to appear in paintings.

Most European landscape paintings have also been made in southern Europe, with its more dependable weather. Even in midsummer, in the Mediterranean sunrise there is unlikely to be much further north than due east, and for most paintings is more likely to be more towards the south-east, and after 0600.

In the far north of Scotland, or the Nordic countries, sunrise at the height of summer is going to be in the north-east, but well before 0600. Once you approach the Arctic Circle, in midsummer the sun hardly sets at all, but will dip below the horizon to the north for an hour or two. North of the Arctic Circle, it doesn’t set at all for the period around the summer solstice in late June: that’s the Midnight Sun.

Thus, in European paintings you’re most likely to encounter dawn which was seen after 0600, which occurs to the south of east, and dusk which was seen before 1800, which occurs to the south of west. If you know that the painting was made in front of the motif before 0600 in the morning, and in a more northerly location, then you should expect to see the sun rising in the north-east rather than the south-east.