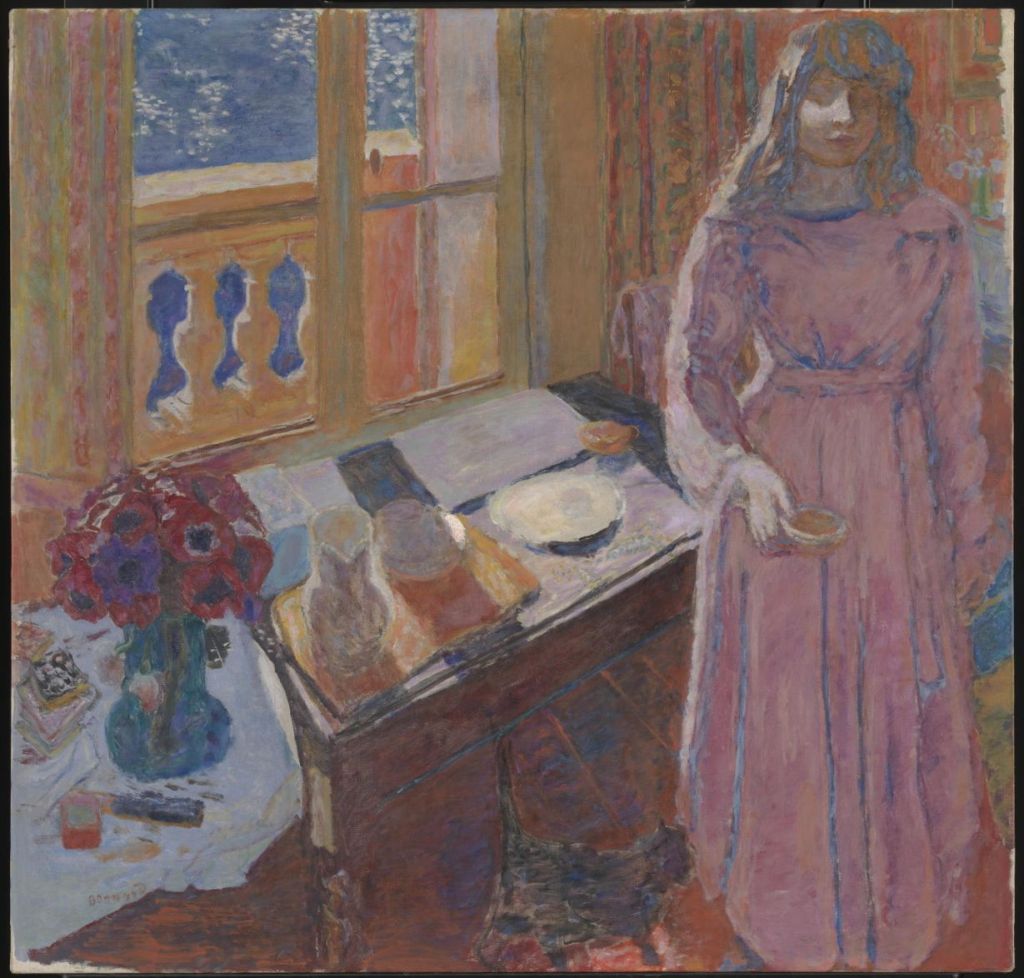 My final selection of paintings from 1919 is an eclectic mixture of figurative works, including a couple of self-portraits, and floral still lifes. As with the previous articles in this series, they show well the wide range of styles which were current at the time.

Nikolai Astrup was a wonderful Norwegian painter who provides us with a vivid account of traditional life in the countryside. His Self-Portrait at Sandalstrand with Engel and Her Sister (1919) gives a glimpse into his personal life. Here he sits, puffing on his pipe and staring into the distance. Deeper into the painting, Engel, his young wife, is nursing a baby at her breast. At the right, dressed in blue and clearly at a great distance from the world around her, is Engel’s sister.

However, that image of tranquillity in the landscape was idealised. Astrup’s health had not been good, and he was clearly unhappy. In 1919, he had to postpone indefinitely plans to travel abroad using a travel grant, and for a while, he seriously considered emigrating to the USA. Thankfully, he didn’t.

Lovis Corinth had been one of the leading painters in Germany (and Europe more widely) until he suffered a severe stroke in December 1911. Thanks to the support of his artist wife, Charlotte, he returned to painting within a year, and became as prolific in later years as he had been before. However, his initial nationalist support for the Great War was dashed with Germany’s defeat, and by the time that he painted this Self-Portrait at the Easel (1919) he had aged rather more than his years. He was about 61 at the time.

József Rippl-Rónai, the founder of modern painting in Hungary, was slightly younger than Corinth, but was spending more time at his villa in his home town of Kaposvár, where he painted mainly portraits, including this of Elza Bányai in a Black Dress.

Pierre Bonnard’s painting The Bowl of Milk (1919) is perhaps one of his best-known domestic interiors now, thanks to London’s Tate Gallery, which has acquired many of the artist’s preparatory sketches, making it one of his best-documented works.

Bonnard here uses more muted colours reminiscent of his earlier Nabi period. The woman has just poured milk into a small bowl, which she is now about to put down for her cat. Beside her is a table laid out with four places for breakfast, with a large jug of milk on a tray. To the left is another table, on which is a vase of flowers and assorted small objects. The black cat is pacing the floor at the woman’s feet, as cats do, and was only added in the final painting.

Although it may appear to have been painted impromptu, Bonnard planned his composition very carefully over several sketches, in classical methods underlying its modern look.

Standing Woman and Seated Woman in a Landscape is among Pierre-Auguste Renoir’s last and most radical paintings, and was probably made in the summer prior to his death. The woman who is standing holds a basket in her right hand; the other figure is seated on the grass, with her legs merging into its leaves.

Alphonse Mucha’s contrasting Christmas in America has a complex story behind it. In 1919, Mucha had realised his great ambition, to exhibit his series of twenty paintings depicting the history of the Slav peoples, his Slavic Epic, in Prague, which had only the previous year become the capital of newly-independent Czechoslovakia.

Mucha’s decade of work on this series had been supported by the American Charles Crane, celebrated by this painting. Tragically, when the Nazis invaded Czechoslovakia in March 1939, Mucha was badly persecuted, and died on 14 July 1939 in Prague, just before the start of the Second World War.

For many artists, painting flowers has been their therapy, a safe retreat when their life has got tough. For Henri Fantin-Latour, it paid the bills and financed his large group portraits; for Charles Demuth, they were a mainstay of his episodes when he was recovering from acute complications of his diabetes.

Édouard Vuillard painted occasional examples, such as his Roses in a Glass Vase, a relief from a steady succession of portraits and other commissions.

Toward the end of the 1910s, the Polish Post-Impressionist Olga Boznańska painted a series of quite radical still lifes featuring Japanese objects, such as this Still Life with White Flowers and a Japanese Doll (1919).

Finally, Lovis Corinth had used floral paintings during his recovery from his stroke, including Roses (1919).

Such an eclectic year in painting.