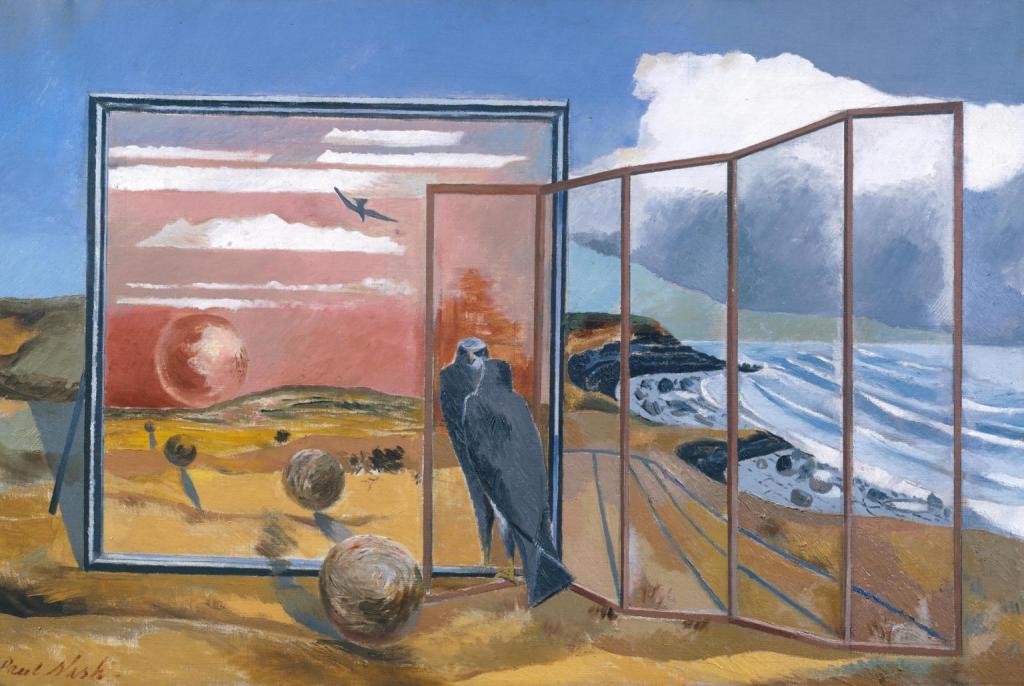 In the first of these two articles about the Surrealist paintings of Paul Nash, and his role in the movement in Britain, I looked at his work prior to 1936, and at his role in the formation of Unit One. In 1936, Nash took part in the first International Surrealist Exhibition in London, showing photocollages and an objet trouvé of a piece of wood retrieved from a stream, as well as several of his paintings.

The previous year, several of those involved with Surrealism in Britain had been in Paris, engaging with key figures in the Surrealist movement there. These included Roland Penrose, David Gascoyne, Julian Trevelyan, Eileen Agar, John Banting and Henry Moore. It was Gascoyne who published the First Manifesto of English Surrealism that year, ironically in French and in the French journal Cahiers d’Art.

In early 1936, André Breton and Paul Eluard, two of the leading French Surrealists, proposed visiting London to discuss an international exhibition there. From the beginning of April, an organising committee started to meet; among its members were Paul Nash, Henry Moore, and the Cambridge don and writer Hugh Sykes Davies. Hanging was agreed for 8 and 9 June that year, and the opening by André Breton was set for 11 June.

When Nash had visited Toulon on the French Mediterranean coast in 1931 (or perhaps the year before), his hotel room overlooked the busy harbour there. One day he saw the image of a large sailing ship in a big mirror in his hotel room, which gave the appearance of the ship sailing into his room. From that visual memory came Harbour and Room (1932-36), another geometric composition which merges Nash’s hotel room, complete with its mirror over the mantlepiece, with parts of a ship, including a carpet of small waves.

While he was living on the Dorset coast, Nash took to collecting objects which engendered personal associations. One of these was exhibited as an objet trouvé at the Internation Surrealist Exhibition, but in Swanage (c 1936) he went further. This is a collage composed of Nash’s own photos of some of his objets trouvés, which he has extended and elaborated using graphite and watercolour. These combine elements of chance, personal association, and their assembly into something beyond the sum of the original objects.

The First International Surrealist Exhibition opened in the New Burlington Galleries in London on 11 June 1936. Thanks largely to Nash, it had been well publicised, and was suitably criticised by the press. Sheila Legge was dressed as a ‘surrealist phantom’, her face completely covered with roses, holding a pork chop in one hand and a prosthetic leg in the other.

Several lectures were given. Salvador Dalí started his wearing his famed diver’s dress, a jewelled sword at his side, two borzoi dogs on a leash, and holding a billiard cue. Unfortunately, after a few minutes of starting his talk, he began to suffocate within his helmet, and his wife Gala had to unscrew the helmet.

A total of 23,000 visited its collection of 360 collages, paintings and sculptures. A total of 69 artists from fourteen nations exhibited, of whom 27 were British. The biggest problem was a special publication showing Nordic Surrealist art was siezed by British customs on entry into the UK, on grounds of indecency. The exhibition launched Surrealist art in Britain, and was a major milestone in its development in Europe.

The following year, Nash had a large solo exhibition at the Redfern Gallery in London, and visited the White Horse hill-figure cut into the chalk down at Uffington in Berkshire.

Voyages of the Moon (1934-37) develops ideas which Nash first expressed in a drawing of light bulbs reflected repeatedly in the mirrored walls of a restaurant in Toulon. He combines multiple spheres with a forest of vertical rods, which is reminiscent of a lunarium, a form of orrery showing the movements of the moon. This is set inside a spacious hangar or warehouse with high skylights.

Landscape from a Dream (1936-38) is one of Nash’s most complex and elaborate surrealist paintings, inspired by Freud’s theories of the significance of dreams as reflections of the unconscious. Nash locates this collection of incongruous objects on the Dorset coast, a landscape which he associated with the praeternatural. Dominating the scene is a large framed planar mirror, almost parallel with the picture plane.

Stood at the right end of the mirror is a hawk or falcon, which is staring at its own reflection, which Nash explained is a symbol of the material world, and may also be associated with the Egyptian sun god Horus. To the left, the mirror reflects several floating spheres, which Nash associated with tumbleweed, and refer to the soul. The reflection shows that behind the viewer, a red sun is setting in a red sky, with another hawk/falcon flying high, and away from the scene.

To the right of the hawk/falcon is a five-panelled screen which is made of glass, through which the coastal landscape can be seen: it is a screen which does not screen.

Nash’s watercolour Three Rooms of 1937 was a response to the International Surrealist Exhibition of the previous year. The three rooms have become taken over by the sky (top), a forest (middle), and the sea (bottom). The work’s graphic elements are reminiscent of the paintings of William Blake.

Circle of Monoliths (1937-38) is one of a pair of complementary paintings of the same title, which Nash made over the same period. The other (below) shows a similar arrangement of rock-like objects on a coast with cliffs.

What might at first appear to be a collection of completely abstract images turns out to have strong roots in the physical world. The landscape is of chalk cliffs (upper left) and sea, with a large chalk pinnacle just to the right of centre; these are inspired by the coast of Dorset, but made to appear unnatural by their unusual colours.

Two broken ridges run from the foreground into the sea. These are composites of old hedges, stone walls, and the rock spines which are embedded in beaches along the Dorset coast, with occasional trees, in strange colours in the upper version. The forms of the larger objects scattered across the pale blue beach are those of rocks and other found objects, which Nash collected. Their surfaces appear to be ‘silvered’ to act as mirrors, and reflect spheres which symbolise the soul.

Nocturnal Landscape (1938) was another response to the International Surrealist Exhibition. Nash populates a sparse desert-like landscape with another collection of incongruous objects. These have their inspiration in forms he saw in nature, and in found objects, At the upper left is a grille, which echoes his earlier geometric forms. The moon’s crescent shape has been distorted, as if bites have been taken from it.

The following year, the world was at war again, and its images quickly came to dominate Nash’s paintings. At the end of that, shortly before his untimely death, he painted some of his most remarkable works, of which I show just one in conclusion.

Eclipse of the Sunflower (1945) was inspired by William Blake’s poem Ah! Sunflower, from his Songs of Experience (1794):

Ah Sun-flower! weary of time,
Who countest the steps of the Sun:
Seeking after that sweet golden clime
Where the travellers journey is done.

Where the Youth pined away with desire,
And the pale Virgin shrouded in snow:
Arise from their graves and aspire,
Where my Sun-flower wishes to go.

Nash shows a sunflower undergoing an eclipse, as if a celestial body. Below is a windswept sea and the coast of Dorset, as he had painted in his wartime work Defence of Albion (1942). Just above that coast are more peculiar botanical structures relating to the sunflower, and behind is the threatening sky of an imminent storm.

In an essay in 1945, Nash explained how the Second World War had changed his perception of the sky:
When the war came, suddenly the sky was upon us all like a huge hawk, hovering, threatening. Everyone was searching the sky, expecting the terror to fall: I among them scanned the low clouds … hunting the sky for what I most dreaded in my imagining. It was a white flower. Ever since the Spanish Civil War the idea of the Rose of Death, the name the Spaniards gave to the parachute, had haunted my mind, so that when the war overtook us I strained my eyes always to see that dreadful miracle of the sky blossoming with these floating flowers.

He had also – in common with many other artists before – shown the sky as the domain of souls, thus important to the event of death, a subject which was clearly occupying his mind more and more. In July 1946, Nash returned to the Dorset coast. On 11 July, he died in his sleep from heart failure caused by his lifelong asthma. He was 57.