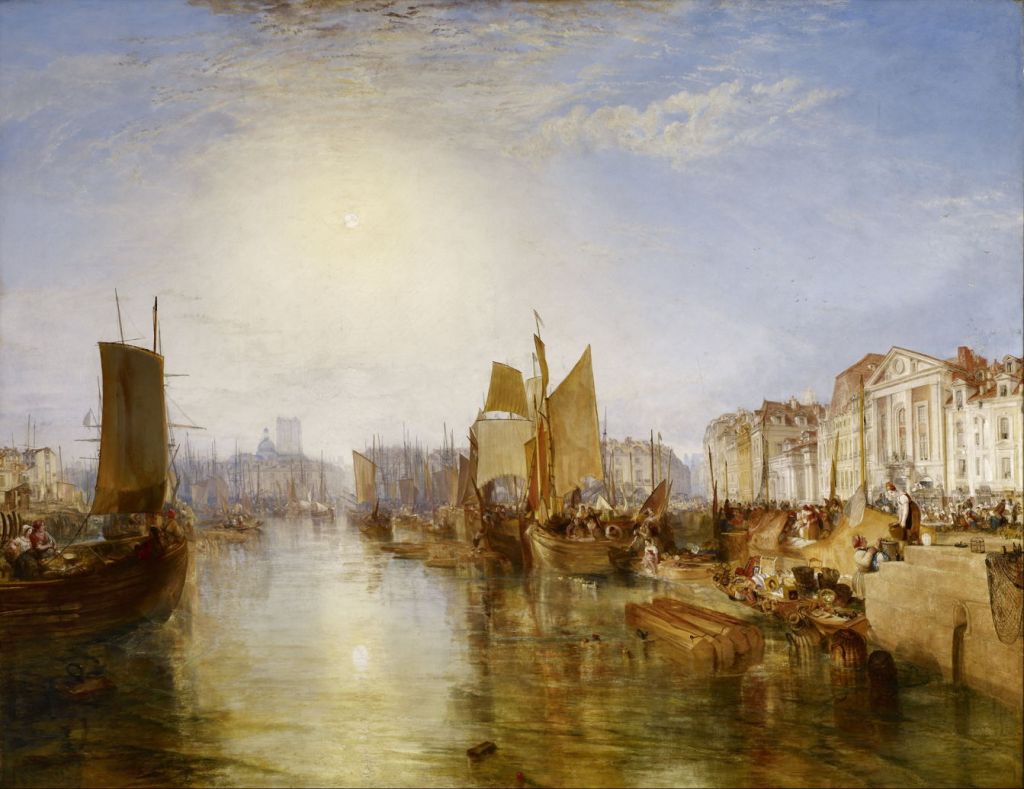 In the early nineteenth century, Britain was blessed with two major landscape painters, John Constable and JMW Turner. Not only were they contrasting personalities, but their painting methods were very different too. Constable made extensive plein air oil and watercolour sketches and progressively worked up large finished works through a series of increasingly detailed oil studies. This article looks briefly at Turner’s methods.

In his early career, Turner had been a topographic painter, working largely in watercolours, and had learned to produce pencil and watercolour sketches before he was particularly proficient with oil. He did make some oil sketches, though.

This oil sketch of Guildford from the Banks of the Wey was painted in about 1805, when he took a trip along the River Thames. Although thoroughly competent, he chose for most of his career to work very differently, even when the finished painting was going to be in oils.

Turner visited France, including its Channel coast, on many occasions, both when on passage to Italy and other more distant countries, and as a destination in itself. In 1824, he visited the bustling port of Dieppe during a tour of the Rivers Meuse and Moselle, and kept a record of the views he saw there in one of his small notebooks.

This pencil sketch of Houses Surrounding Harbour at Dieppe (1824, above) and that below of Shipping at Dieppe Harbour (1824) show how quickly he made these. Some bear his colour notes and other remarks, intended to remind him of details of the scene when he came to paint it later.

He also made some hurried watercolour sketches in front of the motif, and others when he was back in his studio and working up ideas for a painting.

This view of Dieppe Harbour is thought to have been painted in 1826, a couple of years later, and shows a very different scene.

Sometimes these led to a small and detailed watercolour study, which might then be progressed into a larger work intended for exhibition and sale. This view is a slightly later watercolour of the city of Rouen.

In this case, Turner turned those rough pencil sketches and notes, and his amazing visual memory, into this finished oil painting of The Harbour of Dieppe in about 1826.

Although Turner paid great attention to painting reality in its detail, he was also not averse to altering a view if he felt it might enhance its aesthetics.

His early success of Fishermen at Sea from 1796 shows small fishing boats working in heavy swell off The Needles, on the Isle of Wight, and was his first oil painting to be exhibited at the Royal Academy.

Close examination of the painting reveals that, even at this early stage in his career, Turner was not painting motifs as they were in nature: from the position of The Needles, this view would look to the south-west from Totland Bay.

Yet he shows the distant promontories of the south-west coast of the Island, as if the view was made round the other side of The Needles in Freshwater Bay looking south-east instead. Another group of chalk sea-stacks was located there, with some common appearances to those at The Needles, and it is probable that Turner merged them and added the background from the south-west coast.

When it came to his painting materials and their preparation, until his father died in 1829, the older Mr Turner worked as his studio assistant, stretching and priming his canvases in particular. Thereafter, following his father’s death, Turner had to rely on the primed panels and canvases which he could purchase from colourmen. His techniques also became increasingly radical, and some of his choices of materials were not as wise as they could have been. As a result, increasing proportions of his paintings have suffered problems.

Turner knew full well how to make oil paintings which would last for centuries, but he was driven throughout his career by the need to experiment, in order to express the unique light and colour effects which he wanted.

For example, in his Seapiece with fishing boats off a wooden pier, a gale coming in, possibly from as early as 1801, Turner made extensive use of sgraffito, which may have been made using a knife, brush handle, or even his fingernails.

Where this became more hazardous was in his control of the thickness of his paint and the resulting paint layer.

The results of this are shown in one of his most famous paintings on canvas, The Fighting Temeraire tugged to her last Berth to be broken up from 1839.

Turner applied high chroma paint quite thickly on top of already thick and layered paint. Although this produces breathtaking effects, as shown in this detail, it will result in problems with cracking unless those superficial layers dry more slowly than layers underneath, a phenomenon embodied in the well-known ‘fat over lean’ rule. Here they have clearly not done so, and patchy areas of cracking are the result.

Some areas are worse affected, with apparent wrinkling probably resulting from the slumping of impasto, and undried paint exuding. This is most probably the result of Turner’s use here of bitumen or asphalt, which inhibits the oxidative ‘drying’ of linseed oil, and commonly leads to problems in the paint layer. Sadly bitumen was a popular pigment in the 1800s, despite its adverse effects being well known.

Hellen and Townsend also attribute this to Turner’s extensive use of Megilp, here a product sold by his colourman containing leaded drying oil and mastic varnish. Used sparingly and with great caution, such medium modifiers do not necessarily cause serious ill-effects. But Turner sometimes used Megilp to excess, to produce a soft impasto in particular.

Turner’s Approach to Venice (1844) was painted with very thin transparent glazes over thick white impasto, which creates a distinctive flickering effect in highlights.

Despite the artist’s efforts to get the white impasto to dry more quickly, the glazes dried first, and cracked as they became stressed over the white which was still wet. This has not been helped by the later conservation process of lining, which places an additional layer on the back of the canvas to help the support do its job.

Turner was also one of the first painters to make use of ‘modern’ pigments, including chrome yellow, which he purchased in tubes rather than bladders. It was John Goffe Rand who patented what he termed “metal rolls for paint” in 1841. At first, these were seen not so much as a means of increasing the portability of oil paints, but for their cleanliness and lack of odour.

As you’d expect from such an experienced master landscape artist, Turner painted quickly, and often seems to have worked on groups of three or four paintings at same time, using the same brush and colours as he switched from one to another. Here is true genius at work.