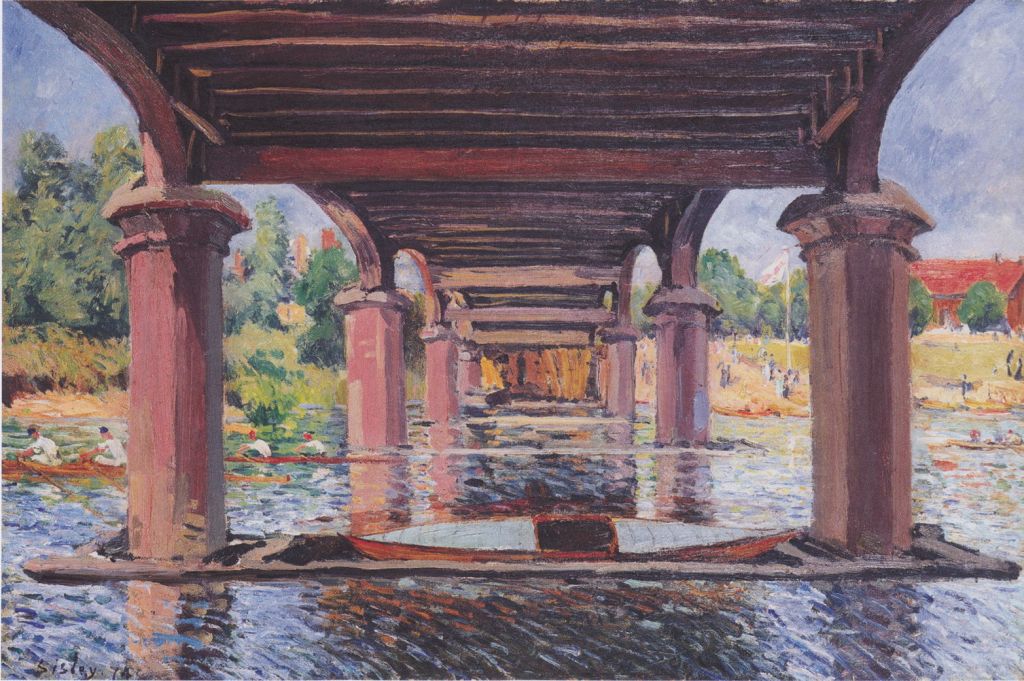 The Franco-Prussian War was much harder for the Sisleys. With the Prussian occupation of Bougival, close to Pissarro’s house in Louveciennes, they fled to Paris. Although Sisley himself had British nationality, he was in no financial position and probably too late to escape over the Channel to England. The family business collapsed too, and the mental health of his father must have made it impossible for him to abandon his parents. The Sisleys thus had to remain in the city, Alfred unable to serve because of his nationality, and the family half-starved through the siege.

Like Pissarro, Sisley lost everything that had been in his studio and house in Bougival, including much of his previous work.

Sisley must have been one of the most prolific painters of bridges outside the centre of Paris. In his River Steamboat and Bridge from 1871 he captures the very modern sight of a small paddle steamer approaching the arches of a bridge most probably on the River Seine. For its time, Sisley’s facture is exceedingly rough, particularly in the water surface and sky.

Sisley’s later view of The Canal Saint-Martin, Paris from 1872 shows a placid and almost disused stretch of canal slightly further out of town from his first painting of the canal in 1870. Originally intended to supply Paris with healthy drinking water from the River Ourcq to the north-east, by this time it was largely used to bring supplies of grain and building materials into the heart of the city.

In 1872, shortly after Monet and his family returned to France, the Sisleys moved in with the Monets in Argenteuil. This marked the start of a highly productive period for Sisley, and, in conjunction with Monet and Renoir, changes in his art. The three concentrated their efforts on the recording of transient effects of light using colour, removal of black from their palettes, and abandoning the traditional ‘finish’ of a painting.

Footbridge at Argenteuil from 1872 is dominated by the perspective projection of the bridge itself, almost to the exclusion of the river below. Sisley’s figures are very gestural but here look more natural in their forms.

The Bridge at Villeneuve-la-Garenne (1872) shows a more modern suspension bridge in this small town to the north of Paris, with quite generous staffage. This was presumably painted while he was staying with Monet.

From Argenteuil, the Sisleys moved to live in Voisins-Louveciennes, where they lived in a rented house not far from where Pissarro had lived before the war.

Many of Sisley’s landscapes appear to have been painted en plein air in a single session, and their roughness is a mark of the lack of time to render detail. The Seine at Bougival from 1872 appears to have been less rushed, and may have been the result of two or more sessions in front of the motif, as was often practised by Pissarro, for instance. Its water surface is mirror-smooth, and Sisley has been careful to paint the reflection of the buildings with optical precision.

The Aqueduct at Marly (1874) shows the massive form of this aqueduct which appeared in the distance in Pissarro’s Chestnut Grove at Louveciennes from 1872, which I showed yesterday. This and the nearby Machine de Marly, which Sisley also painted, were part of a monumental hydraulic network built in the 1680s for Louis XIV, to supply water to the Château de Marly and the royal gardens of the Palace at Versailles. The stone tower at the right end of the aqueduct is the Tour de Levant, which was used by Prussian troops as a vantage point for observing the beseiged city of Paris, a point which won’t have escaped Sisley’s attention.

This painting was bought from the artist by Paul Durand-Ruel, but not until 1876.

Sisley’s Fog, Voisins from 1874 is perhaps his equivalent of Pissarro’s Hoar Frost at Ennery (1873). This radical painting shows a fog-cloaked flowerbed in the foreground, the small patch of colour in this garden. The woman working away is not tending her nasturtiums, but toiling away at what will, in a few months time, be carefully prepared and cooked in her kitchen.

Sisley was never as enthralled as Pissarro was in painting either ‘road’ or snow scenes. His Snow on the Road, Louveciennes (1874) clearly comes from the same school, but his trees and buildings remain distinctive.

He was closely involved with the formation of the Impressionist movement, and exhibited six works in the First Impressionist Exhibition in 1874.

In the summer of that year, Sisley accompanied his patron Jean-Baptiste Faure, a celebrated opera singer, on a visit to London. Sisley paid for this trip in kind, providing Faure with six paintings. The two stayed initially in South Kensington before moving out to the Castle Inn near Hampton Court, which provided Sisley with the best opportunities to paint.

Hampton Court had long been a major manor house, which was extended to become a royal palace for King Henry VIII. Despite its fine position on the River Thames, it was then largely abandoned until Queen Victoria opened it and its gardens to the public.

A decade before Sisley’s visit, an iron toll bridge had been placed over the River Thames nearby. Sisley seized the moment and painted one of his most unusual views of a bridge, in his Under Hampton Court Bridge from 1874. This carefully aligned projection of the bridge is symmetrical about the centreline of the painting, and the composition is carefully balanced with trees at the left and a building at the right.

The two racing boats seen on the left of that bridge reflected the growing interest in watersports, which Sisley revisited in the most famous of his paintings from this trip to England: Regatta at Molesey (1874), one of the gems of the Musée d’Orsay in Paris. This small competitive event had only been established in 1867, and still takes place on the same stretch of the River Thames not far from Hampton Court. This painting was bought by Gustave Caillebotte for his collection of Impressionist works.

Molesey Weir, Hampton Court (1874) shows the weir on the River Thames near the location of that regatta, and presents an excellent collection of different surface effects of water accomplished by the combination of colour and brushwork.

Sisley enjoyed his four months away, and returned to France in time for the winter, at the end of which he and his family moved again to nearby Marly-le-Roi. In just a few paintings over that period he had demonstrated his versatility across a wide range of motifs, and above all his eloquence in using the new Impressionist techniques.