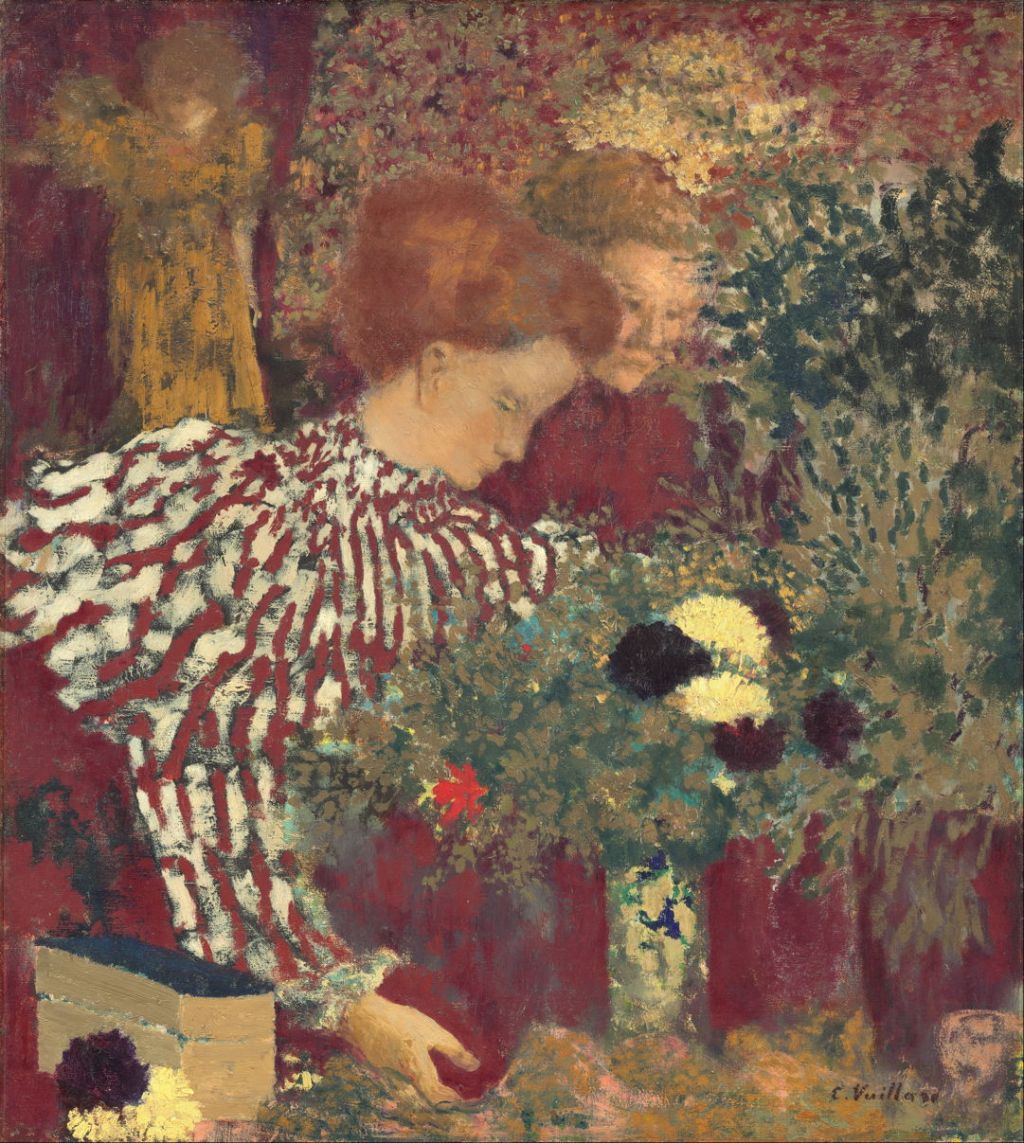 After the Nabis coalesced as a group in the early 1890s, they reached their peak in the middle of that decade, and exhibited together in June 1894 in Toulouse.

It had never occurred to me when looking at the works of the Nabis individually, but a striking feature when their paintings are pooled together as a group is how many of their figures are women, and how many of these ‘high Nabi’ paintings explore the theme of womanhood.

Pierre Bonnard’s Three Ages (Maternity) (1893) is a thoroughly Nabi treatment of a classical theme, with a newborn infant sat on its mother’s knee, and grandmother behind. Bonnard’s decorative effect on the mother’s dress is applied flat, rather than being projected over her 3D form, giving the painting the look of collage.

Ker-Xavier Roussel’s Meeting of Women from about 1893 continues the theme of womanhood in Nabi style, and is decidedly autumnal.

Georges Lacombe’s Chestnut Gatherers from 1893-94 combines the Nabi flattened decorative look with a rich red more typical of the early twentieth century. He and Paul Sérusier (see below) had a particular fascination for mysterious scenes in the woods of Brittany.

In 1894, Édouard Vuillard painted one of the great Nabi masterpieces, one of many now at the Musée d’Orsay: his large triptych Public Gardens. Its Japoniste panels show daily life for the nannies, nurses and their children in fine weather in one of the larger public parks, probably in Paris.

Like Georges Lacombe, in 1894 Paul Sérusier was deep in the woods of Brittany, with his more puzzling Snake Eaters. It seems to show a cultic religious ceremony taking place among the ancient trees, but apparently refers to the writings of Gabriela Zapolska, a naturalist Polish author who lived in Paris from 1889, and may have moved in common artistic circles.

Georges Lacombe’s The Ages of Life from about 1894 sets this classical theme in those same ancient and mystical woods.

In 1895, the Nabis exhibited together in the ‘first salon’ of the Maison de l’Art Nouveau, Siegfried Bing’s gallery on the Rue de Provence in Paris, which specialised in modern and Japoniste art and gave its name to the Art Nouveau movement. The dealer Ambroise Vollard commissioned Pierre Bonnard and other Nabis to make lithographs for albums.

Maurice Denis was more actively involved with religious works, and that year was commissioned to paint seven large paintings on the vision and comversion of Saint Hubert for the home of Baron Cochin in Paris. The Baron, who lived between 1851-1922, was a writer and Catholic right-wing politician, who also collected Impressionist paintings.

By 1894-95, Pierre Bonnard’s paintings were starting to diverge from his Nabi style. One of his few larger studio works from this period, The Large Garden has an independent look more typical of his later works. It shows the large grassy orchard garden of a house in the country, possibly in the Dauphiné. As well as three children and the mother/housekeeper, there is a rich collection of domestic creatures. The woman has gathered in and folded white sheets, which have been drying on the fence which crosses the canvas. The third child has been cropped as if at the edge of a photograph. This enhances the impression of her running briskly to the right.

In contrast, in 1895 Édouard Vuillard’s Woman in a Striped Dress remains more conformant with the flattened, decorated painting style.

Unlike Pierre Bonnard, Félix Vallotton doesn’t appear to have painted many views of the city of Paris, but this Street Scene in Paris from 1895 is in Nabi style and shares much with Bonnard’s views of the Paris streets, even down to the errant dog in the middle of the road.

Around 1895, Paul Ranson painted series showing groups of women in various circumstances, including Four Women at a Fountain, with its Nabi style.

Next, members of the group started to diverge and develop more individual styles.