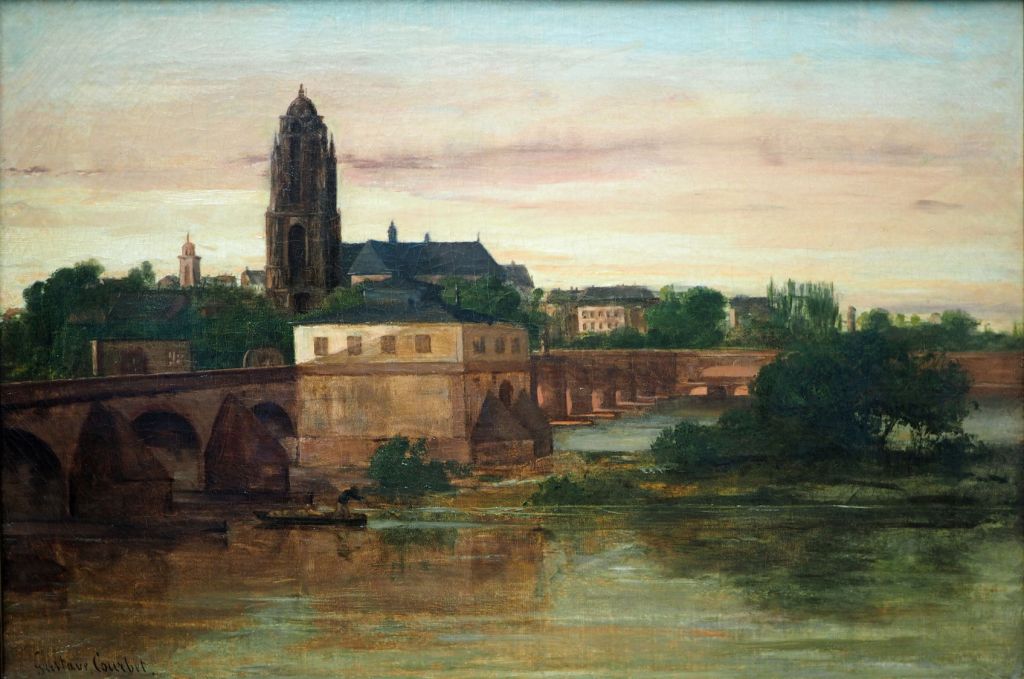 In the mid-1850s, Gustave Courbet painted several fine landscapes, mainly of the countryside around his native Ornans. He also painted one of the most enigmatic works of the entire century, shown below. For the Exposition Universelle to be held in Paris in 1855, he submitted a total of fourteen works, including A Burial at Ornans and The Painter’s Studio. The latter two, being very large canvases, were rejected (along with another), so the artist withdrew from the exhibition and set up his own gallery of paintings next door to the Exposition.

Courbet’s The Painter’s Studio is one of the great ‘problem paintings’ which has been extensively analysed and ‘explained’ as allegory. Those classical approaches have recently been challenged by Herbert, who argues that trying to determine whether it is allegorical or realist is asking the wrong question.

The figures in the painting show individuals who had influence over Courbet’s life and artistic career. At the right are the artist’s friends and admirers, including his first patron Alfred Bruyas, critics Champfleury and Baudelaire who had been so positive in their reactions to his work, and others. At the left a man with dogs has been interpreted as an allegory of the Emperor Napoleon III. Behind him are figures who were long assumed to be allegorical, but Hélène Toussaint identified them as contemporary people, most of whom had been supporters of the Emperor’s regime.

However at the painting’s centre point is a canvas, at which Courbet himself is shown at work. The nude model beside him might appear contradictory, given that the work in progress is clearly a landscape. This has been interpreted as indicating how Courbet has shunned the academic art tradition for the new (and increasingly popular) genre of the landscape.

Courbet has shown considerable detail in the painting within the painting, making it clear that it is a landscape set in the countryside around his home town of Ornans. This makes obvious reference to his origins and where he considers is still his home.

Although his favourite critics praised Courbet’s rival exhibition, the public was unconvinced.

For the Salon of 1857, Courbet prepared six paintings, of which the most notorious is his Young Ladies Beside the Seine (1856), which shows a pair of prostitutes relaxing under a tree. The woman nearer the viewer is clad in her corset-cover and petticoat, reliable signs that she lacks moral virtue. Linda Nochlin describes this as “the potent concatenation of whiteness, supineness, sleep, and sexual scandal”.

His other works were rather less controversial, and included two fine hunting scenes: Deer Running in the Snow and The Quarry, shown below.

Deer Running in the Snow is perhaps the earlier, from 1856-57, and one of Courbet’s first hunting scenes. Its crisp contrasts give it a very modern look.

The Quarry (La Curée) from 1857 is more traditional, its dogs rather less integrated into the dark forest interior. I don’t know of any connection between this painting and Émile Zola’s novel of the same name, which was written over a decade later, in 1871-72.

Courbet continued to paint hunting scenes through much of the rest of his career, including Hunting Dogs with Dead Hare from 1857, in which he has re-used the same pair of dogs in almost identical poses. I suspect that these scenes were reliable sellers to those affluent enough to afford them.

Gustave Courbet painted portraits over this period too. This of the operatic singer Louis Gueymard (1822–1880) as Robert le Diable (1857) shows the last scene in Act 1 of Giacomo Meyerbeer’s opera Robert le Diable (1831). In this scene, Gueymard’s character Robert gambles away his entire estate on dice; in the opera this is marked by the aria L’or est une chimère: ‘gold is but an illusion’.

In the early autumn of 1858, Courbet stayed in Frankfurt, Germany, where he continued to paint. This wonderfully luminous View of Frankfurt am Main (1858) is rich in its reflections, and reminiscent of some of Dürer’s superb watercolours of Germany.

He also painted this Woman of Frankfurt, or The Lady on the Terrace that same autumn. It’s claimed that this shows one of the local gentry, Caroline von Bernus (1843-1918), the daughter of a local senator, who was shortly to marry Wilhelm von Erlanger (1835-1909) in the city.

Was this the model who was standing next to Courbet in The Painter’s Studio, asleep beside the painting he had been working on then?