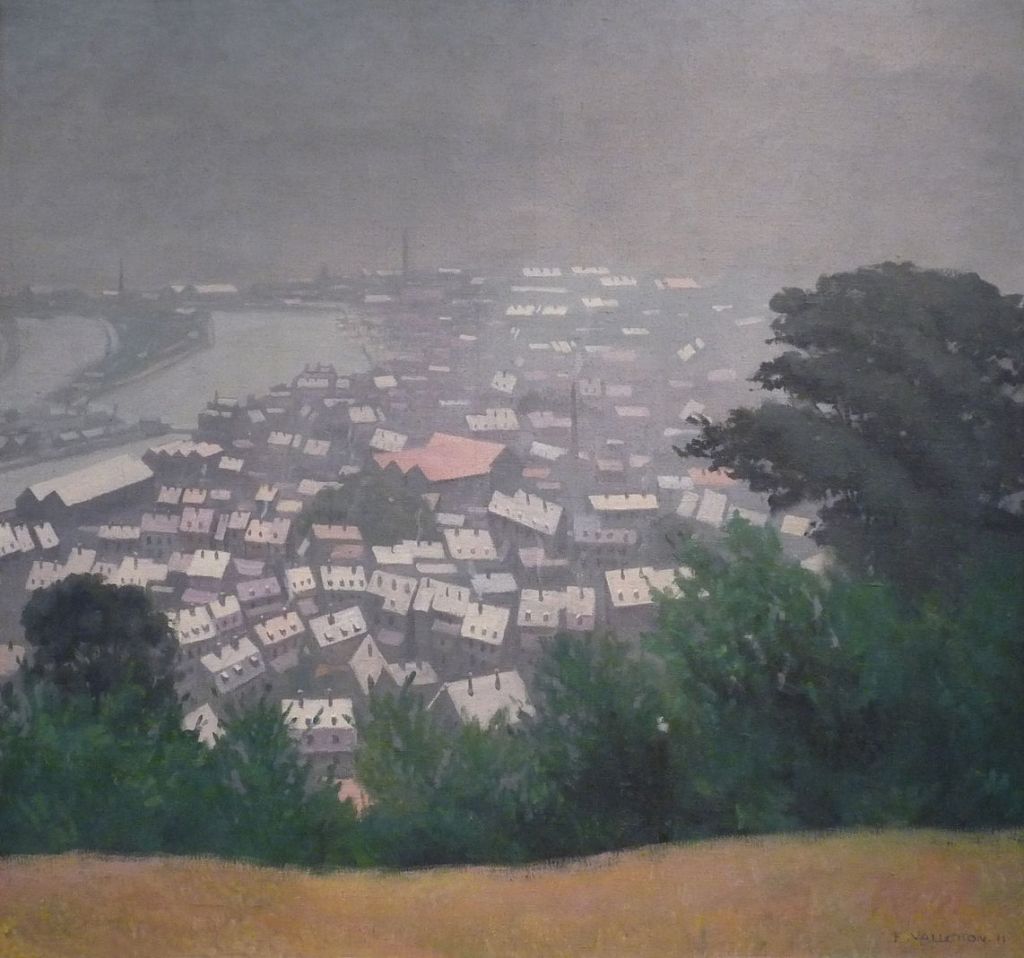 In the first few years of the twentieth century, the former Nabi painter and print-maker Félix Vallotton (1865–1925) had concentrated on painting mysterious interiors, as well as portraits and other figurative works. Although those interiors often seemed to be ‘problem pictures’ hinting at narrative, I’ve been unable to find any earlier works in which he told stories from classical myths.

By 1907, when Vallotton painted his Orientalist Le Bain turc (The Turkish Bath), his figures had become very modern in appearance. With their tied-up hair, it would be easy to mistake this as a painting from fifty years later.

That same year, he started painting scenes from classical myth, here Andromeda Standing with Perseus (1907). This shows the sea monster Cetus heading for a defenceless Andromeda, as hero Perseus charges to her aid through a cleft in the black sky. He has lost his classical attribute of the head of Medusa, and here rides the winged horse Pegasus and holds a knight’s lance. The horse’s wings form an edge to the black sky as it carves through the air. Each figure is colour coded: green for the sea monster, pink for the near-victim, and blue for the hero, against a straw-coloured sea.

The following year, Vallotton broke with convention again in his painting of The Rape of Europa (1908). In his clean and simplified account, we look out to sea as the naked Europa clambers onto the back of Jupiter disguised as a brown bull. Given the long-established literary and artistic tradition of the bull being white, this can only have been a deliberate choice on the part of the artist.

In addition to mythological narratives, Vallotton started to paint more landscapes, some of which are unusual and innovative, like La Mare, Honfleur (1909), which shows a pond at night near the north coastal town of Honfleur. The black plane of the water has ripples travelling from a point at the right edge. In the left foreground is a stand of long grass and weeds bowed over in an arc, and behind the blossom on a tree glows in the dark.

Vallotton returned to the story of Perseus and Andromeda in 1910, in his Perseus Killing the Dragon, which is no sequel to his earlier work. Here he catches the height of peripateia and action, as Perseus is slaying Cetus.

Andromeda, long freed from her chains, squats, her back towards the action, at the far left. Her face shows a grimace of slightly anxious disgust towards the monster. Perseus is also completely naked, with no sign of winged sandals, helmet of Hades, or any bag containing Medusa’s head. He is braced in a diagonal, his arms reaching up to exert maximum thrust through the shaft of a spear which impales Cetus through the head. The monster is shown as an alligator, its fangs bared from an open mouth.

Honfleur in Fog from 1911 isn’t a conventional view of this small port on the north French coast, as it looks down from Mont-Joli to the west of the town centre. It captures exactly the sort of transient effects that had been the concern of Impressionism, but in Vallotton’s distinctive style.

In Coquèterie (Sauciness) from 1911, we see a young woman still undressed in her white chemise, her unmade bed behind. She looks at herself in the mirror of a small dressing table, wondering how she should dress.

In 1913, Vallotton returned to transient atmospheric effects in Night With Light Fog. Influenced by his print-making, he distils this scene into simple geometry, with almost two-thirds of his canvas the vague purple forms of the town and sky, and three simple bands below it. The lone lamppost and figure at the extreme left restore context.

He painting this Self-portrait in a Dressing Gown at a turning point, in 1914, just as the world was about to enter the Great War, and he was to enter his fifties. That is where I will start from in the next and final article in this series.