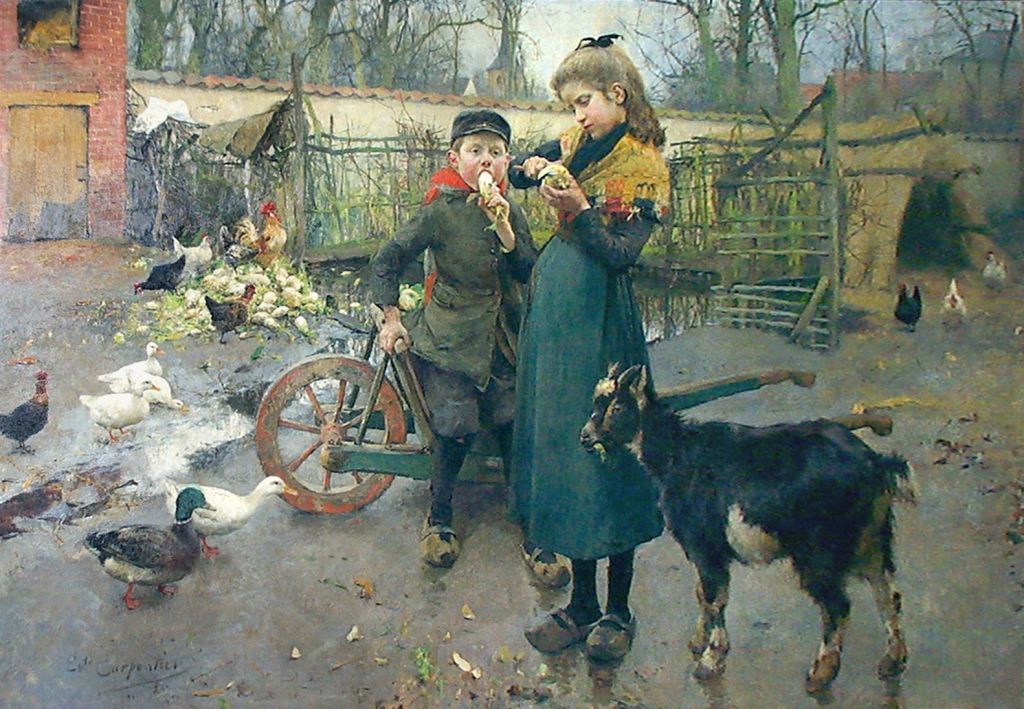 In many cases, you get a misleading view of an artist’s work if you remove it from the context of their development over their career. This is most apparent in the late nineteenth century, where so many painters worked in academic style as students, and progressed through several other styles by the time that they finished painting.

One excellent example is the Belgian artist Évariste Carpentier (1845–1922), whose paintings of the war in the Vendée I featured last weekend. This weekend I’d like to set those into the context of his career, which took him from history painting, through Naturalism, to Impressionism (and/or Luminism if you wish).

Carpentier was born into a farming family in the country town of Kuurne in Belgium, in 1845. At the age of only sixteen, he started studies at the Academy of Fine Arts in the regional capital, Kortrijk or Courtrai, where he excelled, earning himself a place at the Royal Academy of Fine Arts in Antwerp three years later. He completed his studies there and established his studio in Antwerp in 1872, where he painted commissioned religious and history works, exhibiting from that year onwards.

Among his friends in the 1870s was Emile Claus, who for three years shared Carpentier’s studio. However, Carpentier had been suffering from an old knee injury, which worsened to the point where amputation became a threat. He shut his studio in Antwerp and returned to Kuurne, where his sister nursed him.

In 1878, Carpentier painted The Flight of Royalists, an overtly anti-Republican work showing a Royalist family fleeing from massacres in the Vendée in 1793.

The following year, on medical advice, he went to stay in the south of France to help his leg recover. In 1880, he travelled back to Paris, where a friend from Antwerp persuaded him to share his studio. At the time, the theme of the war in the Vendée was becoming popular, and in 1881 he painted further works depicting them, in particular his Refugees, which proved so popular that it was reproduced as a chromolithograph.

Carpentier had long painted country scenes and farm animals, but now seems to have started painting populated landscapes, including this view of the beach at Le Tréport, Bathing Time in 1882. Le Tréport is a small resort on the Channel coast of France near Dieppe, which had become a popular place to ‘take the waters’. At this stage, the artist seems to have been more interested in those who went to bathe than the coastal scenery around them.

Carpentier continued his successful run of paintings of fighting in the west of France during the Revolution with Routed Chouans in 1883, showing a couple of ill-equipped Royalists in retreat during the winter, to the north of the River Loire.

He also celebrated the guerilla tactics of the Royalists in Chouans in Ambush (c 1883), showing a scene from a small battle near La Gravelle, which most probably occurred in 1794. The last of those history painting which I can find is a tense indoor scene in his The Alert of 1884.

That was a momentous year in painting in France, when Jules Bastien-Lepage dominated the Salon before his health suddenly collapsed and he died in December at the age of just 36. Carpentier abandoned history painting, preferring Naturalist genre scenes, and returned to Belgium in 1886.

Although Carpentier is said to have devoted himself to plein air landscape painting once he was back in Belgium, the paintings of his which remain accessible are overwhelmingly genre narratives which are very Naturalist in style. The Foreigners shows a timeless situation: the arrival of outsiders in a close-knit community.

At the right, sat at a table under the window, a mother and daughter dressed in the black of recent bereavement are the foreigners looking for some hospitality. Instead, everyone in the room, and many of those in the crowded bar behind, stares at them as if they have just arrived from Mars. Even the dog has come up to see whether they smell right.

This was painted by Carpentier at Kuurne in 1887, exhibited in Brussels that year, and purchased from that exhibition for the Royal Museums of Fine Arts in Belgium.

Visiting the Convalescent was probably painted in that same year, and shows a large group of friends and relatives visiting a woman who is convalescing from an illness – a popular motif and optimistic relative of the sick child theme. Carpentier includes many closely-observed details, including a crucifix, candles and other items on the mantelpiece, and pot plants on the window-sill.

I suspect that Carpentier painted Pigeons at around this time too. This is a more modest living room, in which a mother and two children appear to be luring pigeons in with grain thrown on the floor, so that they can presumably be killed, plucked, and cooked in the large pot seen on the traditional stove at the left.

The Reprimand is also undated but appears to be from the same period in Carpentier’s stylistic progression. This family is visibly poorer, their son sat on the corner of a simple table with one of his wooden clogs dropped onto the floor. Dressed in multiply-patched clothing, he is being reprimanded by a figure out of the image, beyond its left edge. His mother stands preparing food to the right, and his grandmother sits at the table. Even the family’s black and white dog faces towards the wall, as if in disgrace.

The one landscape from 1888 which I have found, Walk at the Seaside (Menton, 1888), is sufficiently detailed as to make it an improbable candidate for being painted en plein air, although Carpentier’s brushwork is becoming looser here. Menton is a resort on the Cote d’Azur, possibly where the artist had stayed back in 1879-80, although this view is clearly dated 1888.

Carpentier’s undated Eating in the Farmyard is even more Naturalist, its two children and goat almost photographic in appearance. This is the rural deprivation which originally inspired Naturalism.