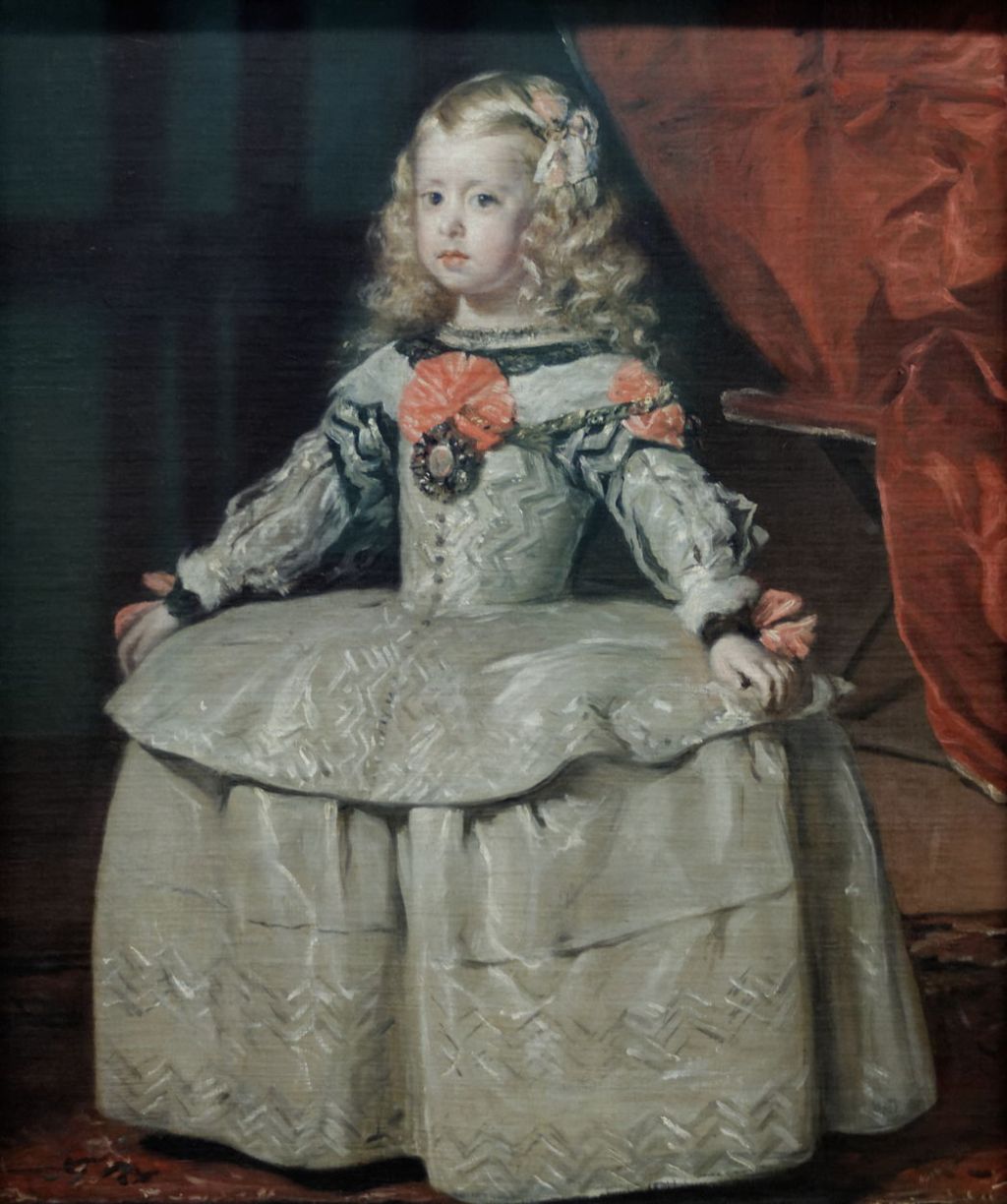 Soon after Diego Velázquez (1599–1660) had painted Las Hilanderas, he was arranging his second visit to Italy.

It is thought that another painting which he started prior to travelling was this modest and unfinished portrat of A Country Lass, also known as La Gallega, probably painted between 1645-50. Her face appears largely complete, but her clothing remains extremely sketchy, and her form only roughly outlined.

Quite why the senior painter at court would have painted this young woman’s portrait is anyone’s guess, but the painting seems to have come into the hands of the Marquis of Carpio, who was Spanish Viceroy in Naples, as early as 1651, and definitely by 1677.

Velázquez seized the opportunity of the king’s desire for more paintings for his palace in Madrid, and proposed that the artist should be sent to Rome and Venice to secure for him works by Titian, Veronese, Bassano and Raphael which would please the monarch. Velázquez was successful, and in November 1648 set off, reaching Genoa by sea in April the following year.

He made his way slowly to Rome, and on to Naples, purchasing several paintings and sculptures which are now in the Prado in Madrid.

When Velázquez was in Rome, he painted one of his most famous portraits, that of Pope Innocent X (1650). This is one of two portraits which are thought to have been made at the time; the second, of bust length, exists in several copies as well. Pope Innocent X was one of the most politically astute Pontiffs of the era, something which Velázquez’s painting seems to capture, and was in post from 1644 until his death in 1655.

It’s not clear whether Velázquez painted him from life. A collection of drawings claimed to be studies for this and his other portrait(s) suggest that the artist may have had to rely on sketches, but the source of those drawings remains in dispute.

Velázquez was notorious for his delay, and started to receive missives from Madrid that he should return by early June 1650 at the latest. However, the artist was clearly enjoying a spree of painting more varied portraits, and didn’t arrive back in Barcelona until June of the following year!

Back in Madrid, Velázquez returned to portraiture, which seems to have concentrated on the ladies and daughters of the royal family. This portrait of Queen Mariana (of Austria) painted in 1652-53 is the earliest of three surviving paintings of her that he made during the period 1652-57.

Queen Mariana of Austria was Philip IV’s niece, who married her uncle the king just before her fifteenth birthday in 1649. She died almost fifty years later, having survived the death of her husband in 1665, and the births of five children, including Philip’s successor Charles II. Mariana’s black dress is known formally as a guardainfanta, with a reputation for concealing pregnancies under its hooped skirts.

The detail below shows how even in such a formal royal portrait, Velázquez’s brushwork had become extremely painterly. Despite this unfettered application of paint, the fabrics appear very lifelike – a skill as remarkable as that of Rembrandt.

This portrait has a surprising secret, which was only revealed following its radiography: so similar were the Habsburg features of Mariana and Philip IV that Mariana’s head was actually painted over an unfinished portrait of the king.

In February 1652, Velázquez was appointed the Chamberlain of the Royal Palace by Philip IV, a very senior position at court which would have kept him busy. The king frequently came to Velázquez while he was painting in his workshop, often just for a quick chat. This was a remarkably close relationship between a monarch and his painter.

Then in about 1656, Velázquez painted this portrait of the Infanta Margarita, daughter of Queen Mariana, and later by marriage the Holy Roman Empress. She was born in 1651 in Madrid, and died at the age of only 21 in 1673, but still outlived three of her four children.

For Velázquez and his workshop, painting portraits of royal children was an important task. Many were sent overseas to other courts in the hope that they would encourage politically important arrangements for marriage. Infant and child mortality was also so high that, in many cases, those portraits were the most enduring records of their subjects’ existence.

The culmination of these portraits is his most famous painting, Las Meninas, or The Maids of Honour, its translation, or the more descriptiveVelázquez and the Royal Family, which he made in 1656-57. King Philip IV, Queen Mariana, the Infanta Margarita, other members of the royal circle, and Velázquez himself all come together in one of the most intriguing paintings of the century. I will look at this in detail in the next article.

Painted after the completion of Las Meninas was Velázquez’s last surviving narrative mythological painting, showing Mercury and Argus. This was probably completed in 1659, the year before the artist died, and was one of four mythological works which he made in these final years. Tragically, the other three were destroyed in the fire at the Alcazar Palace in Madrid at Christmas in 1734.

Although the best-known painting of this complex story from Ovid’s Metamorphoses, it is by no means its most direct or faithful account. In accordance with his earlier paintings of myths, its figures are shown in contemporary rather than classical dress. Mercury is just about to raise his sword and decapitate the sleeping Argus. Behind them is Io in the form of a tan cow.

The underlying story starts with Jupiter taking a fancy to Io, a virgin priestess to his wife Juno, which the god consummated in secret by enveloping Io as a cloud. When Juno suspected his infidelity, Jupiter hastily transformed Io into a white cow, to conceal her. Juno asked the god for that cow as a present, and once she had obtained it, put Argus Panoptes with his hundred eyes to watch over her rival for Jupiter’s affection.

Jupiter sent Mercury to distract the ever-watchful Argus. When Argus was finally asleep, lulled by Mercury’s pipes, Mercury cut Argus’s head off. This provoked revenge from Juno, and eventually Io was returned to human form in Egypt, where she became the goddess Isis.

For all its idiosyncrasies, Velázquez’s painting is a fitting conclusion to his narrative works.