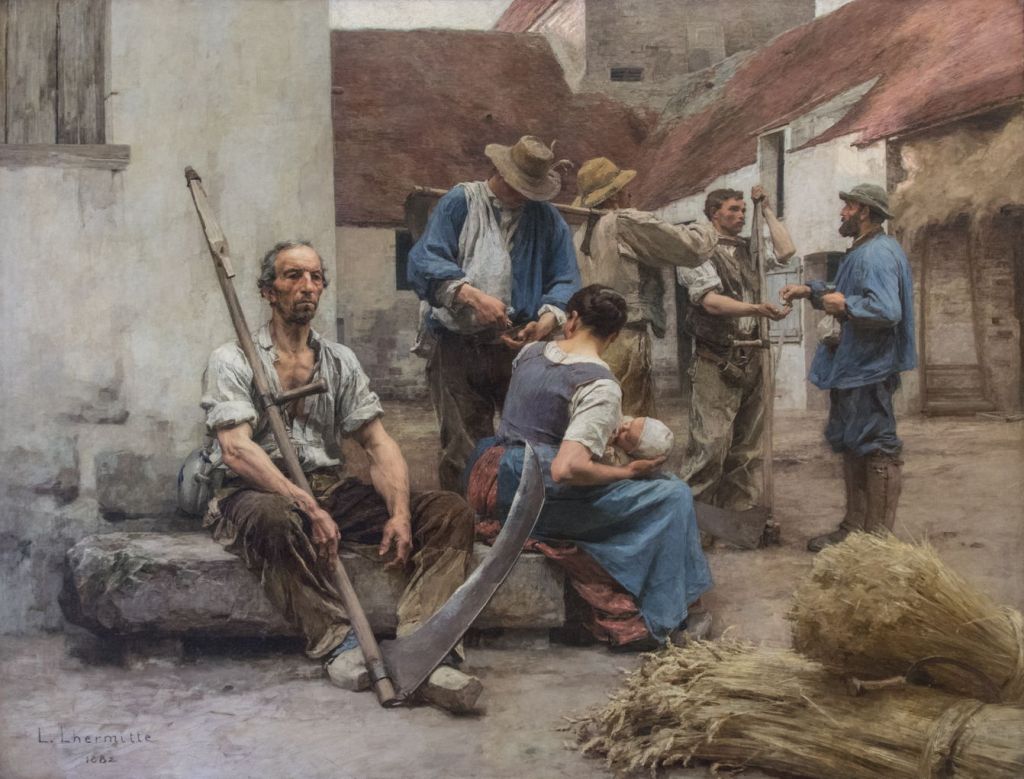 Having looked at the new wave of Naturalist paintings in the Salon of 1883, I proposed that their common characteristics include:

The earliest roots of these appear in genre paintings during the Dutch Golden Age.

These became popular in Dutch and Flemish ‘cabinet’ paintings, such as Gabriël Metsu’s Washerwoman (c 1650). This painting appears authentic and almost socially realist: the young woman is a servant, dressed in her working clothes, in the dark and dingy lower levels of the house. She looks tired, her eyes staring blankly at the viewer. Her expression is neutral, without any sign of a smile.

Genre painting then largely fell into disfavour. Jean-Baptiste-Siméon Chardin, now known better for his still lifes, continued to develop it in paintings such as his take on a Laundress in about 1735. This shows a more humorous view of life ‘below stairs’ in a contemporary household, with a small child in tatty clothing blowing a large bubble from a straw, and through the doorway a maid hanging clean washing on an indoor line.

Another important strand of development was the controversial, even politicised, contemporary event. Géricault’s monumental painting of The Raft of the Medusa made in 1818-19 is perhaps the most important example.

This shows a well-known and scandalous story of the day, in which over 130 people on board the French frigate Méduse died when they abandoned onto a makeshift raft. Just fifteen of the 147 people on that raft survived thirteen days before being rescued, and gave harrowing stories of drowning, dehydration, and cannibalism.

Although Géricault undoubtedly painted what was in his mind’s eye, he undertook considerable research, interviewing survivors and making studies of material from the morgue in his efforts to make this as objective as he could. This quest for objectivity was a major theme of the nineteenth century, spilling over from the sciences into creative arts, underlying many of the changes seen in painting.

Gustave Courbet took it up in the middle of the century, most notably in The Stone Breakers (1849), which was tragically destroyed by fire during the Allied bombing of Dresden in 1945. This painting was exhibited at the Salon in 1850, and established him as the great-grandfather of Naturalism.

Shown in the same year was his monumental A Burial at Ornans (1849-50), which brings some important lessons. This huge painting shows in remarkably unemotional and objective terms the funeral of the artist’s great uncle in the small provincial town of Ornans. The event took place in September 1848, but the painting gives the impression that it is a faithful record.

Courbet actually painted the work entirely in the studio, using those who were present as models. It shows a moment which could only have existed in the artist’s memory: like Géricault’s Raft of the Medusa, it doesn’t necessarily represent an image which ever existed in reality. But it has been carefully researched, imagined, composed, and painted to give the impression of accuracy and objectivity, rather than some Romantic fantasy.

At the same time, social realism was arriving on the farms of France, thanks to the paintings of Jean-François Millet.

Millet’s The Sower was completed in 1850 and shown at the Salon that year; it has since been recognised as his first real masterpiece. This farmworker is striding across a field, sowing seed for the summer’s crop. In the distance to the right, caught in the sunlight, is another worker ploughing with a pair of oxen.

Millet’s The Gleaners of 1857 is sparse, concentrating on just three figures. There are no distractions: it is about the rural poor, who made ends meet by salvaging scraps after the harvest had been cut. This is unavoidably about poverty, and the sector of the population who only just managed to survive each winter. It smacked of socialism, and got the thumbs-down from the rich and middle classes when they saw it in the Salon that year.

Millet followed that with L’Angélus (The Angelus), completed around 1857-59. This had been commissioned by the American collector Thomas Gold Appleton, as Prayer for the Potato Crop, but underwent modification before Millet gave it its present title. At some stage, it is thought to have included a child’s coffin, but that was overpainted.

It shows a couple, praying the Angelus devotion normally said at six o’clock in the evening, over the potatoes they have been harvesting. It is dusk, and as the last light of the day fades in the sky, the bell in the distant church (whose steeple was a late addition, after Appleton failed to collect the painting from Millet) is ringing to mark the end of work, and the start of the evening.

Next to the man is his fork, which he has been using to lift potatoes from the poor, stony soil; his wife has been collecting them in a wicker basket, which now rests at her feet. Behind them is a basic wheelbarrow, which has a couple of sacks of potatoes on it, ready to be taken home. In the gathering dark, viewers often misread the barrow and think that it contains a small child.

Jules Breton was also important, more in his compositional devices than in any social realism, though. His Gleaners from 1854, which was highly successful at the Salon of 1855, is a marvellous painting, but hardly the story of people who spent most of their lives on the edge of survival. But its foreground detail, high horizon and widescreen effect were to be used very successfully by Jules Bastien-Lepage and others.

Another important artist in the late gestation of Naturalism was Édouard Manet, long considered to be a precursor of Impressionism, but who was thoroughly realist.

Manet’s Olympia (1863) shocked those seeing it at the 1865 Salon because here was an ordinary person, a ‘common prostitute’ indeed, seen in a role normally assigned to a mythical goddess such as Venus. And she was very much at her place of work, staring straight at the viewer.

A decade later, Manet painted the same model, Victorine Meurent, in The Railway (popularly known as Gare Saint-Lazare) (1873). A genre symbol of modernity, it brought modern technology and urban life to what was at the time a largely unappreciative public.

For me, the immediate precursors to the Naturalist paintings I showed from 1883 were not the early works of Jules Bastien-Lepage, formative though they were in his own brief career, but the paintings of the rural poor by Léon Augustin Lhermitte.

Lhermitte’s sketchy Procession near Ploumanac’h from 1879 shows a religious festival in Brittany, with a small stream of locals making their way along a track on the open hillside towards the church. Its unabashed and unemotional bleakness is quite different from the densely-populated processions being painted by Jules Breton.

Lhermitte’s founding masterpiece of Naturalism is The Harvesters’ Pay from 1882, which looks objectively at the economic and social aspects of the harvest. Four of the harvesters, bearing their heavy-duty scythes, await payment by the farmer’s factor, who holds a bag of coins for the purpose.

In the centre of the painting, one of the workers is counting out his pay in front of his wife, who is feeding a young infant at her breast. To their left, another worker just sits and stares blankly into the distance, dead-beat tired and wondering whether his pittance was worth all that effort.

Most importantly, Lhermitte painted these in the early years of the Third Republic, a time when social concerns were sweeping across much of Europe.

In the next article, I will look at how Naturalism spread beyond France.