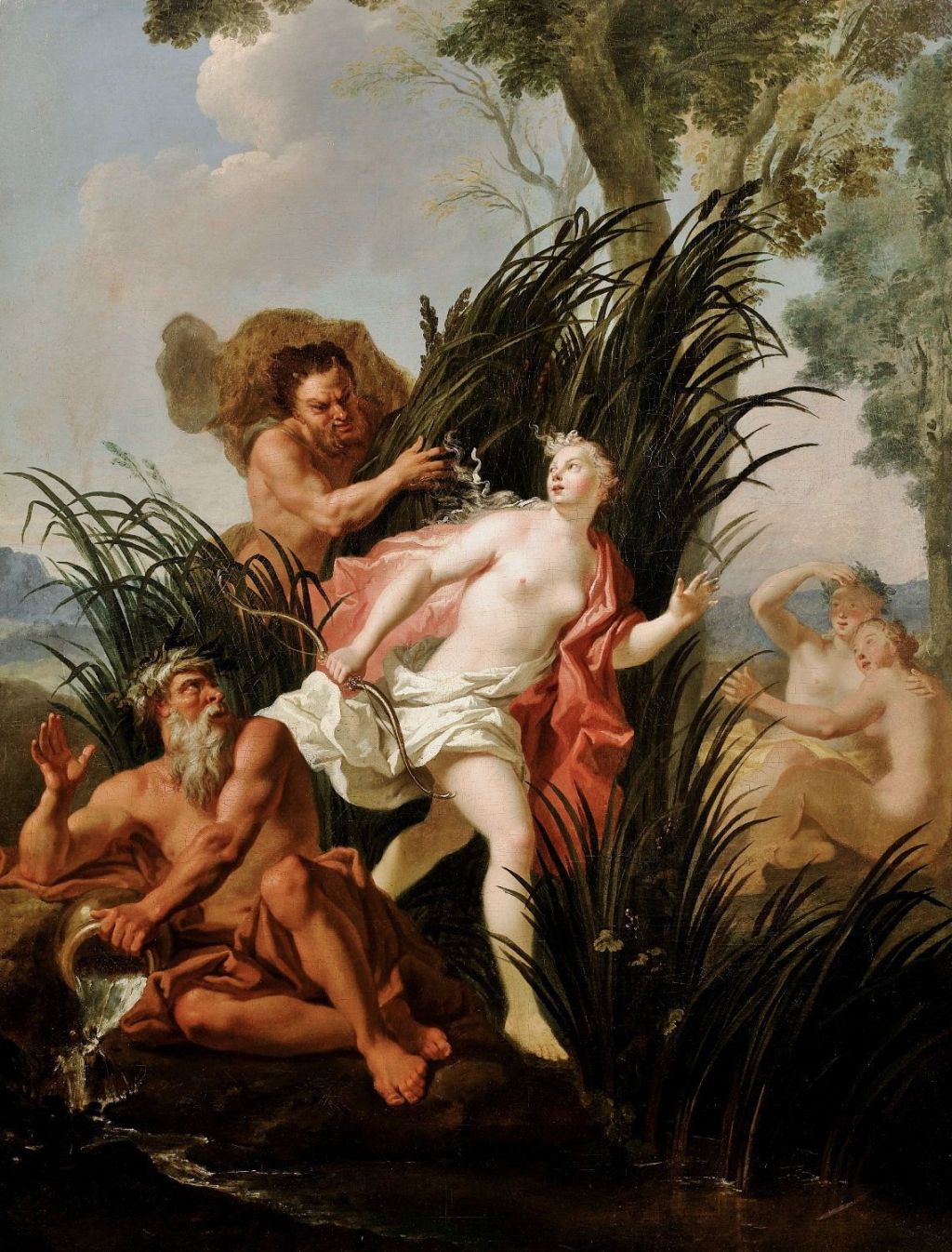 Narrative painting of classical myths has quite a few conventions, although these days they’re not easy to find described. One which often confuses the unwary is the symbolism of river gods and their attendant nymphs. As a preface to tomorrow’s look at paintings of Ondine (or Undine), here’s a short survey of some classical river deities.

In Greek, and subsequently Roman, mythology, the river gods or Potamoi (the Greek for rivers) were three thousand sons of Oceanus, the great river which encircled the earth, and Tethys, his Titan sister and wife. A river god was both that river and a distinct deity: Achelous was the god of the River Achelous, the largest in Greece, who wrestled unsuccessfully with Hercules for the right to marry Deianira.

Associated with sources and bodies of fresh water were also water nymphs, Naiads or Potamides, often stated to be the daughters of the river gods. In ancient times, there was a weaker distinction between fresh and salt waters, so although nymphs associated with the sea are usually Nereids (Mediterranean) or Oceanids, Naiads can also be encountered in what we would view as the sea.

The standard depiction for any river god in a painting of a classical story is of an older bearded man lounging by a large earthenware pot from which water pours forth into the river. This is shown well in Santi di Tito’s fresco of The Sisters of Phaethon Transformed into Poplars, from about 1570. Although this story tells how the sisters of Phaeton grieve for him after his death, and are transformed into poplar trees, as it shows a river, there must be a river god.

Rubens’ delightful painting of Romulus and Remus being discovered by Faustulus, from 1615-16, shows both a river god, in this case Tiberinus, and his daughter nymph, at the left with the god’s pot.

In Nicolas Poussin’s Cephalus and Aurora from 1630, the river god is again at the left, and looks tired of the whole business, with barely a trickle of water emerging from his pot.

This beautiful painting attributed to Luigi Garzi, of Alpheus and Arethusa from around 1690, shows one river god and two nymphs. The god leans on his pot, and in his left hand holds a small spade, another attribute sometimes associated with them.

Antoine Coypel’s version of the same Ovidian myth, Alpheus Chasing Arethusa from about 1710, places the river god at the lower left, and two naiads separately on the right.

So far, the river deities have enjoyed a rather passive life in paintings, but this wasn’t a requirement. In François Boucher’s Pan and Syrinx from 1743, the nymph Syrinx is seeking the help of the river god and Naiad, as she attempts to evade Pan’s attentions. The god’s pot is almost hidden beneath luxuriant red fabric, under his right hand.

In Tiepolo’s Apollo and Daphne (c 1744-45), the river god is given much of the foreground and lower section of the painting, and holds an oar or paddle, a more unusual but quite distinctive attribute.

Sometimes, artists conceal the river god as if challenging the viewer to locate him. This is the case in Anton Raphael Mengs’ fresco of Apollo, Mnemosyne, and the Nine Muses (1761), in which the god’s bearded and hoary figure is tucked away behind Apollo’s legs. There is also an Orphic tradition in which the River Mnemosyne is the source of water to bring inspiration, and this is perhaps an allusion to that obscure sub-narrative.

In some paintings, river gods seem to be included even though their river is nowhere to be seen. Nicolas-Guy Brenet’s painting of Aethra Showing her Son Theseus the Place Where his Father had Hidden his Arms (1768) tucks this extra at the lower left corner again.

Martin Johann Schmidt’s Labour of the Danaides (1785) informs us that the Danaïds were also water-nymphs by placing a river god at the left. They were condemned to keep trying to fill this leaky container with water as their penance in the underworld.

Walter Crane shows the association between Naiads and other nymphs in his watercolour of Nyads and Dryads, probably painted between 1880-1900. He melds the Dryads in with their trees, puts the ‘Nyads’ or Naiads in the water, and has a river god watching from the reeds in the distance.

By the end of the nineteenth century, enthusiasm for the tradition of showing river gods was waning, and nude, cavorting Naiads came to the fore. One of their greatest exponents was John William Waterhouse, who led with this first tentative retelling of the myth of Hylas in 1893, in A Naiad, or Hylas with a Nymph.

Hylas was companion and servant to Heracles (Hercules), who accompanied the hero on Jason’s ship Argo. When the Argonauts were ashore in modern Turkey, Hylas approached the spring of Pegae, where the Naiads fell in love with and kidnapped him. He vanished without trace, driving Heracles and Polyphemus to search for him at length. They were delayed in this so long that the Argo sailed without them.

This first version shows one of the Naiads discovering the sleeping Hylas by a small river. There is no sign of any river god, but there are some goats on the right side of the painting.

Three years later, Waterhouse’s Hylas and the Nymphs (1896) stays much closer to the myth. Hylas holds an earthenware pot, almost as if he were about to become the river god.

In January 2018, this well-known painting was removed from exhibition in Manchester, England, and replaced by a notice which explained that a temporary space had been left “to prompt conversations about how we display and interpret artworks in Manchester’s public collection”. The painting soon returned after protests. It is surprising that, more than a century after it was first exhibited, it was still capable of causing such controversy.

Waterhouse is not the only artist to have courted controversy with this story. Henrietta Rae’s Hylas and the Water Nymphs from about 1909 was exhibited at the Royal Academy in 1910, and is no less fleshly than Waterhouse’s version. Rae was a pioneer in her painting of nudes, at a time when most of society still considered that women shouldn’t be allowed in life classes.

Edward Poynter’s Cave of the Storm Nymphs (1903) might appear to be still more exploitative of the male appeal of the female nude, but there is a more complex narrative behind this scene.

Its literary reference is most probably to the Naiads of Homer’s Odyssey, book 13, who live in a sea cave, updated to encompass more contemporary references to Wreckers, who lured ships onto the rocks in order to steal their precious cargos – sirens without the socially unacceptable habit of cannibalism.

Tomorrow, I will look at Undines, a more modern alchemical manifestation of water nymphs, and an inspiration for tales, music, and some fine paintings.