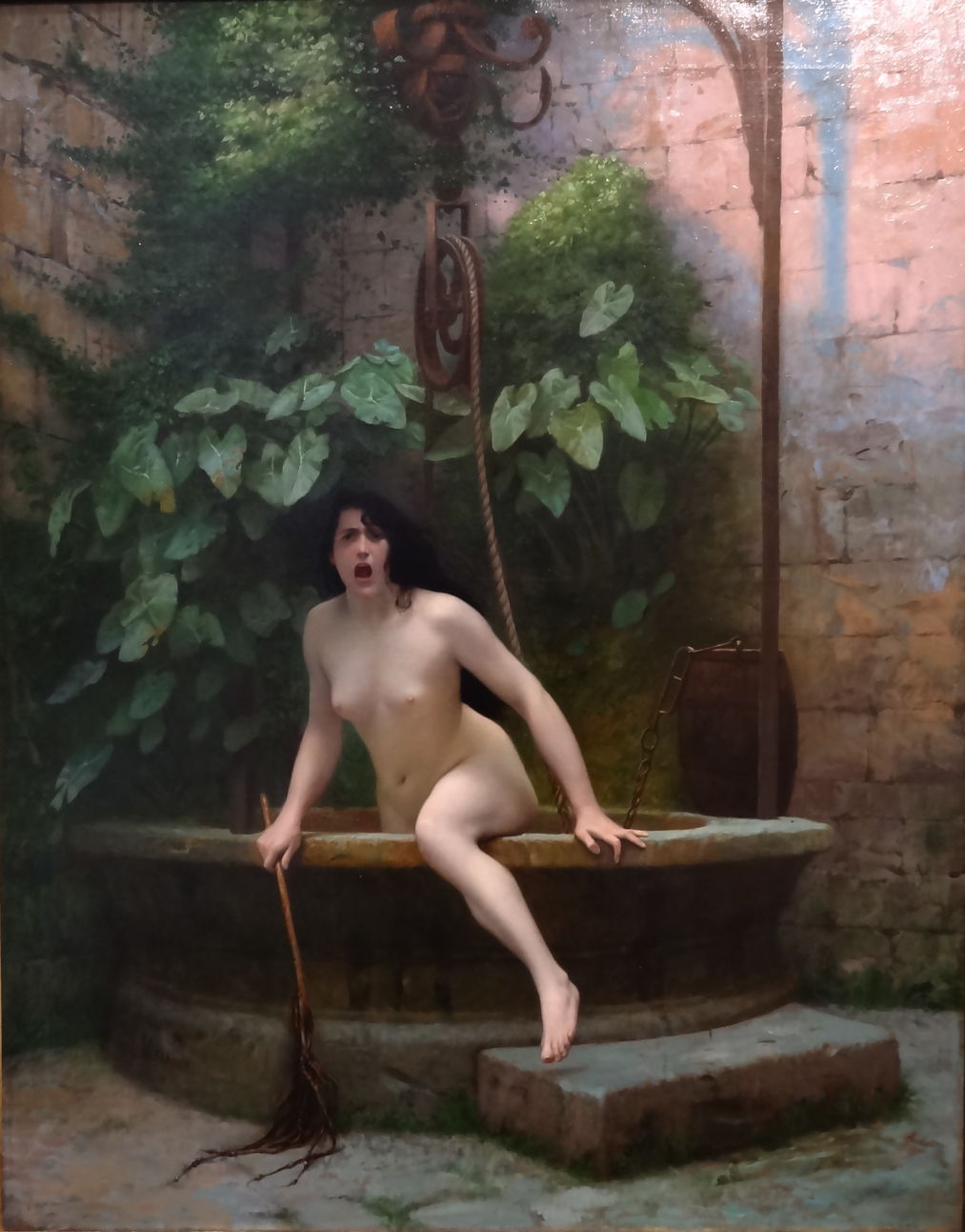 During the later years of Jean-Léon Gérôme’s career, he devoted much attention to the rising Impressionists – whom he vehemently opposed – sculpture, photography as an art, and the depiction of truth.

For someone who had devoted his career to the exercise of the high craft of painting in oils, and who had taught it to so many students, I think that Gérôme considered the Impressionists were neither painting ‘the truth’, nor telling ‘the truth’. He knew that their works, now selling well and becoming as valued by the market as his own, were neither faithful representations of what the artists saw, nor spontaneous ‘impressions’ dashed off at the height of sensory experience.

Gérôme’s painting fed his sculpture, and he painted his sculpture both literally (many of his works are in polychromed marble) and on canvas. He was also an early and enthusiastic photographer, who helped establish photography as a fine art at a time when most painters were hoping that it would just go away and leave their business alone. Together with his former pupils Jules-Alexis Muenier and Pascal Dagnan-Bouveret he used photography in his painting, and as an art in its own right.

In 1874, archaeologists discovered large numbers of polychromed cast terracotta figurines in the Boeotian town of Tanagra. These dated from Greek civilisations active there during the late fourth century BCE, and their quantity and quality impressed many, including Gérôme.

Having painted the story of Pygmalion and Galatea in 1890, Gérôme moved on to two works in which he built imaginary worlds around the Tanagra figurines. Sculpturae Vitam Insufflat Pictura (Painting Breathes Life into Sculpture) (1893) combines his own love of polychrome sculpture with a celebration of those archaeological discoveries.

In doing so, Gérôme progresses his long-running theme of visual revelation and truth, with these painted miniature humans, mimicking reality, and the wooden box of masks in the foreground. Several of the figurines refer to his own painting and sculpture.

As a painting, I don’t think that his Atelier of Tanagra (1893) is as effective and convincing as the previous work, but its wider range of figurines gives deeper insight into what Gérôme was thinking about. Several of the figurines shown here are his own polychrome sculptures – most obviously that of the naked woman sitting on the top of a blue pillar, in the centreline of the painting.

In The Artist’s Model (1895), Gérôme paints himself at work on his marble figure Tanagra (1890), currently in the Musée d’Orsay, which he had already included among the figurines in his Sculpturae Vitam Insufflat Pictura. He thus painted himself making a sculpture which he had previously painted in a painting as a sculpture. Not only that, but his model is his favourite Emma Dupont, who over a period of twenty years posed for many of his best-known Orientalist and other works.

Scattered in the image are reminders of gladiatoral armour and other props used for his paintings, one of his paintings of Pygmalion and Galatea, together with one of his polychrome sculptures of a woman with a hoop, at the right edge. In this single image, Gérôme has captured much of his professional career.

He then revisited two classical myths, telling them in unusual if not unique ways.

Diana and Actaeon (1895) shows the Ovidian myth of Actaeon, a young hunter who stumbles into the goddess Diana when she is bathing in a pool with her followers. She splashes him with water which transforms him into a stag, which is then torn apart by his own hunting dogs.

This is a myth which has been painted countless times by many masters of narrative, and Gérôme would have been familiar with many older and more recent depictions. What he has painted appears to show quite a different story, though: Diana and her court are bathing in a lake, but descending on them from the top of a hillock on the left is a contemporary hunt in close pursuit of a stag, which has just entered the water and is heading rapidly towards the alarmed women.

Perhaps Gérôme intended us to read the stag as being the already-transformed Actaeon, but it is too far away from Diana, and too early in the action, for such a transformation to have occurred. Maybe he is just experimenting with time and order in narrative.

Leda and the Swan (1896) is another favourite story from painting, this time not drawn from Ovid’s Metamorphoses, but direct from Greek mythology. In order to seduce the beautiful Leda, wife of Tyndareus the King of Sparta, Zeus assumes the form of a swan. Visual representations have almost always shown Leda embracing the swan, if not in the act of copulation.

Gérôme instead shows over twenty young children, some of them winged amorini, bringing the swan to Leda, as she wades into a river. Although consistent with the myth, it is a very unusual treatment, particularly for someone who must have been so familiar with its history in painting.

At this time, Gérôme painted a series of works showing the personification of Truth. First, she was shown as a nude at the bottom of a well, either lying on the ground, or standing with a mirror in her hand. Sadly, those have been lost, or remain inaccessible now. The version which has survived is probably his last, a painting which was so dear to Gérôme that he kept it close by in his studio up to the moment of his death.

Truth Coming out of her Well to Shame Mankind (1896) is based on a quotation from Democritus, “Of a truth we know nothing, for truth is in a well” (or, more literally, ‘in an abyss’), but knowing that reference is of little help in understanding these paintings.

Gérôme had given one of the earlier paintings the title of Mendacibus et histrionibus occisa in puteo jacet alma Veritas, which translates as ‘The nurturer Truth lies in a well, having been killed by liars and actors’. In this last version, she has climbed out of the well, and instead of bearing the customary mirror, she brandishes a whip with which to scourge us.

It is often suggested that this series of works relate to the Dreyfus affair in France, but as they predate Zola’s famous article J’accuse! of 1898, that is unlikely. I agree with more recent proposals that this Truth is the culmination of his themes of what is seen, visual revelation, and truth, particularly to nature. It is, perhaps, his last word on Impressionism, and his final defence of his life-long painting style.

Gérôme used the same allusion in his preface to Émile Bayard’s posthumous collection of collotype plates of photographs of nudes, Le Nu esthétique. L’Homme, la Femme, L’Enfant. Album de documents artistiques inédits d’après Nature, which was published in 1902:
Photography is an art. It forces artists to discard their old routine and forget their old formulas. It has opened our eyes and forced us to see that which previously we have not seen; a great and inexpressible service for Art. It is thanks to photography that Truth has finally come out of her well. She will never go back.