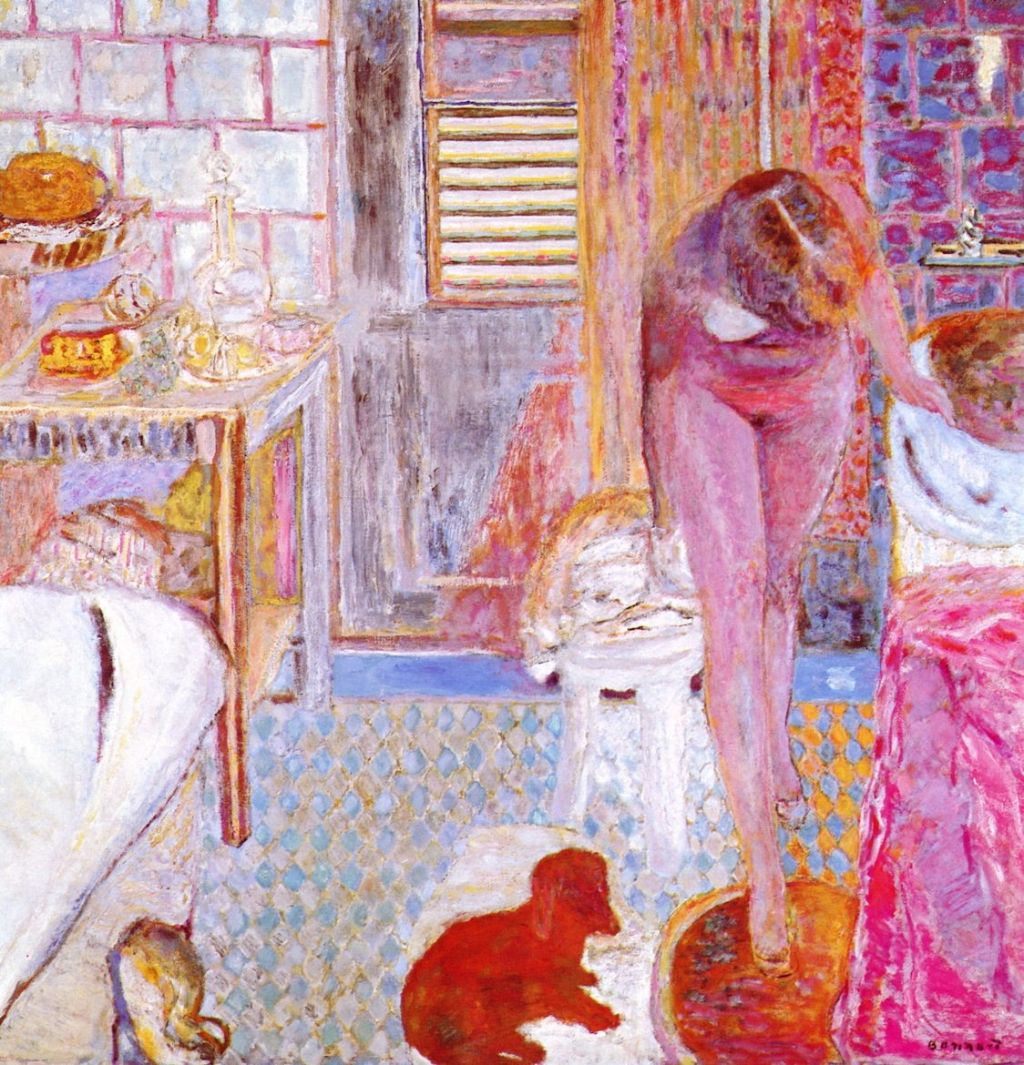 In 1931, Bonnard celebrated his sixty-fourth birthday, but showed no signs of easing off in his work. He divided his time between Arcachon, where he escaped from Marthe’s imposed social isolation, Paris, Vernon, and Le Cannet, ending the year back in le Midi.

His Self-Portrait of that year, also known as The Boxer for obvious reasons, contrasts with that of the previous year, in which he appeared gaunt, shy and retiring. Perhaps the freedom that he enjoyed away from Le Cannet had rekindled his fighting spirit.

He certainly continued his prolific output, with superb compositions such as The Breakfast Room (Dining Room Overlooking the Garden) (1930-31). This combines the still life of the laid table in the foreground, the powerful vertical framing of French windows, and the rich terrace landscape beyond. Ghostly repoussoir is provided by thin slivers of figures at the edges of his canvas. This reverses traditional composition in which figures would be central and the landscape form its repoussoir.

Of the surviving paintings from the 1930s which I have been able to locate, intimate domestic scenes and nude figures again predominate. The Toilette (Nude at the Mirror) (1931) is another piece of mirror-play which changes from his earlier practice: the nude stands in front of the mirror, but she is not seen in reflection at all, only directly. Instead, the mirror reinforces the verticals of the window and curtain off to the right.

Nude by the Bathtub (1931) shows Marthe leaning idly against a very deep bathtub. She appears to be surrounded by frosted glass, which on the right resembles the foam of a breaking wave.

In 1932, Bonnard avoided the summer heat of Le Cannet by staying in the north, at Vernon, during the hot months.

At first sight, White Interior from 1932 looks deserted. Outside it is late dusk, and the cool breeze has started to blow in from the balcony, through the open French windows. The table is busy, and on the far side of it is Marthe, almost blending in with the carpet. Interior white surfaces, including the door and a radiator, appear brilliant in the harsh electric light.

More of his paintings from these years were made in watercolour and gouache, like this Still Life with a Saucepan from 1930-32. The table top is now filled with signs of the preparation rather than consumption of food.

Marthe and much of the rest of Bonnard’s Nude in Bathroom (Cabinet de Toilette) from 1932 have become shockingly pink. Even her dog, sat by her feet, is strongly red-brown. Bonnard has returned to the Nabi style of not projecting the patterning of the floor according to perspective, flattening the lower third of the painting.

In 1933, Bonnard visited Arcachon and La Baule, but spent most of the year in Le Cannet, where he worked intensively.

Painted only two years after The Boxer, Bonnard’s Self-Portrait with an Open Collar (c 1933) appears more peaceful and less combative.

In Marthe in the Dining Room (1933), Bonnard’s wife slips silently past an open door in her favourite white high-heeled shoes.

At last, in about 1933, Bonnard returns to his earlier mirror-play in his Nude before a Mirror. Marthe (presumably) stands slightly to one side of a full-length mirror, the yellow light catching her back, buttock, and thigh. Instead of her head being cast down, almost obscuring her face, she looks at the mirror, and her reflection looks back at the viewer.

This is, of course, optically impossible: both Marthe and the viewer are to the right of the midline of the mirror. The viewer could only see Marthe on the left side of the mirror if that mirror were angled so that its plane was parallel to Marthe’s shoulders. What Bonnard shows is really Marthe’s doppelgänger, not her reflection.

In 1934, Bonnard had another major exhibition of his work in New York, where a total of 44 of his paintings went on display in the Wildenstein Gallery, with its recent reputation for dealing in the works of major French Impressionists. He spent the summer months in the north of France again, at Bénerville, Trouville, and Deauville, on the Channel coast, then returned to Le Cannet for the autumn and winter.

The following year, Bonnard undertook a long motor tour in his car, travelling from Le Cannet to Trouville and Deauville on the Normandy Channel coast. He visited Lyon, Nevers, and Chartres on the way. After that, he travelled to London for an exhibition of his work there. He continued travelling in France through much of the rest of the year, apparently spending little time in Le Cannet.

Garden from about 1935 shows part of the Bonnards’ property at Le Cannet, apparently in late Spring or early summer with the flowers in full bloom.

Some of Bonnard’s watercolours reveal his continuing emphasis on form. In Still Life on a Red Checkered Tablecloth (1930-35), he shuns Nabi flatness by projecting the checkered pattern according to perspective again, rather than laying it flat as if decoration.

In other paintings, though, Bonnard appears to have lost form and projection altogether. Still Life with Mask (Coi de table, ‘Tabletop’) painted in about 1935 abstracts colours and textures, making it hard for the viewer to reconstruct anything in the third dimension.

For much of 1936, Bonnard lived and worked in Deauville at the appropriately-named Villa Plein Air, only returning to Le Cannet in the autumn, by way of another long motor tour through Dijon, Lyon and Aix-en-Provence. He was also invited, along with Edouard Vuillard and Ker-Xavier Roussel (former Nabis), to decorate the Grand Foyer of the Palais du Chaillot theatre (now the Théâtre National de Chaillot) in Paris.

One of only two paintings of Bonnard’s which I have found dated to 1936, The Pedicure shows Marthe attending to her footcare, sitting on a chair beside the bed. The following year, though, saw the return of more of his wonderful landscapes from the north and south of France.