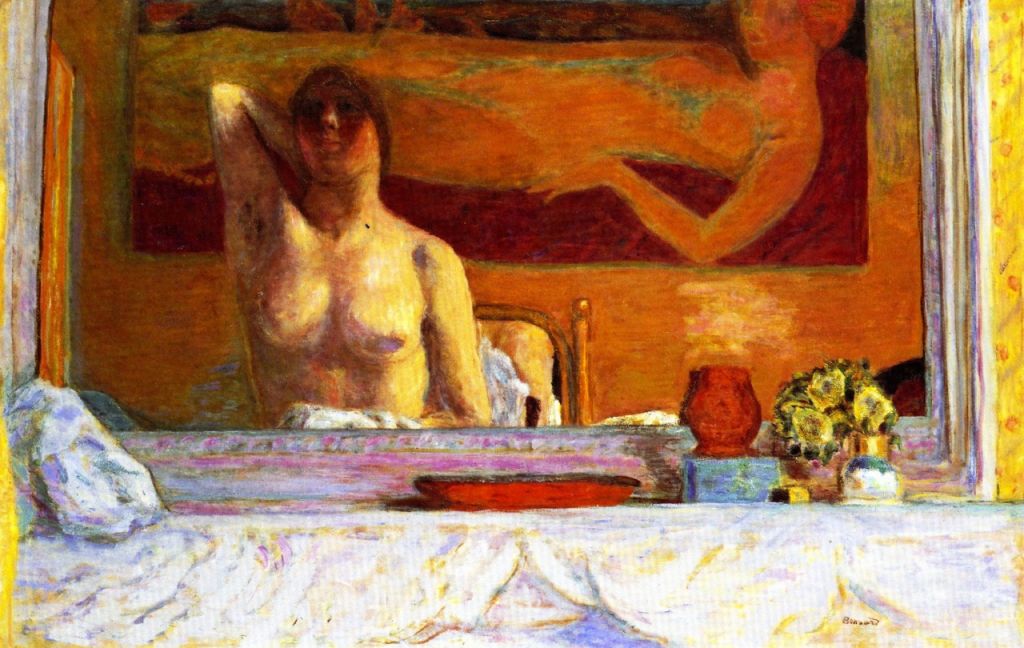 During 1915, Pierre Bonnard divided his time between working in Saint-Germain-en-Laye, and being in Vernon (mainly, perhaps, at his house in Vernonnet – the two places being almost synonymous). The main event of the year was Marthe starting to paint; with Bonnard’s encouragement, and his introduction of her to the painter Louise Hervieu, she took this quite seriously, signing herself as Marthe Solange.

The Garden at Vernonnet (1915) is a colourful dusk view of the wild flowers growing there in what was probably the early summer.

In Summer Sky (Ma Roulotte, Vernonnet) (1915), Bonnard gives a clear view of their retreat, nicknamed Ma Roulotte (‘my caravan’), which was built on piles on the bank of the river Seine.

Bonnard’s Earthly Paradise from about 1915 is a pastoral fantasy of a grand old tree which has grown out like a huge cabbage. Perched on a branch is a brilliant red and green bird, looking as if it has come from the Amazon rather than northern France. Under its canopy are two nudes: one on the left has long golden hair and appears to be Eve. She is about to pick an apple, and a serpent-like creature is watching her. The woman on the right, who more closely resembles Marthe, is lying on her right side, her head propped against her right arm, apparently asleep.

Three of his Five Characters (c 1915) are prominent as they stand outside a building. The right shoulder of the man at the left seems to merge with or overlap the right shoulder of the woman with a cloche hat. At the left edge is a third woman, who fades into the wall behind, and may be Marthe. At the lower right is a fifth face, almost cropped off the canvas. The man appears to be holding out a woman’s blue handbag, just in front of the woman wearing a broad-rimmed blue hat.

Bonnard’s domestic scenes were less intimate this year. In The Provençal Carafe, Marthe Bonnard and Her Dog Ubu (1915), Marthe is sat at the table with an empty plate in front of her. The carafe of the title is a pale khaki and green colour, and there is an orange and two bananas in a shallow bowl.

I have previously remarked about the preparatory work which Bonnard made for these apparently spontaneous paintings. In the case of his Le Café (1915), London’s Tate Gallery has no less than three sketches made in graphite for a single resulting painting.

This pencil sketch for Le Café (Coffee) from 1915 shows Marthe sat at the table, with her dog Ubu alongside her, as she drinks coffee there. This appears to have been made by the artist from a standing position, on the opposite side of the table from Marthe. The tabletop takes the lion’s share of the view, and Bonnard has already given the cloth its rectangular pattern.

The finished painting of Le Café (Coffee) (1915) adds a second woman, whose head has been cropped off the top of the painting; closer examination of the painting has shown that she was added at a later date, when Bonnard moved the empty chair closer to Marthe. The woman in blue is reaching towards a glass on the table near Marthe’s left elbow.

Behind them is a tantalising glimpse of a large and colourful mural. The upright chair behind the dog casts a pale blue shadow on the structures beyond.

In his Nude before the Mirror (Bather) of about 1915, Bonnard inverts his mirror play with a small mirror mounted at head height. Instead of using the reflection as a picture within the picture, to reveal figures behind the position of the painter, the artist is here set well back and his model is close to the mirror, so that it frames her face. This transforms the painting by giving the figure a face, an identity, and a character, rather than just the expanse of flesh of her back.

In the summer of 1916, Bonnard holidayed at Saint-Nectaire, a small village in the Auvergne famous for its Brie-like soft cheese. He visited Switzerland in November, where the Hahnlosers of Winterthur were becoming collectors of his work, and became good friends.

Bonnard met Renée Monchaty, a friend of Marthe’s, and fell deeply in love with her; she modelled for several of his paintings, and threw Marthe into rages of jealousy on occasion. He also had an affair with Lucienne Dupuy de Frenelle, the wife of a doctor, who is the model for several other of his works. In October, the Bonnards moved to Auteuil in western Paris.

Now, even in northern France, Bonnard’s landscapes were full of vibrant colour, as seen in this view of a Boat on the Banks of the Seine (c 1916).

Garden at Vernon; Landscape by the Seine (c 1916) shows another view of the river during the early summer, the water surface rich with red-brown and purple, as well as deep blues.

The identity of Bonnard’s model in his Girl in Blue, with a Rose (c 1916) is unclear: she is too dark for Renée Monchaty, and doesn’t match the appearance of the black-haired Lucienne Dupuy de Frenelle either.

The Mantlepiece (1916) is a complex piece of mirror play. Bonnard has viewed this from an unusually low position, level with the surface of the mantlepiece and looking slightly up. Behind him is his nude model, who appears slightly odd as she is both lit and viewed from below. On the wall behind them is a very long painting of a reclining nude (which certainly doesn’t look like one of Bonnard’s works), below which is a dressing table mirror.

In this case, Bonnard appears to have used the reflections to bring together quite disjoint images into a single image.

From January to April 1917, Bonnard worked at Cannes, where he went sailing in Paul Signac’s yacht, the Sinbad. He was starting to think seriously of moving to le Midi to live.

When Pierre Bonnard visited le Midi, one of his ports of call was to the sculptor and artist Aristide Maillol, who had been a longstanding and very supportive friend to him. Maillol lived and worked in the coastal village of Banyuls-sur-Mer, at the far south-western end of the French coast, almost in Spain.

Hommage to Maillol, painted in 1917, is Bonnard’s tribute to his friend, although not on his death (Maillol died three years before Bonnard, in 1944). It naturally features sculpture, which I suspect is one of Maillol’s.

Teatime (1917) shows what appears to be a commonplace social event, the gathering of five women to talk together over afternoon tea. Given Bonnard’s relationships with some of them, you have to wonder what they are thinking. I believe that the small woman in the red dress is Marthe. The woman with her back to us, with black hair and a mid blue hat, is Lucienne Dupuy de Frenelle, whose skin is lilac in the shadow. The woman wearing blue and white next to Marthe may be Renée Monchaty, who was so distressed when Bonnard and Marthe married in 1925 that she shot herself in the heart.

Marthe is now seen bathing in a proper bath, with water running from the taps as if from a spring, in The Spring (Nude in the Bath) (1917). Bonnard’s emphasis on form over the previous years was paying off.