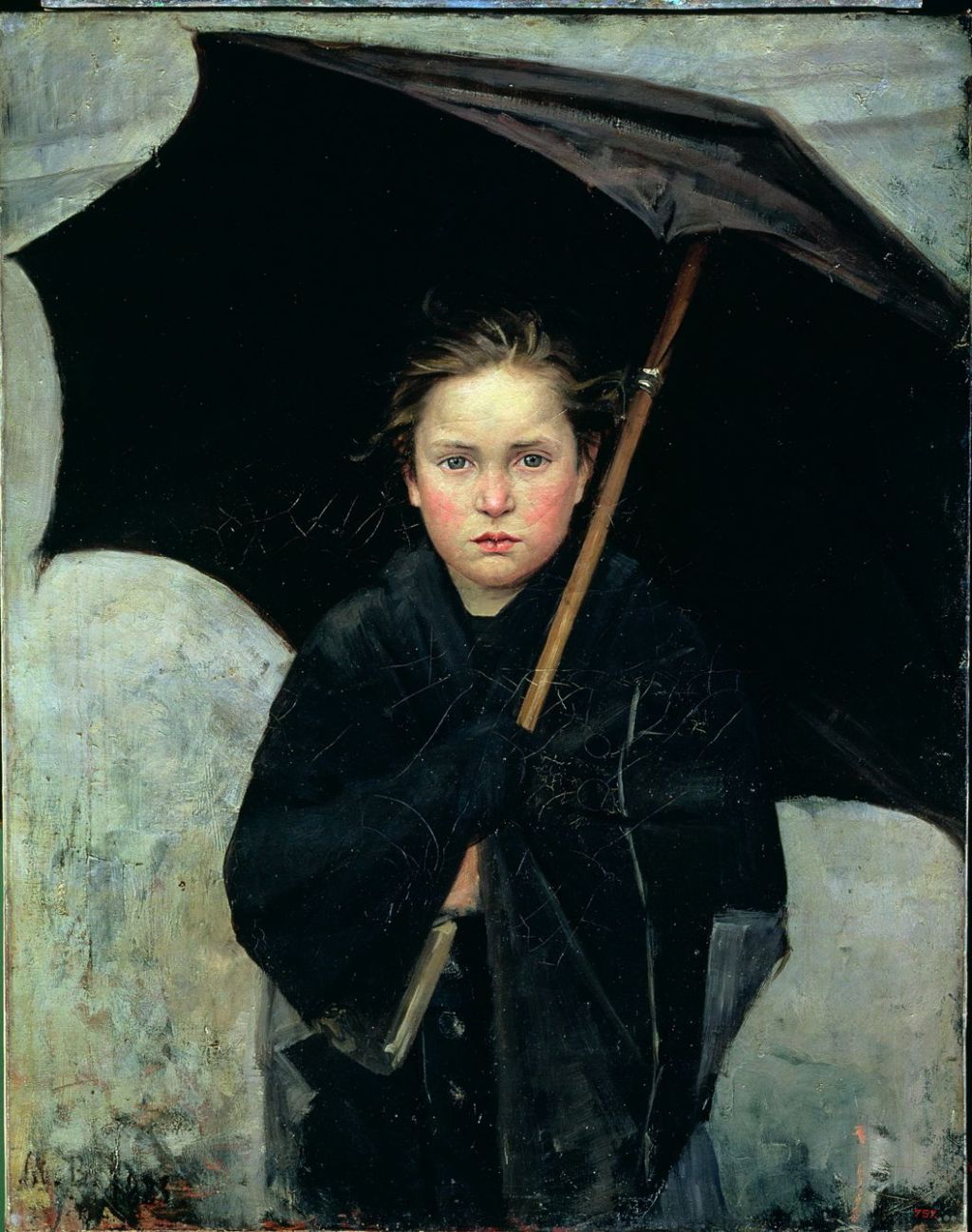 Now that Spring has arrived in the UK, so has the season of the umbrella. We shelter under it when we’re being treated to a Spring shower, and enjoy its shade on those increasingly hot and sunny days. In this article and the next I look at paintings of umbrellas, with the occasional person thrown in for good measure.

The origin of the umbrella is lost in the mists of time. They have certainly been around for a couple of millenia, in some form, but didn’t start to become popular until the eighteenth century. They have ecclesiastic relations in what is known as an umbraculum: a small canopy placed over someone like the Pope to indicate their importance.

It’s not immediately obvious whether the umbrellas in Louis-Léopold Boilly’s Passer Payez, or Pay to Pass, from about 1803, are intended to provide shelter from rain or sun. However, the family shown are just about to pay the man at the far left, so that they can walk across the muddy street on the comfort of the wooden plank on which they’re standing. This spares them and their clothing a coating of mud from the street.

Umbrellas grew steadily in popularity in Paris, and the painting below, Paris Street, Rainy Day (1877), is probably the first masterpiece to show them in such widspread use. Gustave Caillebotte’s study for that finished work below has survived and is shown above.

As the rain continues to fall, all the larger figures in the painting are shown holding umbrellas, most of which are standard black.

Realist artists like Jean Béraud painted street scenes in the capital, in his case forming a Paris chronicle. Out in the provinces, painters like Nicolas Sicard were doing the same. Sicard’s Entrance to the Guillotière Bridge in Lyon (1879) captures the scene at rush hour on a wet day, as many are rushing around under the canopies of their umbrellas. Note how even the cab drivers are sheltering under umbrellas: those operating open cabs normally provided them for their passengers too.

Just before the Norwegian Naturalist Christian Krohg went to Grez-sur-Loing in France, he seems to have visited Normandy, where he painted this view of a Village Street in Normandy (1882). Its curved recession of umbrellas with disembodied legs is very unusual.

Edgar Degas’ superb narrative pastel painting Waiting (c 1882) shows two women sat side-by-side on a wooden bench in a corridor or similar area within the ballet of the Paris Opera. Sat to the right of the dancer is a woman wearing black street clothing, holding an unrolled black umbrella, and with black walking or working shoes. Degas here invites the viewer to speculate and to construct their own narrative.

Jules Bastien-Lepage’s brilliant protégé, the tragically short-lived Marie Bashkirtseff, featured an umbrella in this, one of her best portraits, The Umbrella (1883). This girl’s tenacious stare at the viewer quickly becomes quite unnerving, an effect enhanced by the severe black background of the umbrella that she is carrying.

Pierre-Auguste Renoir’s The Umbrellas from about 1881-86 is packed not only with people, but their umbrellas too. In parts they are so crushed together that the taller pedestrians are raising them high, to avoid bumping into others. Together they form a dark blue-grey band between the people below and the grey sky above.

Just over a decade later, the post-Impressionist Maurice Prendergast found another jostle of Umbrellas in the Rain (1899) when he was painting in Venice. Here they are of any colour but dark grey, and form a brilliant arc across the painting.

Christian Krohg’s later painting is a strange one-off: The Umbrella (1902), a view looking down from the window of a building, on a lone woman. She is walking up a rough earth track, strewn with rocks, in windy weather. Her umbrella has been blown out by a fierce gust.

My final painting of umbrellas used to shelter from rain is one of Nikolai Astrup’s early works: Farmstead in Jølster (1902). Two women, sheltering from the rain under black umbrellas, are walking up a muddy path which threads its way through the wooden farm buildings, guiding a young girl with them.

In the next article, I look at a selection of umbrellas used not to provide shelter from rain, but to provide shade when outdoors in fine weather.