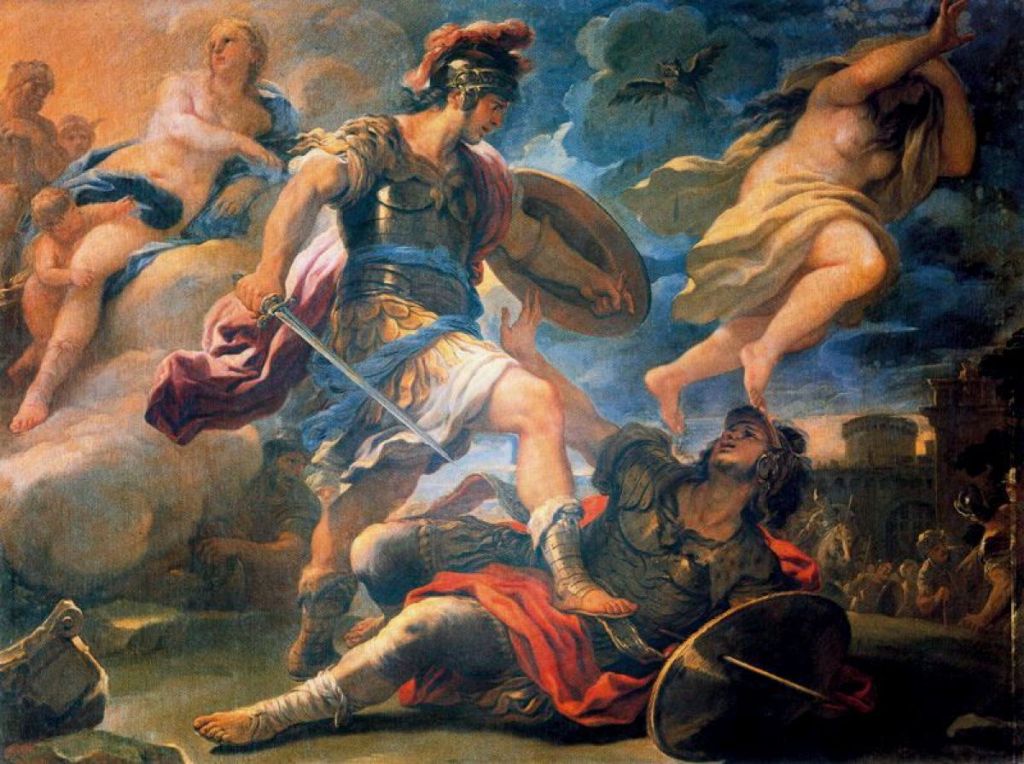 In Ovid’s Metamorphoses, Achaemenides and Macareus have been telling stories from the Odyssey. With those complete, Aeneas (hero of Virgil’s Aeneid) moves on to found Alba, the precursor to Rome itself.

When Macareus had completed his narrative, Aeneas’ nurse was buried there in a marble sepulchre. Aeneas and his crew then set sail on the final leg of their journey from Troy to Latium.

Once they had arrived, Aeneas and his former Trojans had to fight Turnus, king of the Rutuli, for Latinus’ throne and the hand of Lavinia in marriage. This proved a long and bitter struggle, in which Aeneas was aided by others. Among those who refused to assist him was Diomede, in Apulia.

In defending his refusal to aid Aeneas, Diomede told the story of his return from the Trojan War, which had proved a desparate journey. His colleague Acmon had rashly speculated what more Venus could have done to harm them, and taunted her:
With language of this kind Pleuronian Acmon,
Provoking Venus further than before,
revived her former anger. His fierce words
were then approved of by a few, while we
the greater number of his real friends,
rebuked the words of Acmon: and while he
prepared to answer us, his voice, and even
the passage of his voice, were both at once
diminished, his hair changed to feathers, while
his neck took a new form. His breast and back
covered themselves with down, and both his arms
grew longer feathers, and his elbows curved
into light wings, much of each foot was changed
to long toes, and his mouth grew still and hard
with pointed horn.
Amazed at his swift change
were Lycus, Abas, Nycteus and Rhexenor.
And, while they stared, they took his feathered shape.
The larger portion of my company
flew from their boat, resounding all around
our oars with flapping of new-fashioned wings.
If you should ask the form of these strange birds
they were like snowy swans, though not the same.

Acmon and his friends were thus transformed into white seabirds. Aeneas’ envoy to Diomede, Venulus, also saw a grotto where a shepherd had offended Pan, and been turned into an oleaster tree.

During the war with Turnus, enemy forces had been sent to set alight to Aeneas’ fleet of ships. Built with pinewood frames, they burned well. But Juno intervened:
When the holy mother of the gods, recalling
how those same pines were felled on Ida’s crest,
filled the wind with a sound of cymbals clashed
and trill of boxwood flutes. Borne through light air
by her famed lion yoke, she came and said,
“In vain you cast the fire with impious hand,
Turnus, for I will save this burning fleet.
I will not let the greedy flame consume
trees that were part and members of my grove.”
It thundered while she spoke, and heavy clouds,
following the thunder, brought a storm
of bounding hail. The Astraean brothers filled
both air and swollen waters with their rage
and rushed to battle. With the aid of one
of them the kindly mother broke the ropes
which held the Phrygian ships, and, drawing all
prow foremost, plunged them underneath the wave.
Softening quickly in the waters quiet depth,
their wood was changed to flesh, the curving prows
were metamorphosed into human heads,
blades of the oars made feet, the looms were changed
to swimming legs, the sides turned human flanks,
each keel below the middle of a ship
transformed became a spine, the cordage changed
to soft hair, and the sail yards changed to arms.
The azure color of the ships remained.
As sea-nymphs in the water they began
to agitate with virgin sports the waves,
which they had always dreaded. Natives of
the rugged mountains they are now so changed,
they swim and dwell in the soft flowing sea,
with every influence of birth forgot.

That was a reverse of the normal type of transformation, with inanimate ships being changed to sea-nymphs.

When Turnus was killed by Aeneas, so the city of Ardea fell, and from its ashes and ruins arose a bird, the heron.

With the end of Aeneas’ life in sight, his mother Venus campaigned among the gods and goddesses for him to be transformed into a god when he died:
The gods assented, and the queen of Jove
nodded consent with calm, approving face.
The father said, “You well deserve the gift,
both you who ask it, and the one for whom
you ask it: what you most desire is yours,
my daughter.” He decreed, and she rejoiced
and thanked her parent. Borne by harnessed doves
over and through the light air, she arrived
safe on Laurentine shores: Numicius there
winds through his tall reeds to the neighboring sea
the waters of his stream: and there she willed
Numicius should wash perfectly away
from her Aeneas every part that might
be subject unto death; and bear it far
with quiet current into Neptune’s realm.
The horned Numicius satisfied the will
of Venus; and with flowing waters washed
from her Aeneas every mortal part,
and sprinkled him, so that the essential part
of immortality remained alone,
and she anointed him, thus purified,
with heavenly essence, and she touched his face
with sweetest nectar and ambrosia mixt,
thereby transforming him into a god.
The throng of the Quirini later named
the new god Indiges, and honored him.

Ovid then lists the successor rulers of Latium and Alba, which had been founded by Aeneas, up to the reign of King Proca, in which his next story is set.

Whether viewed from the final books of Virgil’s Aeneid or Ovid’s retelling at the end of his Metamorphoses, the adventures of Aeneas in Italy have been painted very seldom indeed, although his apotheosis to a god has been more popular.

Antonio Tempesta’s etching of Acmon and his Friends Changed into Birds by Venus from about 1600 is the only pictorial representation which I have been able to find of that story told by Diomede, and for its period it tells it well.

The single illustration that I have been able to find of the transformation of the burning Trojan ships into nymphs comes from one of the most precious documents featured in this series: the Vergilius Vaticanus manuscript of Virgil’s works dating back to about 400 CE. Three ships are seen already transformed into the head, arm, and body of nymphs at the far right, although there is no sign of any fire or hailstorm. The left and centre show Aeneas fighting Turnus.

The Vergilius Vaticanus is very special, as one of the oldest surviving sources for the text of the Aeneid, and one of only three ancient illustrated manuscripts containing classical literary works. At one time, it belonged to Pietro Bembo, an Italian scholar who is commemorated in the font name.

Luca Giordano’s Aeneas and Turnus from the late 1600s is one of the few paintings showing the battle between Aeneas and Turnus. The Trojan hero here has Turnus on the ground, under his right foot. At the lower left is one of Aeneas’ ships, which has not been transformed into a nymph. Venus, Aeneas’ mother, and Cupid, his half-brother, are at the upper left, and the goddess at the upper right is either Minerva (with her owl), or Juno – as losers in the Judgement of Paris, both bore a grudge against the Trojans.

Of the more numerous paintings of the apotheosis of Aeneas, I have chosen two.

Peter Candid’s Aeneas Taken to Olympus by Venus from around 1600 shows Venus at the right, in her chariot with Cupid, anointing Aeneas, on the left, with nectar and ambrosia. Above them is the pantheon, arrayed in an imposing semicircle, and above them Jupiter himself, clutching his thunderbolts and ready to receive the new god.

Tiepolo’s sketch for a fresco ceiling in the Royal Palace in Madrid, The Apotheosis of Aeneas from about 1765, is another impressive account. The artist made this a little more elaborate by combining the apotheosis with the presentation of arms to Aeneas by his mother Venus.

Aeneas is to the left of centre, dressed in prominent and earthly red. Above and to the right of him is his mother, Venus, dressed in white, ready to present the arms which have been forged for him by Vulcan, her partner, who is shown below supervising their fabrication. Aeneas’ destination is the Temple of Immortality, glimpsed above and to the left of him, through a break in the divine clouds.

With Aeneas turned into the Roman god Indiges, Ovid moves on with the story of the foundation of the city of Rome.