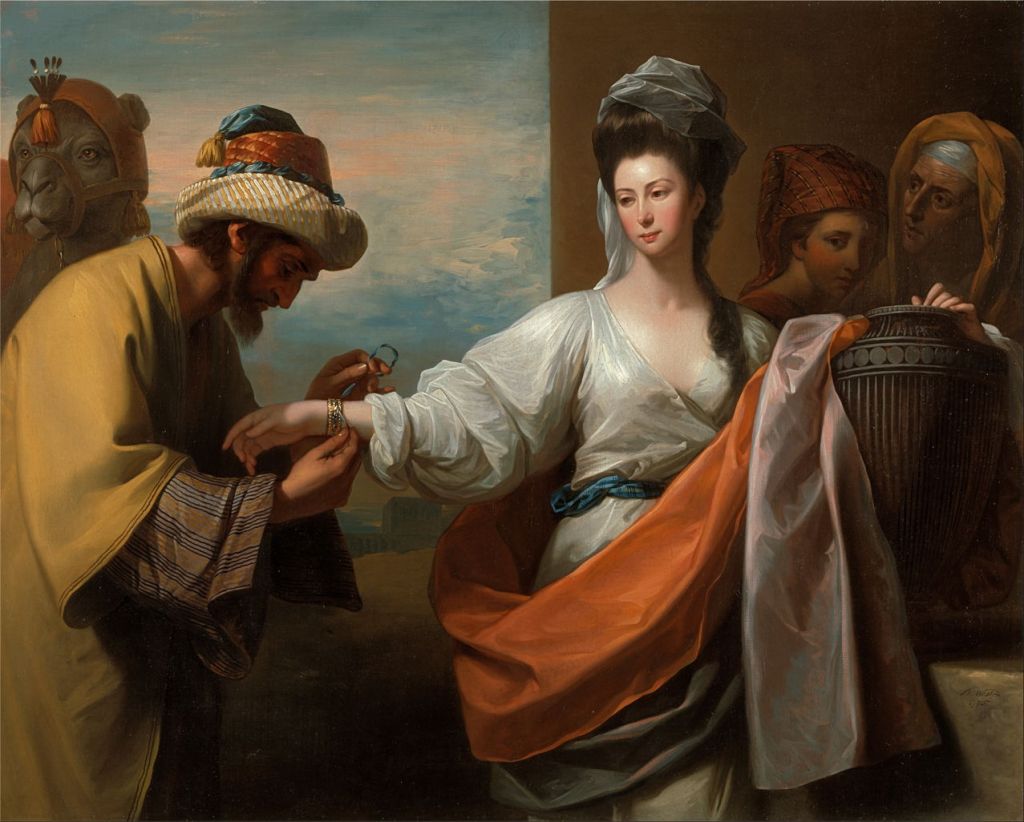 After West’s success with his ‘modern history’ painting of The Death of General Wolfe (1770), by was commissioned by King George III to provide him with a copy – his third royal commission, following The Departure of Regulus in 1769, and The Oath of Hannibal the following year. In 1772, West was appointed historical painter to King George, which brought him in a handsome annual income.

This shows the Quaker founder of the state of Pennsylvania purchasing land for his colony from the Lenape people, with a treaty of peace between the colonists and the ‘Indians’, an event which took place ninety years earlier in 1682. It was every bit as popular and successful as The Death of General Wolfe, being reproduced in prints and on all manner of other surfaces, even bedspreads. Like The Death of General Wolfe, it was also savaged for its historical inaccuracies, to say nothing of its role in misrepresenting the reality of westward expansion in North America.

As a narrative painting, it has several shortcomings too. Its central group tries to tell too many little stories, and has no dominant figures, leaving the viewer wondering where to look for its narrative. One good measure is to count the number of different places to which its figures are directing their gaze: almost everyone is looking at a different point. If its own characters are unsure of what they should be looking at, then how can the viewer be expected to know either?

Another of West’s narrative paintings that year is based on a story from Canto 9 of Book 1 of Edmund Spenser’s epic poem The Faerie Queene: The Cave of Despair (1772). The Knight of Holiness, bearing a red cross, vows to battle the creature Despair. When he finds the creature’s cave, it is littered with corpses, and Despair has only just finished killing the latest. Despair then tries to convince the knight that he should kill himself – an action which Una prevents him from doing.

Una is at the far left, preventing the knight from stabbing himself with his own dagger. The figure of Despair sits looking frail rather than fearsome, with his latest victim lying dead at the lower right corner.

Erasistratus the Physician Discovers the Love of Antiochus for Stratonice (1772) may appear to depict an obscure and uninteresting story, but it was undergoing a surge in interest at the time. Jacques-Louis David painted his Antiochus and Stratonice in 1774, a work which won him the Prix de Rome, and JAD Ingres followed in 1840. In this painting from classical history, West was thus being innovative.

The story of Antiochus and Stratonice is taken from Plutarch’s Lives. Antiochus was the son of the leader of the Seleucid empire, Seleucus I Nicator, who had the misfortune to fall in love with his father’s new wife Stratonice, thus his stepmother. Fearing the consequences if this should be discovered, he kept it a secret, but fell ill because of his love, and his condition became so severe as to threaten his life.

When the physician Erasistratus was summoned to discover the cause of Antiochus’ illness, he was examining his patient as Stratonice walked into the room. Noting the dramatic effects of her presence on Antiochus’ pulse, he pronounced this love as being the cause of the illness.

West’s version would not have succeeded against David’s in the contest for the Prix de Rome. It shows Stratonice at the left, with her attendants, Erasistratus apparently feeling Antiochus’ pulse at the wrist and over his heart, and Seleucus, with his crown, at the right. All appear detached to the point of diffidence, and there is no sign of any response from Seleucus. Emotions run high in David’s painting, and in Ingres’ Seleucus is shown collapsed in shock at the diagnosis.

I show West’s non-narrative painting of The Artist and His Family here as it was made at about this time, and provides valuable insight into his peculiar circumstances. It shows, from the left, the Wests’ older son, Benjamin West’s wife Betsy, cradling their newborn second son in her lap, Benjamin West’s brother Thomas, and father John (who had been born in England), and standing in his lavender gown, holding palette and maulstick, is Benjamin West himself.

Often compared with a traditional Nativity scene, it was described at the time as a “neat little scene of domestic happiness”. But looking at the directions of gaze, and the extraordinary detachment of Thomas and John West, who are staring into the distance, I think that domestic happiness is very far from the truth.

West also painted a steady series of religious works, including Isaac’s Servant Tying the Bracelet on Rebecca’s Arm, in 1775. This shows a moment from the story of Eliezer of Damascus, a servant to Abraham and his son Isaac, who identified Rebecca as the bride for Isaac. Eliezer was sent with ten camels on a mission to find the bride as the woman who offered to draw water for him and for his camels to drink. Having found her at a well, Eliezer gave her a golden nose ring and two golden bracelets, tokens which she showed her family, and which marked her as Isaac’s intended wife.

This has proved quite a popular Old Testament story among artists, and West’s version stands as one of its better depictions, even down to the sour-faced camel at the upper left.

For his painting of Helen Brought to Paris (1776), West had a wide choice of textual references, most of which gave the story as one of abduction and even rape rather than as shown here. West seems to have followed the Cypria or possibly a fragment of Sappho’s verse, in which Aphrodite brings Helen to Paris.

He shows Cupid and Aphrodite leading Helen towards a very young and remarkably passive Paris.

At first sight, West’s painting of Fidelia and Speranza (Faith and Hope) (1776) might appear to show two personifications in a little allegorical setting. However, that would not account for the knight in armour seen in the distance, at the lower left. That confirms that these are intended to be two of the three daughters of Dame Caelia from Edmund Spenser’s The Faerie Queene, in Canto 10 of Book 1. I’m not sure why the third daughter, Charissa, is absent.

With his last ‘modern history’ painting six years earlier, by 1778 West was surely ready for another, so painted two.

The Battle of La Hogue is a large canvas which West completed in 1778, and retouched in 1806. It shows a relatively minor naval action which took place between 21 and 24 May 1692 off the French port of Saint-Vaast-la-Hougue, in which a pursuing British fleet destroyed twelve French warships which had been beached after the Battle of Barfleur.

Unusual because the French ships were essentially immobilised, and were attacked by fireships and small ships’ boats, this action did ensure that the French were unable to mount an invasion that year.

West shows several of the small boats, packed with British and French forces. In the right foreground, vicious close-quarter combat is in progress, and in the left distance a ship of the line is well alight. This painting conveys very forcefully the confusion of combat, but in doing so leaves the viewer confused as to the outcome or purpose of the action, or indeed the painting.

Of all West’s ‘modern history’ paintings, The Death of Chatham must be the most contemporaneous, as he painted it immediately after the sudden collapse and later death of William Pitt the Elder, the First Earl of Chatham, in the House of Lords on 7 April 1778.

Chatham had been the political architect of the British success in the Seven Years’ War between 1757-63, which had won the British power in North America. He was a strong opponent of American independence, and when the Duke of Richmond proposed the withdrawal of British troops from America, Chatham made his way to the House of Lords to answer Richmond’s motion. Chatham appeared feeble at the start of his speech, and when he finished he collapsed, as shown in West’s painting. He did not die then, but just over a month later.

Unfortunately, a more dramatic version of this motif was painted in 1779-80 by West’s former protegé John Singleton Copley, and immediately became the definitive painting of the event. Indeed, some consider that Copley’s The Death of the Earl of Chatham made Copley an equal partner with West in creating the new ‘modern history’ painting.