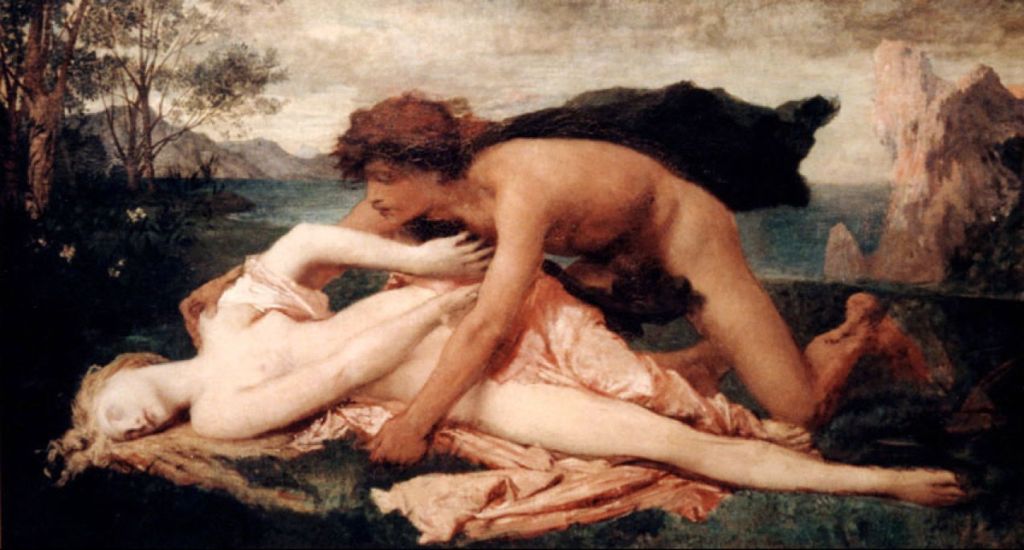 After Ceyx and Halcyone have been changed into kingfishers, Ovid has one last story of transformation into a bird, with which to conclude Book 11 of his Metamorphoses: that of Aesacus, who unwittingly led to the death of Hesperia.

A man watching kingfishers fly together tells this story of one of the sons of Priam, king of Troy, thus a brother to Hector. While Hector’s mother was Hecuba, this brother, Aesacus, was secretly born of Alexiroe. Unlike his famous brother, Aesacus shunned Troy and populous places. He often pursued Hesperia, the daughter of the river-god Cebren, but one day as she was fleeing from him, she was bitten on her foot by a venomous snake.

She died immediately, and Aesacus held her limp body in his arms, blaming himself for being the cause of her death. He went straight to the top of a sea cliff, and flung himself from it. Tethys took care of him as he entered the water, and transformed him into a diver (seabird):
He said those words and leaped on a high rock,
which years of sounding waves had undermined,
and hurled himself into the sea below.
Tethys was moved with pity for his fall,
received him softly, and then covered him
with feathers, as he swam among the waves.
The death he sought for was not granted him.
At this the lover was wroth. Against his will,
he was obliged to live in his distress,
with opposition to his spirit that desired
departure from the wretched pain of life.
As he assumed upon his shoulders wings
newformed, he flew aloft and from that height
again he plunged his body in the waves
his feathers broke all danger of that fall —
and this new bird, Aesacus, plunged headlong
into the deep, and tried incessantly
that method of destruction. His great love
unsatisfied, made his sad body lean,
till even the spaces fixed between the joints
of his legs have grown long; his neck is long;
so that his head is far away from his
lean body. Still he hunts the sea
and takes his name from diving in the waves.

This short story has not proved popular, and like those immediately before it, has hardly ever been painted.

It does have the benefit of a rather good engraving by Virgil Solis of Aesacus and Hesperia for sixteenth century editions of Ovid’s Metamorphoses. In the foreground, Aesacus has just caught up with the dead body of Hesperia, the offending snake still by her foot. Then behind them is the sight of Aesacus throwing himself from the top of a cliff, with Tethys ready to catch him below.

The great nineteenth century narrative painter Jules-Élie Delaunay, a friend of Gustave Moreau’s, is probably the only painter to have depicted this story in a significant work: The Death of the Nymph Hesperia (1859). I apologise for the poor image quality, which does not show sufficient detail to determine whether the snake is still present.

Hesperia lies, cold, white and dead, as Aesacus blames himself for the tragedy. At the top right corner are the overhanging cliffs from which Aesacus will shortly hurl himself, but there is, of course, no multiplex narrative here.

There is another painting which I think we should bear in mind: Ovid’s account is unique, and stresses that Hesperia is the daughter of a river-god, and not one of the Hesperides. Even so, I believe that there is some overlap (conscious or otherwise) with those daughters of Hesperus, the Evening Star, and their garden. For it was their garden which provided the golden apple of discord to the feast of the gods at the wedding of Peleus and Thetis, and thus set in train the events leading to the fall of Troy.

JMW Turner’s The Goddess of Discord Choosing the Apple of Contention in the Garden of the Hesperides (1806) shows Eris, goddess of discord, as an older woman, dressed in a red skirt, in the centre foreground. She is choosing between two golden apples which have just been picked from the surrounding garden by the Hesperides shown.

It may be that Ovid is not only telling this story here because Aesacus was Hector’s half-brother, but because of this association between Hesperia and the golden apple of discord.

This brings us to the end of Book 11. The next book makes better progress in the story of the Trojan Wars, for which there should be no shortage of great paintings.