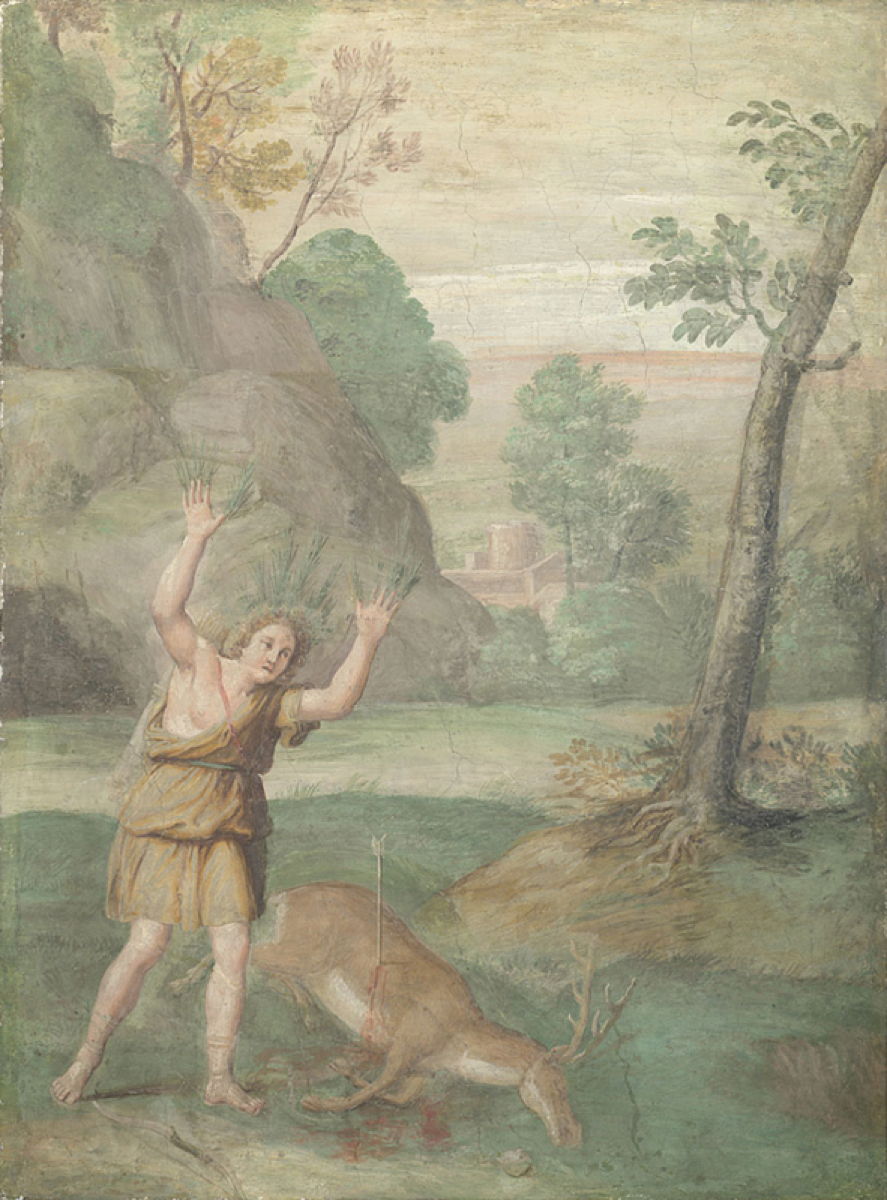 Domenichino (1581-1641) and assistants, The Transformation of Cyparissus (1616-18), fresco transferred from Villa Aldobrandini, Frascati, to canvas and mounted on board, 120 x 88.3 cm, The National Gallery (Bought, 1958), London. Courtesy of and © The National Gallery, London.

Book 10 of Ovid’s Metamorphoses follows the tragedy of Orpheus and Eurydice with two brief stories of people transformed into trees. The first is only mentioned in passing, as a link to the main story of Cyparissus.

Ovid leads into these two myths of transformation into trees by listing the trees which gave Orpheus shade as he sung with his lyre, mourning for his dead bride. There is a full arboretum:

Ovid adds two trees which are the result of transformations. The Italian pine, he says, was once Attis:
the bare-trunk pine of tufted foliage,
bristled upon the top, a pleasant sight
delightful to the Mother of the Gods;
since Attis dear to Cybele, exchanged
his human form which hardened in that tree.

But his main story is that of Cyparissus, a youth who had been the love of Apollo. A majestic giant stag had become quite tame in that area, and was a favourite of Cyparissus, who used to lead the stag to pasture, and ride it around on occasion.

In the middle of a hot summer’s day, when the stag was asleep, Cyparissus accidentally killed it with his javelin. The youth was heartbroken:
What did not Phoebus say to comfort him?
He cautioned him to hold his grief in check,
consistent with the cause. But still the lad
lamented, and with groans implored the Gods
that he might mourn forever. His life force
exhausted by long weeping, now his limbs
began to take a green tint, and his hair,
which overhung his snow-white brow, turned up
into a bristling crest; and he became
a stiff tree with a slender top and pointed
up to the starry heavens. And the God,
groaning with sorrow, said; “You shall be mourned
sincerely by me, surely as you mourn
for others, and forever you shall stand
in grief, where others grieve.”

So Cyparissus was transformed into a cypress tree, which has since grown in and by cemeteries, and other places of grief.

Although this is a very brief and simple tale, it has attracted the attention of several painters.

Surprisingly, the fairly overtly pederastic relationship between Apollo and Cyparissus has been shown in several paintings, of which Claude-Marie Dubufe’s Apollo and Cyparissus (1821) is perhaps an early example. It is hard to know how much of Ovid’s story the artist is referring to here: Cyparissus rests against the stag, but there is no sign of its wounding or death, even though the god is clearly comforting the youth.

There is no room for ambiguity in any respect of Alexander Andreyevich Ivanov’s Apollo, Hyacinthus and Cyparissus Making Music and Singing (1834). While Hyacinthus plays the pipes, Apollo embraces Cyparissus. The stag lies sleeping on a rock at the right.

By far the best narrative depiction of this myth is that painted by Domenichino and his assistants in the Villa Aldobrandini, Frascati, as part of the Stanza di Apollo in its garden pavilion. He has wisely kept the god out of this section of the fresco, and shows the stag dead on the ground, although killed by an arrow rather than a javelin. Next to the animal’s body, a distraught Cyparissus is already changing into a cypress tree.

While considering the cypress as a companion of grief, I cannot ignore the greatest paintings of cypresses of all time, particularly in their context of Vincent van Gogh’s imminent fate.

He may never have known of this myth, but this painting is surely about the grief of Cyparissus, and of Vincent van Gogh himself.