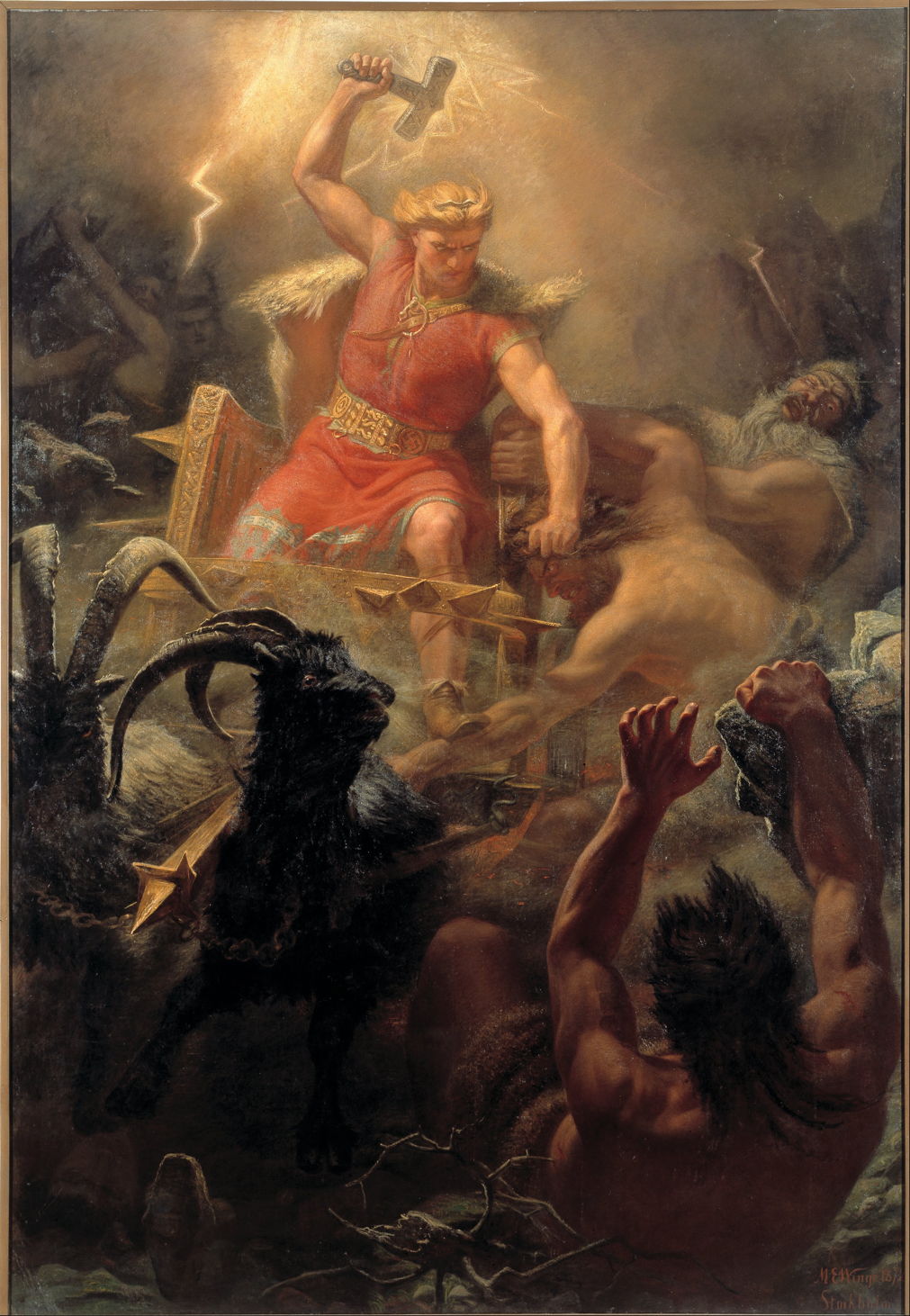 Northern and Southern Europe are almost different continents. Nowhere is this more apparent than in the spread of Christianity and its impact on art.

In the Mediterranean countries, Christians were oppressed by the Roman state, and killed if they did not revert to support its state polytheism. Yet when the Roman Empire adopted Christianity, it was assimilated, and did not fully replace pre-Christian religions. When the Renaissance came, artists continued to tell those pre-Christian myths, and in some cases fused them with Christian beliefs: Botticelli’s Primavera (c 1482) is an excellent example, as is the continuing European tradition of painting ancient Greek and Roman myths.

In Northern Europe, centred on the North Sea and the Baltic, early Viking and other raiders did massacre Christian monks, but largely in pursuit of riches rather than because of their beliefs. When leaders and monarchs converted to Christianity, it was not unusual for them to threaten the uncoverted with death if they failed to become Christian!

Christian beliefs came to completely suppress earlier religions and mythologies, and the Northern Renaissance shows little or no evidence of those old myths. As a result, Norse and other myths vanished from art until they were ‘rediscovered’ in the late eighteenth century. This article and the next look at some of the paintings which have since shown pre-Christian Norse deities and myths.

I avoid the innumerable illustrations which have been made to accompany texts of myths, such as the sagas. Although many have great artistic merit, and this is not intended to make any comment on that merit, there are just too many to even dip into.

Norse mythology features creation myths, among which is the story of Auðumbla, the primaeval cow, shown in Nicolai Abildgaard’s painting of Auðumbla from 1790. The giant Ymir is seen suckling at the four udders of Auðumbla, as the cow is licking the figure of Búri out of the ice. The latter task took Auðumbla three days to accomplish, following which Búri was the first of the gods, father of Borr, and grandfather of Odin, Vili, and Ve.

This god is perhaps the best-known of the entire Norse pantheon, and spread throughout Old English and Germanic mythologies too, living on in the day of the week Thursday. He famously wields his mighty hammer Mjölnir, with which he forges thunderbolts, and is associated with thunderstorms, storms more generally, oak trees, the protection of mankind, and fertility.

He is the husband of the goddess Sif, but like the Roman Jupiter has several extramarital relationships resulting in children.

Henry Fuseli’s painting of The Battle Between Thor and the Snake of Midgard (1788) shows one of Thor’s many exploits: his battle with the monstrous serpent Jörmungandr. This was a sea serpent born of the giant Angrboða and Loki.

This celebrated battle occurred when Thor went fishing with the giant Hymir. Thor baited a strong line with an ox head, which the serpent bit. When Thor pulled the serpent from the water, Hymir shied away, as shown here. When Thor reached for his hammer to kill Jörmungandr, Hymir cut the line, and the serpent escaped, only to face a further battle with Thor at the end of the world, Ragnarök.

Mårten Eskil Winge’s painting of Thor’s Fight with the Giants (1872) shows a less well-known battle, but provides greater detail, such as the two goats which draw Thor’s chariot. In any other circumstances those goats might have looked rather feeble, but Winge makes them as ferocious as Thor himself.

Odin (or Woden) is also well-known, and prominent in the Norse pantheon. Husband of the goddess Frigg, he has many sons, including Thor himself. He is associated with death, and is the overseer of Valhalla, where heroes go after death. Conversely, he is also associated with healing, knowledge, and sorcery. He lives on in the day of the week Wednesday, for Woden’s day.

Hans Thoma’s painting of The Trek of the Gods to Valhalla (1880) shows the group of gods known as the Æsir riding across the bridge Bifröst, which is formed from a burning rainbow and reaches between Midgard (the realm of humans) and Asgard (the realm of the gods). The Æsir traditionally include Odin, Frigg, Thor, Baldr, and Týr. Recognisable on the bridge are Odin, holding his staff, with Frigg, and Thor with his hammer. At the left is probably Iðunn, holding an apple of her youth aloft.

This is another event foretold as part of the process of Ragnarök.

Valhalla is also home to the Valkyries, fearsome women whose role is to select those who die in battle from those who survive. Of those who die, the Valkries bring half to Odin’s Valhalla, where they become einherjar, preparing for the events of Ragnarök. The other half who die are taken to Freyja’s Fólkvangr, a field of afterlife.

Peter Nicolai Arbo painted at least two different versions of a Valkyrie, that above from 1864, and that below from 1869.

Freyja is the goddess of love, sex, beauty, and war, and custodian of the field of the afterlife, Fólkvangr, where she is seen in her hall, Sessrúmnir. She is the wife of the often-absent Óðr, by whom she has two daughters. Her chariot is drawn by two cats, often shown as black.

Anders Zorn’s veru unconventional painting of Freya was made in 1901 as a gift for Samuel Roosevelt, cousin of the US President. Her waist-length hair sweeps down over her right arm, as she lounges in her throne in Sessrúmnir. She holds a chalice in her left hand, and a black cat is by her feet. Roosevelt was a keen amateur artist, and Zorn painted this work in his studio in New York when he was visiting.

Loki is a shape-shifting god known for his mischievous or even malicious tricks and pranks which he plays on other deities. He is the husband of Sigyn, but is also the father of the sea serpent Jörmungandr, and (when he had assumed the form of a mare) the mother of Odin’s eight-legged horse Sleipnir.

Christoffer Wilhelm Eckersberg’s painting of Loki and Sigyn from 1810 shows Loki’s fate. He engineered the death of Baldr, for which he was bound by Váli using the entrails of one of his sons. A serpent was then placed above him, to drip venom which Sigyn collects in a bowl. When she has to empty that bowl, venom drips onto Loki, causing him excruciating pain, which triggers earthquakes.

Baldr is a son of Odin, and brother to Thor and Váli.

Baldr became depressed by dreams of his own death. His mother Frigg therefore made everything on earth vow that it would not hurt Baldr, but the mistletoe refused. Loki made himself a magical spear from the mistletoe, and took it to a place where the other gods were amusing themselves by throwing objects at Baldr, as their missiles simply bounced off without harming him – a consequence of the vows.

Loki gave his mistletoe spear to Baldr’s brother Höðr, who was blind. When Höðr threw the spear at Baldr, it killed him. That is the scene which Christoffer Wilhelm Eckersberg so carefully depicts in his painting of The Death of Baldr from 1817. Baldr lies dead in the foreground, with Höðr holding his arms out at the left. Behind him is Loki, barely concealing his mirth. Odin sits in the throne, with Thor to the right.

Behind is the immense tree Yggdrasil, which connects the nine worlds, and at its foot are the three Norns, fates who I will discuss in the next article.