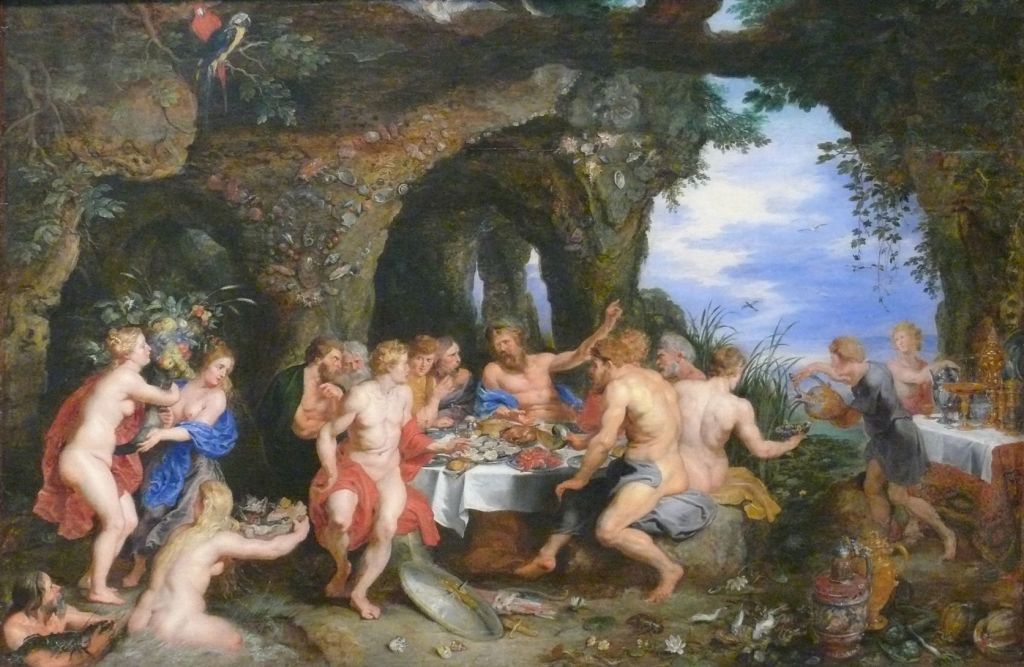 At the end of the Calydonian boar hunt, what should have been an occasion for rejoicing was marred when the two sons of Thestius objected to Meleager giving Atalanta the prize, and the enraged Meleager ran them both through with his sword. This leads Ovid on to detail the death of Meleager, following which he embarks on a series of stories told at a feast hosted by Achelous, a river god.

When Meleager’s mother Althaea first hears of his success in killing the boar, she gives thanks to the gods. She then learns that he has killed her two brothers, and is plunged into profound grief, and anger at her son.

She determines to avenge the deaths of her brothers, and recalls that when Meleager was born, the Fates gave her a burning log which they said would determine the life of her child: so long as the log remained, and was not consumed by fire, he would live. As soon as the Fates had gone, Althaea took the log from the fire, extinguished its flame, and kept it in a safe place, so preserving her son’s life.

She now decides to throw the log of life onto a fire of hatred. Four times she tries to throw the log onto the flames and cannot bring herself to do it. She lets loose a long soliloquy (one of Ovid’s finest) in which she frames her dilemma, then finally acts:
She spoke and as she turned her face away,
she threw the fatal billet on the fire,
and as the flames devoured it, a strange groan
was heard to issue from the burning wood
but Meleager at a distance knows
of naught to wreck his hour of victory,
until he feels the flame of burning wood
scorching with secret fire his forfeit life.

Meleager does not know what is happening, only that he has a deep internal burning pain. As he groans, he calls for his mother, brothers, and sisters in his suffering, and dies with his sisters at his side:
And when the flames had burnt his shrinking form
they strained his gathered ashes to their breasts,
and prostrate on the tomb kissed his dear name,
cut only in the stone, — and bathed it with their tears
Latona’s daughter, glutted with the woes
inflicted on Parthaon’s house, now gave
two of the weeping sisters wide-spread wings,
but Gorge and the spouse of Hercules
not so were changed. Latona stretched long wings
upon their arms, transformed their mouths to beaks,
and sent them winging through the lucent air.

Thus two of Meleager’s sisters were transformed into birds, most probably guinea hens.

Ovid then moves on to the next set of stories, which take place during Theseus’ journey home after the boar hunt. It has been raining very heavily and the rivers are swollen when he reaches the River Achelous, whose river god invites Theseus to pause in his home until his waters have fallen.

Theseus accepts this invitation, and is taken to a hut made of pumice and volcanic tufa, with a damp and mossy floor, and a ceiling decorated with conch and murex shells. There Achelous hosts a banquet, his guests being Theseus, Ixion’s son, Lelex, and others, who recline on couches as they feast.

Theseus looks out and sees an island which he does not recognise. Achelous informs him that it is actually five islands, the Echinades. They had been five nymphs, who had sacrificed ten bullocks to the gods, but forgot to invite Achelous. The river god raged in anger, and washed them out to sea, where they formed the islands that Theseus could see.

Achelous points out one island in the distance which is dear to him, and named Perimele: she had been a nymph beloved by Achelous, but had lost her virginity. Her father Hippodamas was so incensed that he threw her from a cliff. Achelous saved her, and called on Neptune to turn her into an island too:
“The Nymph, afraid, still struggled in the deep,
and as she swam I touched her throbbing breast;
and as I felt her bosom, trembling still,
I thought her soft flesh was becoming hard;
for even then, new earth enclosed her form;
and as I prayed to Neptune, earth encased
her floating limbs; — and on her changing form
the heavy soil of that fair island grew.”

After Achelous has told this story, Lelex starts telling the next, of Philemon and Baucis – one of Ovid’s most touching myths, which doesn’t appear in any other source.

The death of Meleager is another myth which has failed to become popular among painters, although there is a superb relief on a marble panel from a Roman sarcophagus from about 160 CE.

This relief shows the Death of Meleager using multiplex narrative. At the right, Meleager has killed one of the sons of Thestius, and is about to kill the other. In the centre, Meleager lies on a couch, in the throes of death, his sisters beside him. At the left, Meleager’s mother Althaea throws a log or brand onto the fire to bring about her son’s death.

By comparison, François Boucher’s The Death of Meleager from 1727 is a little formulaic. Meleager is ailing fast on the left, his family and friends around him. One sister at the right is apparently being fondled quite inappropriately by the man behind her. Although there is a figure in the centre background who might be Althaea, there is no clear visual reference to the burning log.

The feast of Achelous enjoyed a brief period of popularity during the early part of the seventeenth century, then vanished, it seems.

Hendrick de Clerck’s The Banquet of Achelous was probably the first of this group, painted in about 1610. The four men are feasting, sat around a table rather than reclining in Roman style. The rock pergola which surrounds them is suitably decorated with shells, and a bevy of bare-breasted young women serves seafood and fruit. In the distance, to the right, nymphs are cavorting in a bay, a delightful reference to Achelous’ story of the creation of the Echinades.

Jan Brueghel the Younger and Hendrick van Balen combined talents to paint The Feast of Achelous slightly later, in about 1610-20. It follows a similar composition to de Clerck’s painting, but reversed, with the distant nymphs on the left. (I apologise for the poor quality of this image.)

At about the same time, around 1615, Peter Paul Rubens collaborated with Jan Brueghel the Elder (father of Jan Brueghel the Younger) in The Feast of Achelous. There are now nine men around the table, and the distant nymphs are nowhere to be seen.

At some time during the first half of the seventeenth century, a painter from Rubens’ school made this rather less convincing and closer composition of The Banquet of Achelous. The stone hut has closed in on the group, and the distant landscape views are gone. The arrangement is reminiscent of the Last Supper or a New Testament wedding feast, with the figure of Theseus presiding – even down to a loaf of bread on the table, and wine being poured. There is precious little to link this painting with Ovid’s story of the Echinades.

Of the four, I like de Clerck’s the most. If it was the first, he set a standard which even the Brueghels, father and son, and Rubens found hard to match.