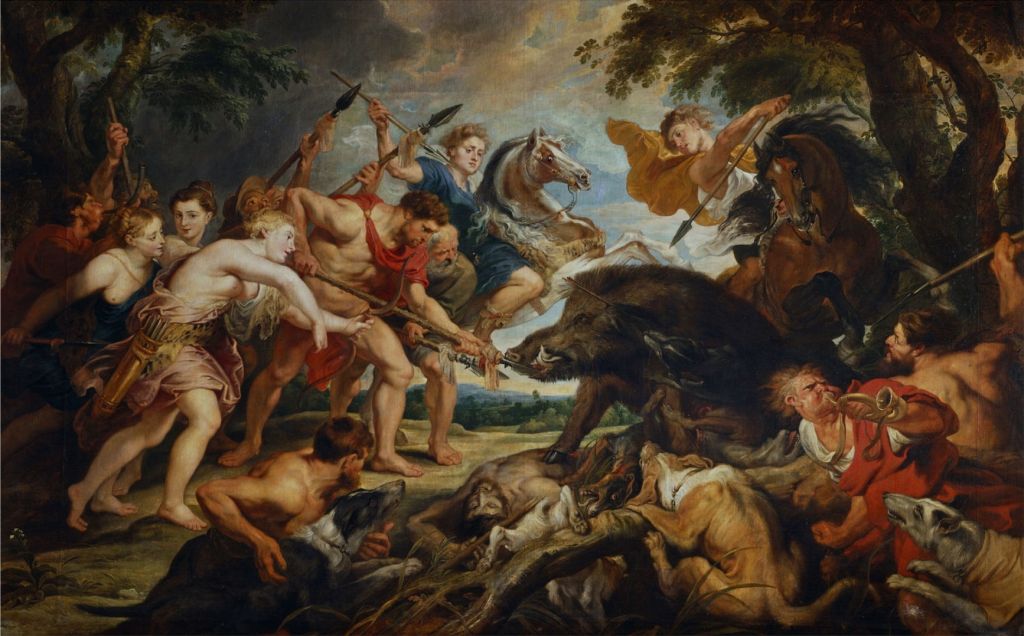 As Ovid approaches the midpoint of Book 8 of his Metamorphoses, hence the middle of its fifteen books, he has just left Daedalus burying his son Icarus after their fantastic flight went wrong. Ovid then tells one of the greatest stories, of the Calydonian Boar Hunt. What is unusual about this account is that he tells it with wry, even dry, humour, which lightens its otherwise gruesome events.

With the Minotaur dead, and Daedalus welcomed to Sicily, Theseus was sought to bring help to Calydon, which was being plagued by a monstrous wild boar, the vengeance of Diana. Calydon’s king Oeneus had paid oblations to most of the gods, but not to Diana, so incurring her wrath. Ovid provides a vivid description of the beast, as big as an ox, which Diana had unleashed on the city and its surrounding area, destroying crops and livestock.

A long list of heroes were summoned to hunt the boar: Theseus brought Pirithous, Telamon the son of King Aeacus came, Meleager too from Calydon itself, and more than a dozen others. With them came a young woman, Atalanta, who was plainly dressed, and for whom Meleager took an immediate fancy.

The hunters travelled to very dense ancient woodland to trap the boar, and laid their nets, released their dogs, and set about trying to track their quarry. They found the boar at the boggy bottom of a deep gully, where he rushed at them. Several threw their javelins, but none hit the beast, who charged at the men, goring several of them fatally before returning into a dense thicket.

Telamon tripped over in his pursuit, and as he was helped up, Atalanta loosed an arrow from her bow, which grazed the boar’s back and buried itself into the animal’s head just below the ear. Meleager praised her for this first success.

Ancaeus then boasted at how his weapons would surpass those of any woman, and raised himself to bring his double axe down on the boar. The beast gored him before he could strike; Ancaeus was disembowelled, and died. Pirithous threw his spear, which struck the branch of a chestnut tree, and Jason’s javelin impaled one of their dogs, pinning it to the ground.

At this stage, the efforts of the heroes had been at best amateur, if not farcical. It was now up to Meleager, whose second spearshot struck home, in the boar’s back, allowing him to finish the beast off quickly.

Meleager stood, one foot on the boar’s head, and gave his prize to Atalanta, to share the glory with him: he gave her the skin and head with its tusks as large as an elephant’s, which delighted Atalanta too.

But the two sons of Thestius objected to this, and took Meleager’s gift from her. This enraged Meleager, who promptly killed them both with his sword.

The Calydonian Boar Hunt is one of the great challenges of narrative painting, which was particularly popular with the seventeenth century masters, then almost vanished until the twentieth century. Some of its finest depictions, including that attributed to Veronese, are not currently available as usable images, but this selection should still tell Ovid’s story with brilliance.

The departure for the hunt is shown in The Hunt of Meleager and Atalanta (c 1634-39), which has been attributed to Nicolas Poussin, although that I think that is in great doubt. The procession of heroes, some on horseback, others on foot, makes its way out into the Calydonian countryside. Among them, it is easy to spot Atalanta, wearing a plain blue robe, holding her bow, and riding a white horse, towards the right.

There are also two statues behind: on the right is Pan with his pipes, and in the centre is Diana, the cause of this problem, with the skull of a boar shown on the tree behind.

Peter Paul Rubens and his workshop made several different versions. The first appears to have been The Calydonian Boar Hunt, in about 1611-12, which is now in the Getty. Here Meleager is just about to finish the wounded boar off. Atalanta’s arrow is visible by its left ear, and the body of Ancaeus lies just behind Meleager’s left foot.

The wall of horses behind the boar, and the crowd of hunters behind Meleager – including Atalanta, dressed again in blue – frame the combatants in the foreground, with some spears directing the gaze at a visual centre of the boar’s snout.

A few years later, in about 1618-19, Rubens reworked his composition in this marvellous study of Meleager and Atalanta and the Hunt of the Calydonian Boar. This shifts the visual centre close to the geometric centre, and brings the gaze in using a greater range of radials. It also gives Atalanta a more active part, as befits Ovid’s text.

The finished result is The Hunt of Meleager and Atalanta probably from around 1618-20, and now in Vienna. Meleager has aged slightly, and the boar rests its hoof on the body of Ancaeus. Radial lines of spears are augmented by a dog and some human figures, and the centre of the painting now includes a landscape, with bright sky used to emphasise the visual centre.

It also seems now to include not just Atalanta, shown at the right hand of Meleager, but two other women behind her, and possibly another in blue robes on a horse just above the middle of the painting.

With the boar now dead, Jacob Jordaens shows Meleager and Atalanta (1620-50) allocating the best part of the prize, the boar’s head. This is raised high above the couple at the right. On the left, though, the two sons of Thestius look incredulous, and are just about to refute Meleager, and take the head from Atalanta.

Rubens and his workshop’s Meleager Presents Atalanta with the Head of the Calydonian Boar (before 1640) prefers a more private award by Meleager. The couple are here alone, apart from an inevitable winged cupid, and a goddess (most probably Diana) watching from the heavens. Meleager stands on the forelegs of the dead boar, and his spear behind is still covered in its blood.

This splendid, if unintended, series of paintings tells Ovid’s story almost to its finish, perhaps wisely stopping short of Meleager’s extremely vindictive murder of the sons of Thestius – an act which is the basis for the next myth in the Metamorphoses.