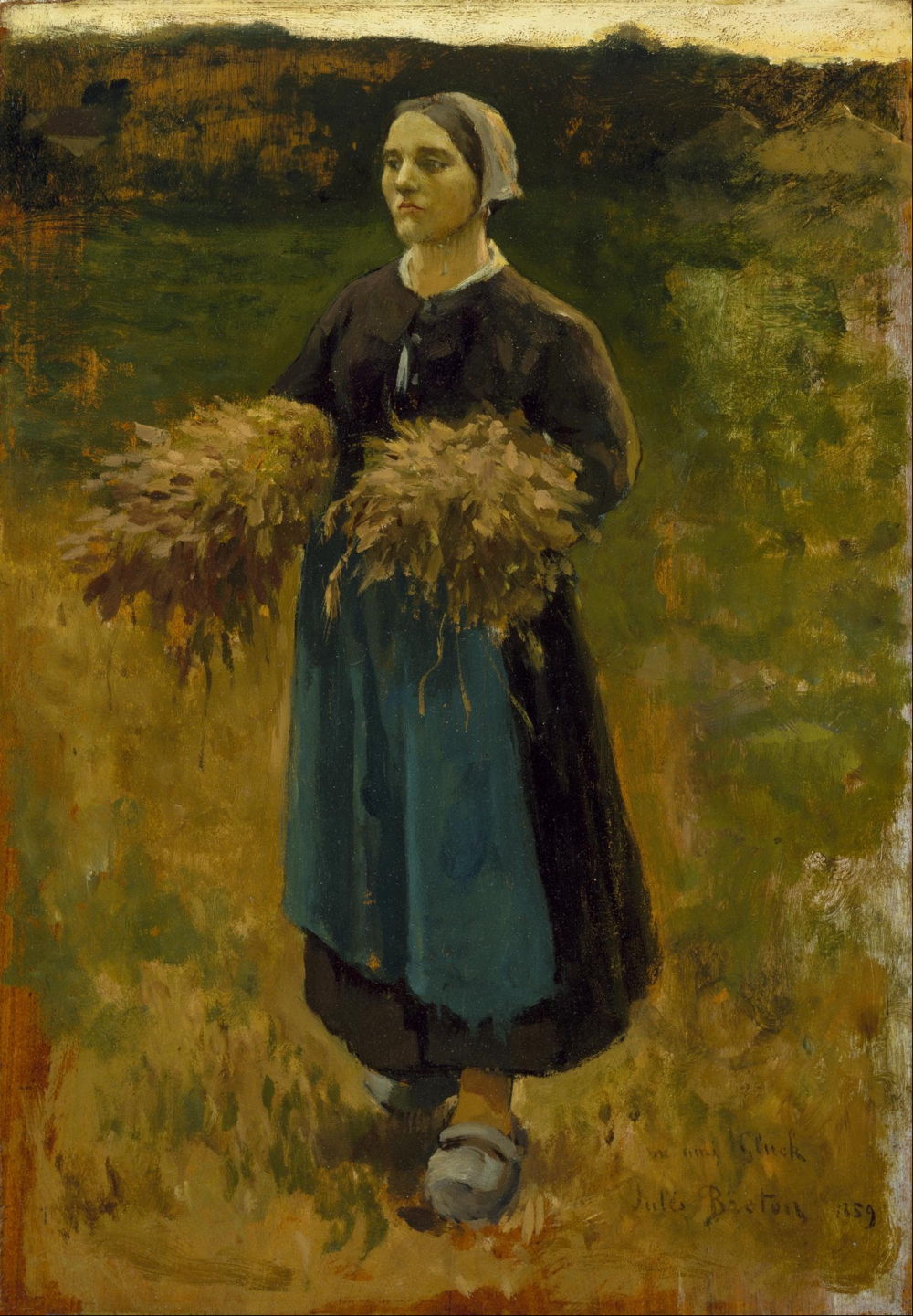 There were two major French artists who specialised in painting ordinary people in the countryside in the middle of the nineteenth century: Jean-François Millet (1814-1875) and Jules Breton (1827–1906). Recognised as one of the founders of the Barbizon School, I will return to look at Millet’s life and work another time; Breton remained an independent who today might be considered as a ‘social realist’ more akin to Jules Bastien-Lepage. This short series of articles looks at the life and work of Jules Breton.

If you have ever visited the Musée d’Orsay in Paris, you will no doubt have seen at least one of Breton’s most famous paintings, Calling in the Gleaners (1859), which is one of its great treasures. Thankfully, others are in many of the major galleries around the world, so you should not have far to travel to see them in the flesh.

Born Jules Adolphe Aimé Louis Breton on May Day 1827, Breton was brought up in the village of Courrières, a coal mining and farming community in the far north-east of France near the border with Belgium, which was later to be in the thick of some of the major battlefields of the First World War.

Breton’s father was the land agent, bailiff and tax collector for the local landowner and mayor of Courrières, so he got to know the land and its people very well. His artistic talents were recognised when he was in his early teens, and his family were persuaded to let him study art. In 1843, he went to live in his teacher’s house in Ghent, where he attended the Académie Royale des Beaux-Arts. In 1847, he moved to Paris, where he studied in the studio of Martin-Michel Drölling, and attended classes given by Ingres and Horace Vernet at the École des Beaux-Arts.

Unsurprisingly, with those artists as teachers, his early paintings were mostly of history, and in 1849 his first painting, titled Misery and Despair, was shown at the Salon in Paris. Sadly it has since disappeared, and is presumed to have been destroyed, together with Hunger, which was exhibited at the Salon of 1851.

Breton’s earliest surviving painting dates back to 1847, shortly before his father died and the family’s finances collapsed, which may have inspired the paintings accepted for the Salon. By 1852, Breton seems to have been devoting his time more to landscape painting.

The Storm (c 1852-53) shows his work at this time was detailed, realist, and – in this case, at least – had a wide tonal range. Although very competent, it was not particularly distinctive or original.

The date of his Summer Landscape with Peasant Women and Cows is unknown, but this was surely from the earlier years in his career, and appears to have been inspired by the works of Constable, whose landscapes were still popular in Paris at that time.

In 1854, Breton returned to live in Courrières, and started to paint agricultural workers in the local landscape. His style changed dramatically, and the following year he enjoyed success at the Salon in Paris.

The Gleaners (1854) won a third-class medal at the 1855 Paris Salon, and was Breton’s first masterpiece. It shows the poor women and children of Courrières out scrounging what they could from the fields after the harvest had been cut – an age-old activity recorded in the Old Testament and before which enabled the poorest in rural communities to put bread on their table.

Overseeing the gleaning is the garde champêtre (village policeman), an older man distinguished by his official hat and armband, who was probably an army veteran. In the background, behind the grainstacks which were later to be such popular motifs for the Impressionists, is the church tower of the village of Courrières, surrounded by its houses.

Breton had started to plan this painting soon after he returned to live in the village. He made a series of studies, several of which survive, for its figures, but the view appears to be very faithful to reality. The figure of the young woman walking across the view from the right (in front of the garde champêtre) seems to have been modelled by the daughter of Breton’s first art teacher, whom he married in 1858. He sold this painting for the astonishing price of two thousand francs, which must have been strong endorsement of his change of genre and style.

Love Token (1854-55) was shown at the same Salon, and is a more intimate glimpse into a moment in the lives of the three young women who seem dwarfed by the high stand of wheat behind them. Although few in number, the poppies are particularly brilliant and anticipatory.

Breton did not show The Burning Haystack (1856) at the Salon, but in London, after it had already beem sold. It shows the frenetic but co-ordinated efforts being made by the people of Courrières to extinguish a fire which has broken out in one of the grainstacks. Each of its multitude of figures is playing their role as part of the whole, working from an unseen script.

Its figures remind me of Frith’s paintings of London stations or Derby Day, but it is the unity of purpose which is so strikingly different here.

No sooner than that painting was sold, Breton was working on the plans for his next masterpiece. By early 1856, he already had a good idea of its composition, and may have painted this Study for The Blessing of the Wheat in Artois (c 1857). Lacouture (2002, p 98) offers an extract of a letter from Breton to his then fiancée Élodie:
Against a dazzling background of light in which the gold of the wheat combines with the emerald green of the clover, losing itself finally in the sky in a warm, transparent vapour, a solemn and silent procession of country folk moves slowly and piously along, with the sun at their backs and their shadows in front.

Although this image of Breton’s finished The Blessing of the Wheat in Artois (1857) is far from good, for which I apologise, I hope that it gives some idea of the brilliance of the painting, now in the museum in Arras. The church tower in the background helps orientate ourselves with respect to the village, and just to its left is the distinctive hat of the garde champêtre.

This was shown at the Salon in 1857, where it was admired by Corot, Troyon, and the older generation of artists, awarded a second-class medal, and was purchased for the Musée du Luxembourg – for the sum of five thousand francs.

In the Spring of 1858, Breton married his fiancée Élodie De Vigne.

In addition to his more major works, Breton painted a steady stream of portraits of those living in the countryside, here The Little Dressmaker (1858), a young woman busy making and mending. Unlike many landscape painters of the century, Breton was skilful and sensitive in his figurative painting.

Major works followed ever more frequently. The Dedication of a Calvary (1858) is a very personal record of an event which occurred in September 1836, when Breton was only nine years old. The procession has just come out of church, for the dedication to take place on a plot of land, reserved for the Breton family graves, which had just been exchanged with the Church of Courrières, whose tower dominates the right third of the canvas.

The artist’s family and friends were models for many of the figures shown, his wife appearing at least three times, for instance.

Although well-received when it was shown at the Salon in 1859, it was Breton’s most famous work, Calling in the Gleaners, which earned him a first-class medal there. As usual, he worked up a series of studies for its figures, among them The Gleaner (1859), painted on cardboard.

Calling in the Gleaners (also known as The Recall of the Gleaners, Artois) (1859) is one of the treasures of the Musée d’Orsay, and on its own almost justifies a visit to Paris. With the light now fading, and the first thin crescent of the waxing moon in the sky, the loose flock of weary women and children make their way back home with their hard-won wheat. At the far left, the garde champêtre calls the last in, so that he can go home for the night.

The contrast between the rich glow of the setting sun at the right and the figures is unfortunately too great for this image to capture. You really do have to see the original.

That year, the Bretons’ only daughter was born: Virginie went on to paint too, and one of her paintings inspired Vincent van Gogh.