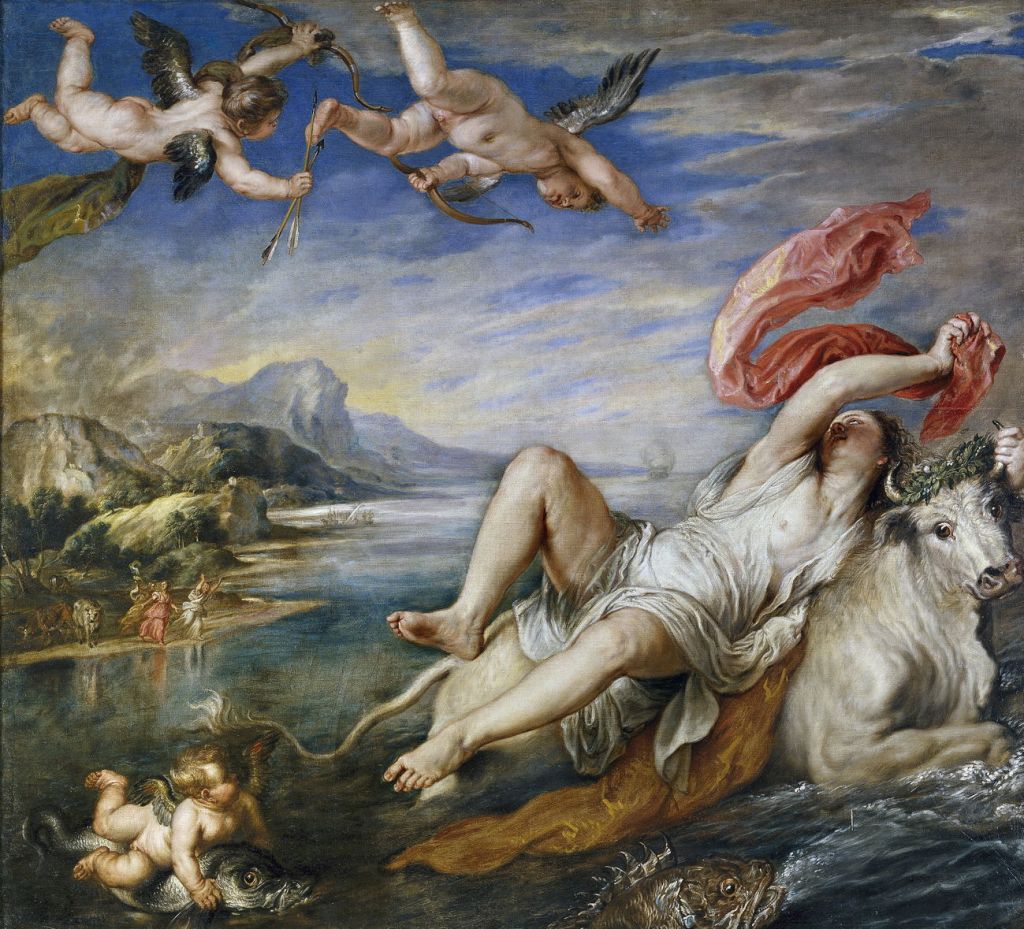 The final myth in Book 2 of Ovid’s Metamorphoses is told very briefly – in less than thirty lines of Latin – and ends part way through the story. This is the famous rape of Europa, although here Ovid only tells us of her abduction, another of Jupiter’s adulterous acts.

This time, Jupiter assumes the appearance of a white bull, placed among a herd which is visited by Europa and her companions:
Jove laid aside his glorious dignity,
for he assumed the semblance of a bull
and mingled with the bullocks in the groves,
his colour white as virgin snow, untrod,
unmelted by the watery Southern Wind.
His neck was thick with muscles, dewlaps hung
between his shoulders; and his polished horns,
so small and beautifully set, appeared
the artifice of man; fashioned as fair
and more transparent than a lucent gem.
His forehead was not lowered for attack,
nor was there fury in his open eyes;
the love of peace was in his countenance.

Europa falls for his trap, and befriends the white bull:
When she beheld his beauty and mild eyes,
the daughter of Agenor was amazed;
but, daring not to touch him, stood apart
until her virgin fears were quieted;
then, near him, fragrant flowers in her hand
she offered,—tempting, to his gentle mouth:
and then the loving god in his great joy
kissed her sweet hands, and could not wait her will.
Jove then began to frisk upon the grass,
or laid his snow-white side on the smooth sand,
yellow and golden. As her courage grew
he gave his breast one moment for caress,
or bent his head for garlands newly made,
wreathed for his polished horns.

Once she sits upon him, Jupiter edges to the nearby shore, then suddenly whisks her off across the Mediterranean:
The royal maid,
unwitting what she did, at length sat down
upon the bull’s broad back. Then by degrees
the god moved from the land and from the shore,
and placed his feet, that seemed but shining hoofs,
in shallow water by the sandy merge;
and not a moment resting bore her thence,
across the surface of the Middle Sea,
while she affrighted gazed upon the shore—
so fast receding. And she held his horn
with her right hand, and, steadied by the left,
held on his ample back—and in the breeze
her waving garments fluttered as they went.

Jupiter (the white bull) takes Europa off to Crete, where he rapes her. For Ovid, this is a cliffhanger ending to the book which leads the reader into the start of Book 3. He gives a fuller account of this myth elsewhere (in his Fasti), as do many other classical authors.

Even in this succinct summary of the abduction phase, there are some key facts: Jupiter masquerades as a white bull, and lures Europa to sit on his back. When she does, he edges to the water, and suddenly bolts over the sea. These are common to most of the other accounts of this myth.

The abduction of Europa has long been one of the most popular stories for paintings, and innumerable artists have painted its scenes. Many of those are superb paintings, but only a few have made serious attempts to tell this story faithfully to the myth. Doing so requires two actors: Europa, a fair maiden, and a white bull, which the viewer must recognise as Jupiter in disguise.

Titian’s glorious The Rape of Europa of 1560-62 is one of his best-known paintings, and can be seen today in two copies, this larger one in Boston, and a smaller version in the Dulwich Picture Gallery in London. These show an unmistakeable Europa on the back of a white bull, which is just starting to bolt out to sea. Europa is not sat astride the bull, but reclines in a manner which anticipates her fate on Crete.

Over sixty years later, in 1628-29, Rubens made a copy which is rightly as famous as the two Titians, in his The Rape of Europa, which is now in rather better condition than Titian’s originals, and one of the treasures of the Prado in Madrid.

The snag with the Titians and Rubens’ copy is that they assume the viewer will recognise the scene, and know that the white bull is actually Jupiter. I also struggle with their use of Cupids, when Europa was not seduced, but abducted and raped.

Rembrandt’s The Abduction of Europa (1632) is almost contemporary with Rubens’ copy, and not one of his better-known works. It conforms to the version in Metamorphoses, but loses dramatic effect by placing the bolting bull in a much larger (and very Dutch) landscape, dominated by Europa’s carriage, large trees, and a distant port. There is also nothing to tell the viewer that this bull is actually the king of the gods.

Tiepolo’s The Rape of Europa (c 1725), a century after Rembrandt’s, not only dilutes its story in excessive ornamental figures, but shows an earlier moment, before Europa has started to make her acquaintance with the white bull. But it does introduce a new and valuable device: on the cliff above Europa is a black eagle, signifying Jupiter’s presence.

Surprisingly few painters felt it necessary to include an eagle in their paintings of Europa. François Boucher’s The Rape of Europa (1732-34) is one which does this favour to the viewer, although he seems to have ignored the fact that the bull was white. Boucher’s voluptuously decorative flowers, Cupids, and scantily-clad maidens may be typical of the Rococo, but seem wholly inappropriate to this story.

A few years later, Jean-Baptiste Marie Pierre painted his The Rape of Europa (1750), which at least advances the story to the point where the bull is accelerating away from the shore. Under the glowering eyes of the eagle, the floral romp of accessory figures is being dispersed in disarray. And, like Boucher, Pierre does not show us the white bull which we had come to expect.

There are dozens of other fine paintings of this myth which fall more significantly short of telling its story. For without a white bull and a visual clue that this is not just a bull, they could just be depicting a beautiful bird on the back of a bolting bull, couldn’t they? As for me, I’ll stick with the Titian/Rubens, which convey Ovid’s words better than any other.