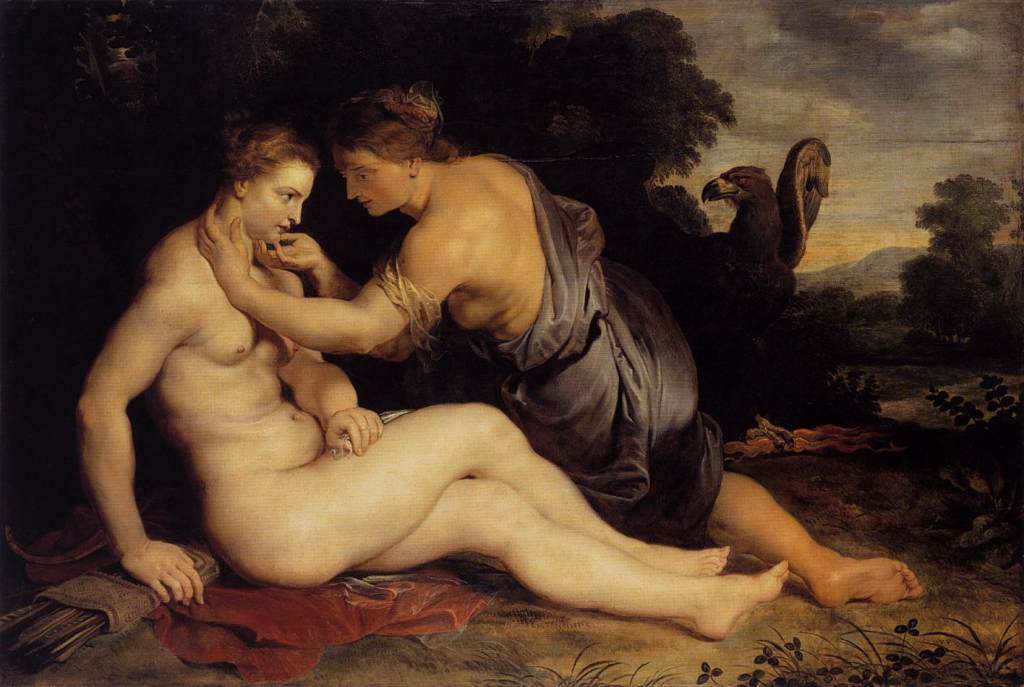 After the Chariot of the Sun had almost destroyed the earth by fire, Ovid tells us that Jupiter checked the walls of heaven, then surveyed the land to assure himself that it was recovering properly. During that excursion from the heavens, he caught sight of Callisto, a nymph who (as so often happens) inflamed his fancy.

What follows is, on the face of it, one of the cruellest stories in the whole Metamorphoses. Jupiter rapes Callisto, who falls pregnant. Diana then throws her out of her band of chaste followers. Once her son is born, Juno drags her away by her hair, and turns her into a bear. Later, when Callisto’s son is just about to kill her, Jupiter finally takes pity on them and catasterises them into the Great and Little Bear constellations, but even then Juno adds a bitter twist to the end.

Is this just a story of sadistic misogyny, though?

Callisto, who is remarkably never named by Ovid in his account, is apparently a daughter of Lycaon, the wolf-man who fled from Jupiter well before the flood. Here Ovid appears to have made a minor error in continuity, as we were told that the only humans who survived the flood were Deucalion and Pyrrha.

Jupiter watches Callisto rest from the heat of the noon sun, and decides that this time he will get away with deceiving Juno, his wife. He therefore appears to Callisto as Diana, the chaste goddess of the hunt. When Callisto tells him (in the guise of Diana) that Diana is even greater than Jupiter, he knows that she is all but conquered:
Jove heard and smiled, well pleased to be preferred
above himself, and kissed her many times,
and strained her in his arms, while she began
to tell the varied fortunes of her hunt.—
but when his ardent love was known to her,
she struggled to escape from his embrace:
ah, how could she, a tender maid, resist
almighty Jove?—Be sure, Saturnia
if thou hadst only witnessed her thy heart
had shown more pity!

The rape complete, Jupiter flies back up to heaven, leaving a bewildered and shocked Callisto to return to Diana and the other nymphs. But Callisto falls pregnant, and one day, when she is quite obviously pregnant, when out with Diana and the other nymphs, they stop to bathe. Callisto’s pregnancy is the ultimate demonstration that she has not been chaste, and Diana throws her out of the group:
Diana in a rage exclaimed, “Away!
Thou must not desecrate our sacred springs!”
And she was driven thence.

Juno had also sensed the situation, and worked out her husband’s role. Instead of taking it out on him, though, she aims her wrath at Callisto. Juno waits until Callisto’s son, Arcas, is born, then vents her wrath not on the rapist, but his victim:
So saying, by her forehead’s tresses seized
the goddess on her rival; and she dragged
her roughly to the ground. Pleading she raised
her suppliant arms and begged for mercy.—While
she pled, black hair spread over her white limbs;
her hands were lengthened into feet, and claws
long-curving tipped them; snarling jaws deformed
the mouth that Jove had kissed. And lest her prayers
and piteous words might move some listening God,
and give remembrance, speech was so denied,
that only from her throat came angry growls,
now uttered hoarse and threatening.

Transformed into a bear, Callisto is distraught, and roams the woods alone. When her son Arcas reaches the age of about 15, he comes across his mother, still a bear, but neither knows the identity of the other. Arcas is just about to kill the bear when Jupiter finally takes pity:
but not permitting it the god of Heaven
averted, and removed them from that crime.
He, in a mighty wind — through vacant space,
upbore them to the dome of starry heaven,
and fixed them, Constellations, bright amid
the starry host.

As Juno puts it, “thus the guilty rue their chastisement!” and she sails off through the heavens in her chariot with peacocks.

A short story involving three metamorphoses, two of which form constellations (‘catasterisation’), there are two remarkable features about it: Ovid’s utter depersonalisation of Callisto by never mentioning her name, and the stark contrast with Io’s rape.

I believe that Ovid has left enough in the way of clues to make it clear that Callisto’s story is a parody of what all too often happens after a rape. Both men and women twist the facts to somehow lay the blame not on the rapist, but on the victim, just as Diana and Juno did. This stigma only grows when they become pregnant as a result, and they are seen as guilty harlots to be chastised and ejected from society.

My first choice for the depiction of Callisto with Diana/Jupiter is therefore Rubens’ more subtle and thought-provoking Jupiter and Callisto from 1613. Diana actually looks a tad more masculine than in most depictions, and the facial expressions are more serious, and Callisto hesitant and suspicious. She also has her right hand on her quiver, and her left hand holds one end of her bow.

Most importantly, Rubens tells us that this Diana is more than meets the eye: parked in the background is Jupiter’s signature eagle, with its own prey in its talons.

Jean Simon Berthélemy’s much later Jupiter, in the Guise of Diana, and Callisto, which was probably painted around 1800, may have been inspired by that Rubens, but has a slightly different twist. Callisto appears coy and cautious, and Diana very persuasive. If only Callisto were to turn around and see Jupiter’s eagle, she might understand the trap she is in.

Although Callisto and Diana/Jupiter are not as sensitively shown in this Jupiter and Callisto from about 1630, attributed to Karel Philips Spierincks, and there are plenty of misleading Cupids, the artist has used multiplex narrative to great effect. For in the distance, we see Juno dragging Callisto along by her hair.

There are somewhat fewer paintings of the discovery of Callisto’s pregnancy by Diana. Most are, sadly, barely disguised romps of naked women in a stream.

Titian’s Diana and Kallisto from 1556-59 is far better than the rest. Diana is shown just right of centre, with her characteristic coronet, pointing down at the nymph at the left who seems to have fallen into a swoon while being undressed, and whose belly suggests that she is quite possibly pregnant. Some of the other nymphs are actually wearing robes, too.

Having sorted through dozens of paintings and prints which claim to depict this story, I was surprised that none alluded to the rest of the story by showing a bear wandering sadly at the edge of a wood. Perhaps the patrons paid better for exposed flesh than good narrative.