Following the release of Sierra 10.12.6, this list has been superseded by the new list for 10.12.6. This list is no longer maintained: please refer to that last for the latest information.

Macs which are left running, without system sleep, for longer than about a week may start to make Time Machine backups at very irregular intervals. This is almost certainly the result of a bug in Grand Central Dispatch’s Duet Activity Scheduling (DAS), which suddenly stops performing regular evaluations of its list of scheduled activities.

This is also likely to affect all other scheduled activities, and could for example make servers unreliable when they have been running for periods of around 14 days or more. Although this appears most commonly when a Mac has been running for over ten days, it can occur after just two days.

Full details and log excerpts are here. I have reported this to Apple on its Radar system.

Workaround: restart the Mac every week or so, or possibly to allow it to sleep.

About This Mac / Storage never completes 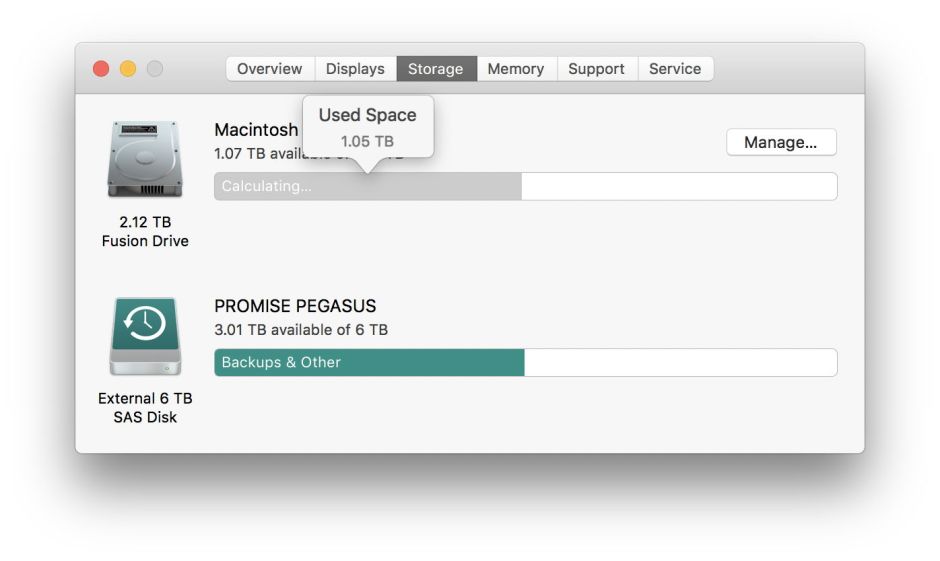 If you open About This Mac and select the Storage tab, the top bar should, after a while, display the disk usage on your startup volume. Many users report that this remains stuck at Calculating…, and that one or more of the sections in the left of the Manage… dialog also remain busy and never report a size, even after months. These appear to be bugs, and have been present since 10.12. No workaround has been discovered.

The Console utility does not provide full access to log entries already gathered before the app is opened. This has been the case since Sierra 10.12.

Workaround: use the log show command in Terminal, or LogLogger5d from here. Alternatively, you can export the whole log to a .logarchive file, then browse that using Console.

Using log show, the --start and --end options now work better than in 10.12, but still do not discover all log entries in the specified time period, or may use an incorrect time period. Widening the time window will normally result in discovering more entries in any given period. There also appear to be deeper issues in the new log system itself, which are discussed here and timestamp drift is discussed here.

Workaround: widen the time window specified by --start and --end, or use --last instead.

Additionally, the log collect --size option still does not restrict the size of log entries output – it is functionless and there is no workaround.

Recovery mode – may require a wired USB keyboard to enter

Prior to macOS Sierra, it was usually possible to enter Recovery mode, holding the Command and R keys during startup, using a wireless keyboard. Trying to do the same in Sierra 10.12.1 or later may fail, and normal startup proceeds.

Workaround: use a wired (USB) keyboard, or connect an Apple Magic Keyboard using its charging cable.

Energy Saver pane – inconsistencies in controls, and misbehaviour on some models

The features available in the Energy Saver pane of System Preferences are inconsistent between Macs, and incomplete, for example not providing a separate control slider for system sleep on some hardware. Further details are here.

These are long-standing issues which date back to El Capitan.

This long-standing but intermittent bug dates back to Mavericks if not earlier, and I have whinged about it here and here. It was also present in every version of El Capitan. The only workaround is to select a different folder, then to select the correct folder again.

There are several bugs in the Finder’s handling of maximize (zoom), which are most prominent, and perhaps largely confined to, List views. The most obvious, reported here, is that maximising List views often doesn’t result in a window which is deep enough to contain all the items in the view, even though there is ample space to do so. Various other issues have been reported – see the comments to this article for fuller details.

Although these don’t have major impact, and can be worked around, they are messy and inconsistent.

There is a zero-day vulnerability in El Capitan’s and Sierra’s SIP which could be locally exploited. Further information is here, and full details here.

As this cannot (yet) be exploited remotely, users should be wary of this potential for local attack. Although awaiting confirmation, there is nothing in the security notes to suggest that this has been fixed in 10.12.2 or 10.12.3.

The ‘folder’ ~/Library/Mobile Documents cannot be opened in the Finder, but redirects to iCloudDrive. The odd behaviours associated with this are detailed here, and are not bugs but ‘features’. The workaround is to access them via Terminal, as detailed in that article.

Sometimes, when typing normally, letters are incorrectly duplicated although if the key had been held pressed for too long, that would not have resulted in keystroke repeat, but would have popped up the accented character picker. This has been a sporadic problem since El Capitan and persists in Sierra, although it now appears quite infrequent.

I suspect the workaround is to use a wired keyboard.

Bluetooth – spontaneous disconnections and others

Although much improved from El Capitan, there are still problems which may be attributable to bugs in Bluetooth drivers. These include spontaneous disconnection of connected devices such as the Magic Trackpad 2, and loss of Continuity features on some models. These are generally infrequent, and now seem innocuous.

Thanks to Tony for reporting this.

OS X internals – clicking on a window causes it to jump

When switching between apps by clicking on a window, sometimes the selected app comes to the front and its window jumps to a new position on screen. This long-standing bug, which persisted through versions of El Capitan, now seems to occur less frequently in 10.12.2, but does still happen at times.

With the Messages app, in 10.12.3, when you first switch to the app by clicking on its window, you may be unable to place the insertion point of the cursor in its text editing box, but have to click on the head of the window, which then causes the window to jump to a different screen location. Only then can you start editing a new message.

The workaround is to switch to that other app by clicking on its icon in the Dock.

Several issues have been reported connecting to Active Directory. Among these is trying to access a shared drive where the user isn’t explicitly given access, but is in an Active Directory group which does have access. See Comments below.

The security show-keychain-info command and verb do not return their results to standard output, but to standard error. This may apply to other verbs (not tested). The path supplied also has various issues with supplied path strings, which may result in errors. Further details are here.

Workaround: collect its output from the standard error stream when calling from other code.

Previous bugs believed to have been fixed in 10.12.3

An obscure bug in Safari which surfaced during battery endurance tests has been fixed. This resulted in shortened endurance if the Safari Develop menu was enabled, and caching turned off there. It is most unlikely to affect ordinary users, it seems.

Please add your own experiences and I will incorporate as necessary…