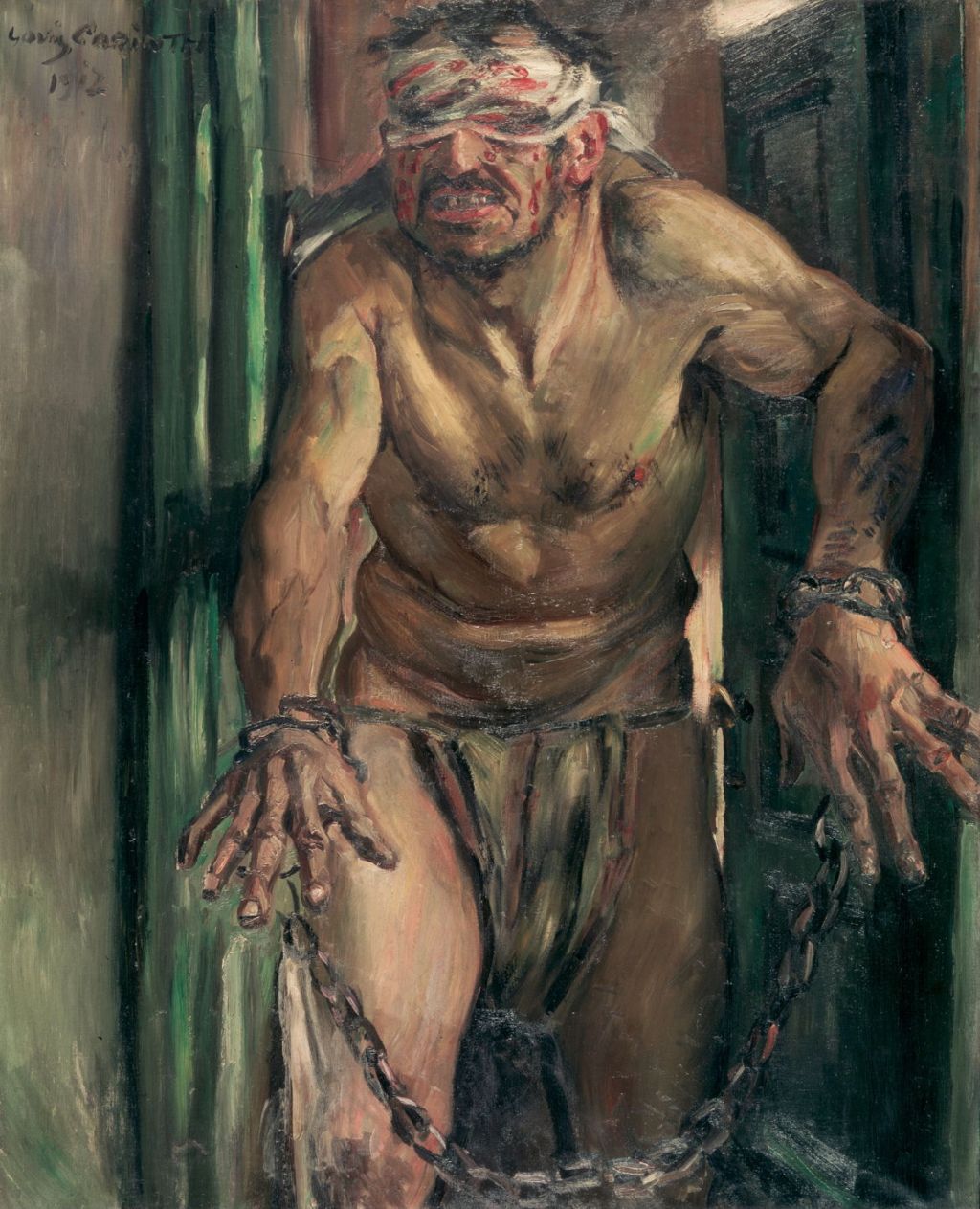 In December 1911, when he was 53 and at the peak of his career, Lovis Corinth suffered a major stroke. When he regained consciousness, he did not even recognise his wife Charlotte, and his left arm and leg were paralysed. As he had painted his entire professional career with his left hand, it looked as if that career might have ended.

Thankfully, over the following weeks, he made a rapid recovery. His left arm remained weak for some time, and he needed a stick when walking, but by February 1912 he had completed his first self-portrait since his stroke, and was painting actively once again.

Corinth’s paintings changed visibly after his stroke. There is controversy among commentators as to how much of this change was the result of the effects of his stroke, and how much his launch into Expressionist style was intentional on his part. Another question is whether any residual weakness or impaired hand-eye co-ordination may have brought other changes to his technique. Did he, for example, have to learn to paint using his right hand as compensation?

One useful way to assess change is to look at his self-portraits, which provide a visual record of what was happening in his mind and body over the years prior to the outbreak of the First World War.

One of his last completed prior to his stroke, Self-portrait as a Flag-Bearer (1911), shows a proud artist, posing in a suit of armour, a standard borne behind him. His pose is reminiscent of Rembrandt’s self-portrait of 1636. It reflects his perception of his role in the Secession, and the importance of the Secession in the history of art.

His brushwork is rough and very painterly throughout, even over his face, and the background is sketched in gesturally.

Self-portrait with a Panama Hat was painted in 1912, during his recovery from the stroke, and differs very little in its facture. His facial expression and bearing have changed totally, though, his eyes staring through the struggle that he has had, in concerned contemplation.

By 1913, in his Self-portrait with Tyrolean Hat, he appears to be on holiday in the South Tyrol, marked by his headgear and the inscription at the right. His face, though, has become more gaunt and worried. Although he appears to be holding his brush in his right hand, it is actually clasping several brushes and his palette, indicating that he was painting with his left hand. If painted from a mirror image, of course, the handedness could be reversed. There does not appear to have been any significant change in his brushwork.

Corinth gets back into his suit of armour for his 1914 Self-portrait in Armour, in which he holds a pole in his left hand (assuming the image is not mirrored). This is an excellent comparator against his 1911 portrait above: there has been little if any change in facture. But his face has changed, and there is worry still in his expression. His chin is no longer raised in pride, but he stares straight ahead with determination.

Painted at the start of the First World War, his armour here is probably a response to that, and to the universal call to arms. Corinth had a great admiration for Otto von Bismarck.

Self-portrait in the Studio (1914) is the last in my series, and shows him painting with the brush held in his left hand, although this would be reversed if the image was mirrored. He appears older, more anxious, perhaps even stressed, as he looks directly at the viewer. Again, there is little obvious change in his brushwork from 1911.

Once Corinth was fit enough after his stroke, he and Charlotte travelled for three months of convalescence on the French Riviera at Bordighera.

Balcony Scene in Bordighera (1912) shows Charlotte with a miniature parasol to shelter her from the dazzling sun, on the balcony of their accommodation there. His rough facture has extended more generally now from his nudes and sketches, marking his move from more Impressionist landscapes to Expressionism.

There are also some interesting traits in his brushwork which (at least partly) reflect his recovering condition. Verticals – indeed the whole painting – tend to lean to the left, in opposition to the diagonal strokes used to form the sky, which are more typical of someone painting with their right hand.

His previously quite rigorous perspective projection has been largely lost, although he maintains an approximate vanishing point at the right of the base of Charlotte’s neck. He has employed aerial perspective, but the painting lacks the effect of depth in his earlier work.

Indoors, he painted an Italian Woman in a Yellow Chair (1912). There has been speculation as to whether this was not a local Italian model at all, but Charlotte. The hat does seem to have been his wife’s, and appears in a sketch of her which he made at about the same time.

Storm off Cape Ampelio (1912) shows rough seas at the cape near to Bordighera. Its brushwork has great vigour, and captures the violent surges which occur when incident and reflected waves meet. Again its verticals are leaning to the left.

His first major painting following his stroke returned to the theme of Samson. This autobiographical portrait of The Blinded Samson (1912) expressed his feelings about his own battle against the sequelae of his stroke.

In the Samson story, it shows the once-mighty man reduced to a feeble prisoner, forced to grope his way around. No doubt Corinth did not intend to refer to the conclusion of Samson’s story: with the aid of God, he pulled down the two central columns of the Philistines’ temple to Dagon, and brought the whole building down on top of its occupants.

Although quite rough in its facture, Corinth has now restored his verticals and clearly got the better of any residual mechanical problems in painting.

This wonderful Portrait of the Sculptor Nikolaus Friedrich (1912) at work was not the first to be painted by Corinth, who had made a previous portrait in 1904, when he was young and muscular. Eight years later he is seen in the midst of a broad and representative range of his work. Friedrich died two years later, when he was only 48.

At the Mirror (1912) is an ingenious painting, which uses the woman’s reflection to make clear the struggle that Corinth – here only seen in the reflection – had gone through to paint his images. Instead of providing the viewer with a faithful and detailed reflection, that image is even more loosely painted, rendering her face, and Corinth’s, barely recognisable.

View of the Jetties in Hamburg (1912) shows the continuing looseness of his facture. Its verticals are far more consistent and vertical than in his paintings in Bordighera, and his brushstrokes are very varied in their orientation.

In the first year since his stroke, Corinth’s painting had come a long way. What he must have feared would turn out be career-ending was not. The event may have accelerated his move to Expressionist style, but it does not seem to have driven or determined it.