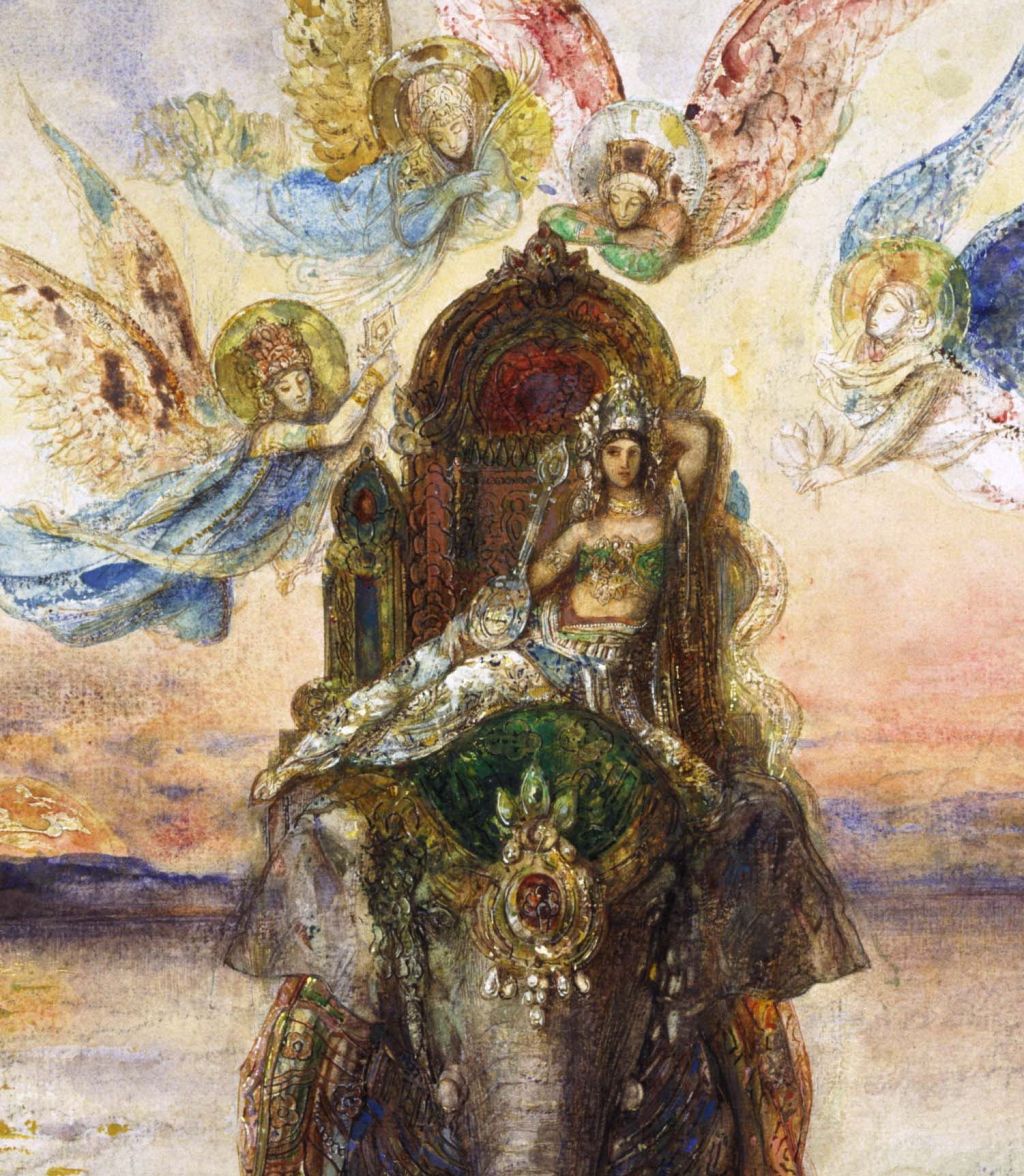 For the previous twenty-five years, there had been two women in Moreau’s life: his mother, who in her old age had grown so deaf that the artist wrote her notes explaining each of his paintings, and his partner/mistress/muse Alexandrine Dureux, whose very existence was a close-kept secret. When his mother died in 1884, Moreau’s grief caused him to stop painting altogether for some months, and he became a temporary recluse.

Over the next couple of years, his paintings reflected his emotions as he came to terms with that grief. As part of that process, he seems to have revisited some of his previous grand themes, and some of his recurrent motifs.

Contrasting with the triumph of Oedipus over the Sphinx in his first great Salon success, The Triumphant Sphinx, or The Victorious Sphinx (1886) considers the opposite, with a succession of corpses of those who failed to solve the Sphinx’s riddle. A very similar depiction of the Sphinx itself dominates the gloomy scene, in which the brightest colour is the distant sea.

Moreau returned to his consideration of the suicide of the classical poet Sappho in this watercolour of Sappho at the Leucadian Cliff (c 1885), showing her clinging to her lyre as she falls to her death on the rocks below. This is lit by another of his saturnine suns.

He also developed his group portrait of three Sirens into a fuller account of the story of Odysseus/Ulysses in his oil painting of The Sirens (c 1885). This is quite a conventional depiction, and is a marked contrast to his other works of this period in its lack of symbols and decorations, as if he had originally intended it for public exhibition, perhaps.

He continued his series of paintings of beautiful nudes with Eve (1885), a watercolour in which a small winged Satan is whispering temptation into her ear, as the coils of the serpent rest at the base of the tree’s trunk. Eve’s unnaturally bent neck is a pose which had become popular among the Pre-Raphaelites, although here it grants access to her ear.

This period also saw the development of the most legendary beast of all, The Unicorn (1884-85), as a theme in his paintings. With its rich symbolic associations and strong showing in art of several cultures, Moreau repeatedly painted a single unicorn being fondled by an almost nude woman, alluding to the expansive complex of mediaeval myths which associate the animal with a virgin or the Virgin, who seem to be the only humans capable of trapping a unicorn.

Unicorn (1885) is a variant, here probably executed in watercolour.

A trio of elaborately-decorated winged angels, one playing a lyre, forms the centre of his Voices Of Evening (1885), sketched in oils.

Surprisingly, Moreau’s more substantial paintings from this period seem to have escaped much attention, perhaps because they were not exhibited in public at the time, and have not entered major public collections. His oil painting of Apollo Vanquishing the Serpent Python from 1885 tells a rather obscure classical Greek myth concerning the earth-dragon Python (not the snake known as a python).

Probably the best-known of the classical oracles, that at Delphi, was located at an ancient place named Pytho, considered to be the centre of the earth. The Python was the dragon who guarded the precious stone, or Omphalos, marking this sacred point. Much later, the god Apollo took a dislike to Python, possibly because of its previous actions pursuing his mother, the goddess Leto. Apollo came and fought Python, killing the dragon, and enabling Apollo to make Delphi his own.

Moreau shows Apollo, the sun god, in his full glory and ready to do battle with Python below.

The Abduction of Ganymede (1886) tells the more than risqué story of the classical myth of Ganymede, which is centred on child abduction and what we would now know as paedophilia, but the classical Greeks somehow normalised as pederasty.

Ganymede was the son of Tros, and one of the early citizens of Troy, long before the war. One day during his youth, Ganymede was tending a flock of sheep near Mount Ida, not far from Troy, when Zeus abducted him using an eagle; the bird is variously described as Zeus himself or his agent. Ganymede was taken to Mount Olympus, the home of the gods, where he was given eternal youth and immortality, and served as the cupbearer to the gods.

Zeus compensated Ganymede’s father by having Hermes deliver him fine horses. Since then, the eternally beautiful youth became a poetic symbol for an adolescent male who was the partner of an older male, something which became socially acceptable.

Although Moreau does not show any sheep, Ganymede’s dog is left baying at the huge eagle as it steals its young and androgynous master up through the large trees of a flooded wood.

The Sacred Elephant (Péri) (1885-6) is a magnificent watercolour showing Moreau’s best-developed painting of a thoroughly Indian motif. The Indian elephant has a long history as a sacred animal, at the heart of Hindu cosmology in supporting and guarding the earth (echoed by Terry Pratchett’s cosmic model of his Discworld).

Traditionally, the elephant is the mount (vāhana) for Lakshmi, Indra, Indrani (Shachi), and Brihaspati – goddesses, apart from the last who is a sage. Indra’s mount is a white elephant named Airavata, and Indrani is the goddess of wrath and jealousy, so I suspect that Moreau intends the figure mounted on the elephant to represent Lakshmi, the Hindu goddess of wealth, fortune, and prosperity, and wife of Vishnu.

The elephant itself represents wisdom, divine knowledge, and royal power. It is walking in a shallow lake which is rich in exotic vegetation, including lotus and lilies, as the sun is setting. Surrounding the mounted figure are four winged angelic creatures.

The mounted goddess holds a stringed instrument, probably a sitar or near-relative, and is elaborately decorated. Although at first sight the angels might appear European, they too are drawn from the Indian sub-continent, and are richly embellished, apparently paying tribute to the goddess with flowers and a musical instrument.