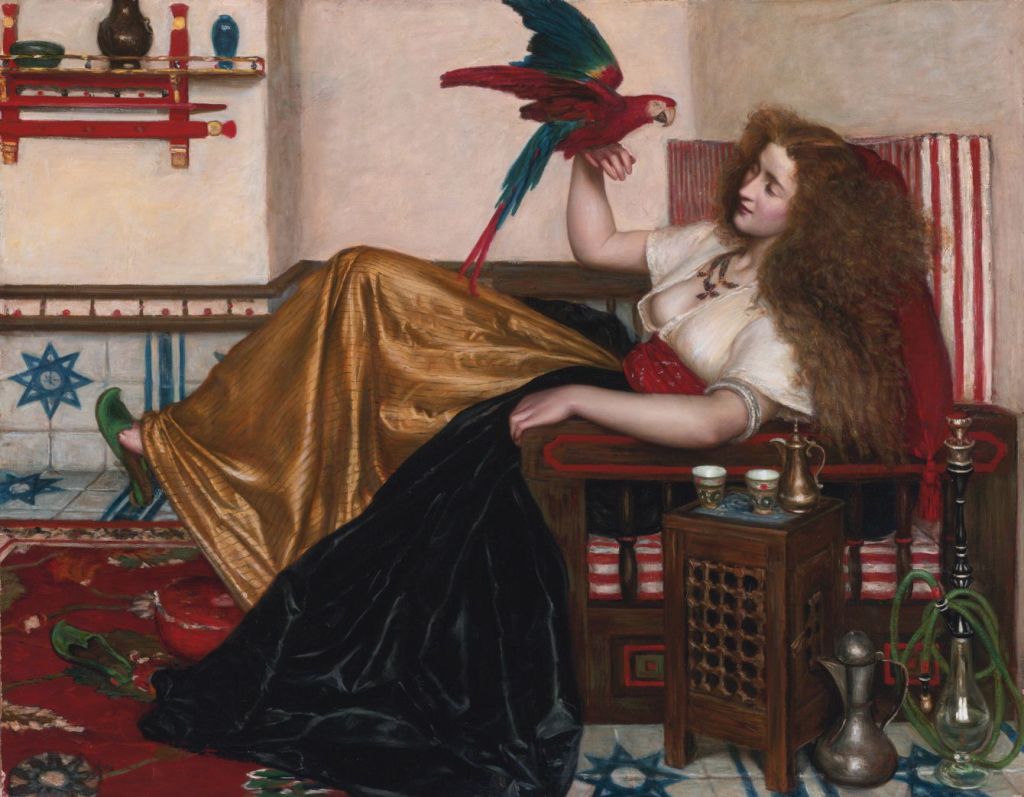 Scholars trying to work in the library of the Oxford Union Society in 1856-7 were often disrupted by the antics of a group of young artists, who were active next door in the Union’s new Debating Hall. That noisy group included some of the leading artists of the day: Dante Gabriel Rossetti, Edward Burne-Jones, William Morris, Arthur Hughes, John Roddam Spencer Stanhope, John Hungerford Pollen, and Valentine Cameron Prinsep.

Tragically, they were not technically prepared for the task, and their brilliant mural, which was said to glow “with a voluptuous radiance of variegated tints”, had all but vanished by the time it was restored in the 1980s.

Who, then, was this Valentine Cameron Prinsep (1838–1904), the least well-known of those members of the Pre-Raphaelite movement?

Val Prinsep, as he was known, was born in Kolkata (then Calcutta), India, to a British colonial family. His aunt was Julia Margaret Cameron, the pioneer photographer who lived near Alfred, Lord Tennyson’s home on the Isle of Wight. Another aunt was the grandmother of Virginia Woolf, the novelist, and Vanessa Bell, the Bloomsbury painter. The family home back in England was Little Holland House, the dower house to Holland House, Kensington, London, and the focal point of a lively artistic social group.

Prinsep was taught to draw and paint by a close friend, George Frederic Watts (1817-1904), who was the permanent house guest of Prinsep’s parents. Some time after he had assisted in Rossetti’s mural in Oxford, he joined fellow students Whistler, Edward John Poynter, and George du Maurier in Marc-Charles-Gabriel Gleyre’s studio in Paris. From there, he went to Italy with Burne-Jones, where he befriended Robert Browning during 1859-60.

Prinsep first exhibited at the Royal Academy in 1862, and from then until his death showed paintings there every year. His early A Girl Carrying Grapes (formerly known as Salome) (1862) shows the strong influence of Rossetti and the Pre-Raphaelites, but I cannot fathom how it might ever have become known as Salome.

Although influenced by Rossetti, Prinsep did not remain a member of his circle. By the 1860s, he was a member of the Holland Park circle – which often met in his parents’ house – with Frederic, Lord Leighton as its focal point. George Frederic Watts and Edward John Poynter, with whom Prinsep had trained in Paris, were also members.

The circles were by no means exclusive, and often met together; it was not unusual for artistic arguments to take place between them, over breakfast at Leighton’s house in London, or in Prinsep’s parents’ house.

This painting is an early and rich example of orientalism, with almost every object and decoration in the view being strongly evocative of the contemporary view of the ‘east’, which included the cultures of North Africa and the Middle East.

Leonora of Mantua (1873) probably refers to the Duchess of Mantua, Leonora or Eleanor of Austria (1498-1558), but that is probably immaterial to this almost monochrome full-length portrait of a high noblewoman in repose.

The subject of his The Artist with his Palette (1874) is sadly obscure now, but it appears to show a young woman painting with oils. By this time, it was entirely socially acceptable for women to paint – Queen Victoria herself was a very competent painter – but mainly in watercolours, and never professionally. One of the strong selling points of tubes of oil paint was that they were less messy and led to less odour, making them particularly suitable for women painters.

À Bientôt (See You Soon) (c 1876) was apparently very well-received at the time, being exhibited at the Royal Academy in 1876, and progressing to the Exposition Universelle in Paris in 1878.

In 1876 or 1877, Prinsep returned to India to research what became a huge painting of the Delhi Durbar, completed in 1880. The Durbar of 1877 was an official event marking the proclamation of Queen Victoria as Empress of India, although she did not attend in person, but was represented by her Viceroy. Unfortunately it coincided with the Great Famine, and came to mark the beginning of the campaign for a free India.

Among the other paintings which he completed during that visit is Martaba, a Kashmiree Nautch Girl (c 1878), which was exhibited at the Royal Academy in 1878. Queen Victoria and her court had a particular fondness for portraits of ‘loyal subjects’ of the empire, and many are still on show at her former palace of Osborne House on the Isle of Wight, where she died.

His View of the Lal Darwaza on the Matwa Road, between the Purana Qila and Old City, Delhi around 1878, is a remarkably loose oil sketch, probably completed en plein air.

Prinsep presented his huge painting of the Delhi Durbar to Queen Victoria, and it was hung in Buckingham Palace. In 1887, he painted a full-length portrait of the Queen.

Fresh Flowers from the Country (c 1881) was a popular theme of the time, one of the many street-sellers of flowers in London. As was usual, she is immaculately clean and idealistically beautiful. This was exhibited at the Royal Academy in 1881, and that autumn at the Walker Art Gallery in Liverpool.

Ayesha (c 1887) is another of his ‘exotic’ oriental paintings. Attempts to determine whether the title refers to any specific source have so far been unsuccessful. Rider Haggard’s very popular novel She, which was published in the same year, contained a Queen Ayesha, and the name is shared with one of the wives of the Prophet Mohammad. There are no pictorial references which might relate to either of those, or to any other Ayesha. This painting was exhibited at the Royal Academy in 1887.

A couple of years later, Prinsep exhibited his best-known nude, The First Awakening of Eve (c 1889). The Royal Academy had seen few nude female paintings between the demise of William Etty in the 1840s, and Frederic, Lord Leighton‘s paintings around 1869, but the gradual switch from Pre-Raphaelite to Aesthetic styles brought more flesh onto the canvas.

Prinsep was surprisingly not elected a full member of the Royal Academy until 1894.

The remaining paintings which I show below are, regrettably, undated.

The Butter Churn shows a young maid making butter using a wooden ‘churn’, a common task in most larger households in the early nineteenth century.

La Festa di Lido shows a feast or festival at the Venice Lido, the long sandbar which protects the city from the Adriatic Sea.

The Green Dress appears to be a straightforward three-quarter length portrait of a young woman.

Home from Gleaning is another almost monochrome painting showing a group of women who have been out salvaging stray cut cereal after the harvest.

The Mandolin Player is a clearly Aesthetic image, showing a young woman playing her lute, thus referring to another artistic modality.

A Venetian Gaming-House in the Sixteenth Century shows a scene of confrontation between two young men at the card table of a gambling den in Venice. The man seated on the left, whose family appear to be backing him, has accumulated substantial winnings, and is reaching across the table for more. The man standing on the right, who seems to be losing badly, has an accusative look, and is clearly unhappy with his opponent’s success.

Both men are armed, and under the table is a large collection of cards which may have been involved in a cheat.

Not as important an artist as his friend, Frederic, Lord Leighton, or Rossetti, Prinsep’s works cover a range of genres and are in need of more systematic survey and study. Some, at least, appear to be of high standard, and merit inclusion in accounts of British painting during the nineteenth century. They are also very relevant to the direction taken by European art in the latter half of that century.