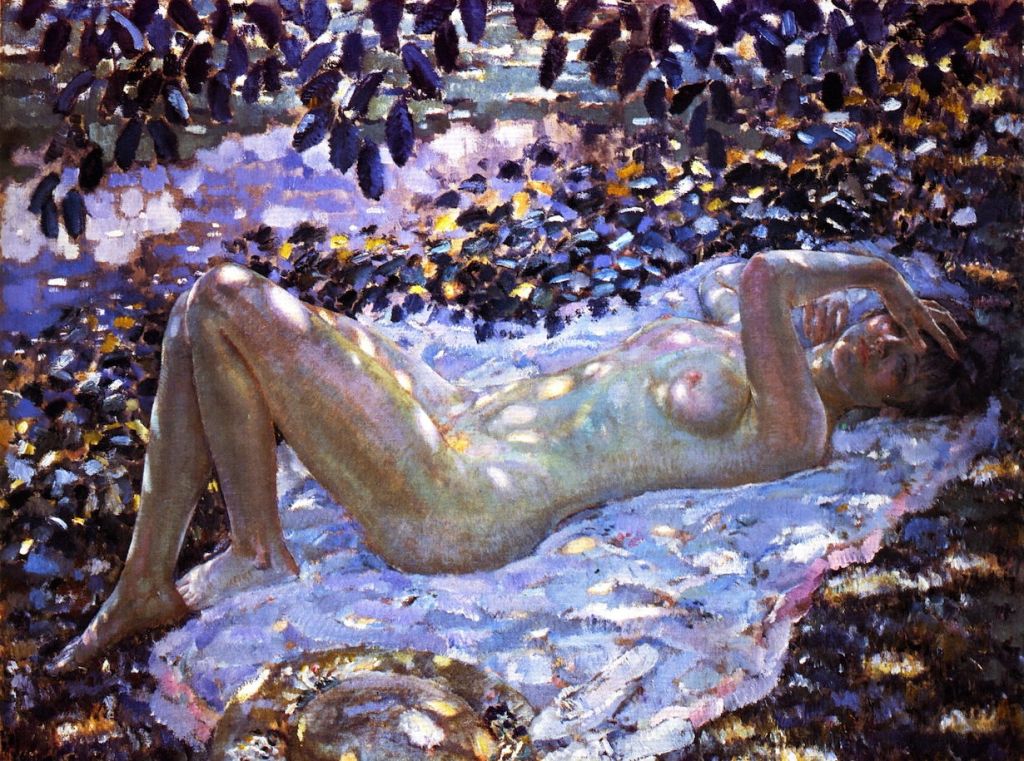 Many of the great American painters of the late nineteenth and early twentieth centuries spent quite long periods in Europe, both training and developing their art. A few spent longer, in fact most of their careers – like Frederick Carl Frieseke (1874–1939).

He was born in Owosso, a small town in central Michigan, but moved to Florida, where his father started a brick factory in Jacksonville. His interest in becoming a painter was kindled when he visited the World’s Columbian Exposition held in Chicago in 1893, which coincided with his completion of High School.

Frieseke then started as a student at the Art Institute of Chicago, before he moved to New York in 1895. In 1897, he resumed his studies at the Art Students League, and started work as an illustrator. However, that did not prosper, so the following year he travelled to Paris, where he studied at the Académie Julian under Jean-Joseph Benjamin-Constant and Jean-Paul Laurens. He also spent some time studying under Whistler.

Initially, he mainly painted in watercolour, but while in Paris he learned to use oils. In the summer of 1898, he visited the artists’ colonies at Katwijk and Laren in the Netherlands.

His early watercolour of Paris, Pont Neuf with Barges (c 1898-99) is fairly typical of his surviving work from this period, with its narrow tonal range and emphasis on drawing rather than colour.

After 1900, though, he concentrated on oil painting, and used higher chroma, as seen in his The Blue Bowl (1901). I am unsure whether the fine patterning in this image results from an optical moiré effect in its processing, or reflects texture in the original.

Luxembourg Gardens, Paris, France (1902) is another landscape from this early phase, when his style was perhaps closest of that of the Nabis.

Before the Mirror (Nude) (1903) is one of his earliest promising nudes, although his colours are still muted and lighting quite even. Frieseke’s devotion to painting nudes was an important factor in his decision to remain in France: during his occasional visits to his home town, he enjoyed shocking “good Church people” with his nudes, but would clearly have found it impossible to work there.

In the summer of 1905, he visited Giverny, where an art colony had formed around Monet’s house and garden. Later that year he married Sadie (Sarah Anne) O’Bryan. Although he was now so close to Monet, his paintings showed little influence from Impressionism, as in his Afternoon at the Beach (1905-6).

The following year, the Friesekes stayed through the summer in the house next door to Monet, which had previously been occupied by Theodore Robinson. They returned to their Paris apartment for the winter, and maintained this pattern until 1919. Frederick Frieseke also kept a studio on the River Epte nearby, which he tended to use for his outdoor figurative paintings. His wife Sadie often modelled for him, but not in the almost obsessive way that Pierre Bonnard was to paint his wife later.

Although Monet was his neighbour for half the year, Frieseke neither developed a close friendship with him, nor was he influenced by him. Frieseke considered that Renoir was a more major influence, as can be seen in his figurative works.

After 1905, his style changed, and he started to concentrate on different effects of sunlight and shade on both clothed and nude women. These were often seen in very textured or patterned surroundings, as in his Grey Day on the River (Two Ladies in a Boat) (c 1908). This appears to have been painted from his studio on the River Epte.

His indoor nudes, such as Nude Seated at Her Dressing Table (1909), at first lacked the delicate textures of those he painted outdoors, sometimes appearing more sculptural or even pneumatic. Seventeen of his paintings were shown in the Venice Biennale that year.

He then entered a prolific phase, in which every figurative painting was on a perfect summer’s day, with diaphanous fabrics and soft beauty, as in his Afternoon – Yellow Room (1910), and Sunbath (1908/1918), below.

Even his non-figurative paintings, like The House in Giverny (c 1912), burst into brilliant colours applied in short strokes and dabs.

He also experimented with effects on patterns on figure and ground, as in his Lady in a Garden (c 1912), whose striped gown appears to have grown from the dense plants around her feet.

Many of his paintings made in his studio on the River Epte explored the effects of dappled sunlight and shadows, seen in his Summer (1914). This was one of his entries in the Panama-Pacific International Exposition, held in San Francisco in 1915, which brought him the Grand Prize there. Nude in Dappled Sunlight (1915), below, is another good example.

Back indoors, in the evening, his informal portraits, like Girl in Blue Arranging Flowers (1915), also came into bloom, as did The Robe (1915), below.

After the end of the First World War, Frieseke’s style changed again, as if the summer was finally over. This coincided with his move, with his wife and their young daughter, to a rural farmstead inland of Deauville in Normandy, in 1920. In his Seated Nude (1920), the light is more suffuse, and the chroma turned down.

In 1920, he was made a Chevalier of the Legion of Honour, which is very unusual for someone who is not French.

By the mid-twenties, his flickering brushstrokes had fused and become smoother too, and the model in his Portrait of a Woman with Cactus (1930) might be wondering where that earlier brilliance had gone. He also returned to painting watercolours.

Some passages in his Girl Sewing (The Chinese Robe) (1931) appear more hurried and peremptory, and its mood has lapsed into a daze instead of his previous dazzle. He visited Nice in the winter, and in the early 1930s toured Switzerland. He died in Normandy on 24 August 1939, just a week before Hitler invaded Poland, and the Second World War broke out.