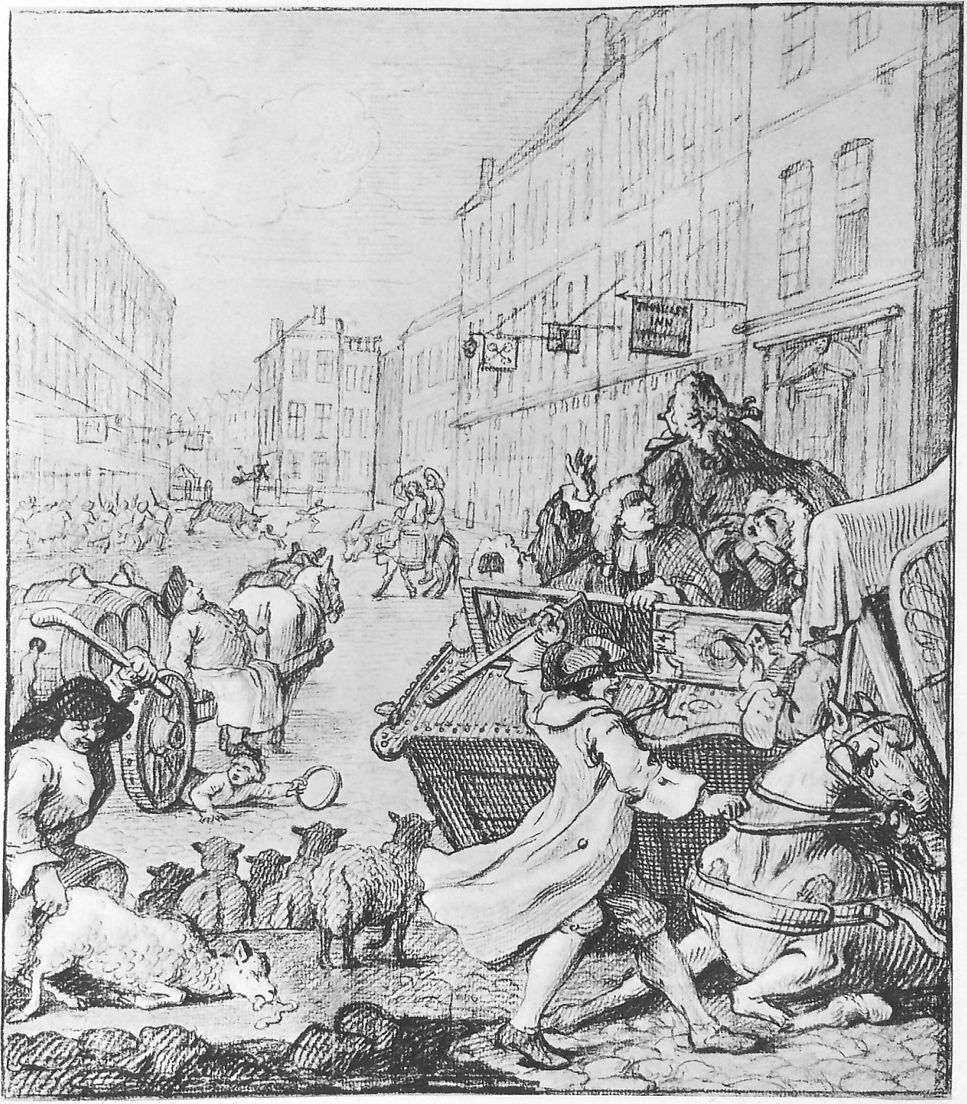 Following his successful narrative series of prints Industry and Idleness, William Hogarth (1697-1764) decided to moralise again over one of his favourite issues: cruelty to animals. Victorian society was even harsher in its attitudes towards animals than it was towards the ‘lower classes’ of humans, and Hogarth saw the two as being linked.

As with Industry and Idleness, Hogarth wanted to reach the hearts of the ordinary people, and to make his prints as affordable as possible. He admitted to simplifying his drawings in order to put his points across as clearly and accessibly as possible. He stated that “neither minute accuracy of design, nor fine engraving, were deemed necessary”.

In a further effort to cut costs, he commissioned them to be turned into woodcuts rather than engraved, but in the end only two of the plates were completed in wood, and Hogarth himself created conventional engravings. The great majority of prints in existence were made from Hogarth’s engravings, with woodcuts being much less common.

The simple narrative runs thus:
Tom Nero, a boy living in the slums of St Giles in London, is one of many children who get entertainment from torturing animals. When he grows up and becomes a Hackney coachman, he beats and harms his horse too. He progresses to become a thief, and brutally murders his pregnant lover. He is arrested, tried, and found guilty of her murder. After his death by hanging, his body is handed over for dissection, and it too is mutilated.

The schoolboy Tom Nero is seen, together with many of his peers, in a street in the slum district of St Giles in London. He is shown in a ragged white coat just below the centre of the image, inserting an arrow into a dog which is plainly in agony. The dog’s owner pleads for mercy, offering Tom a pie, but others help hold the dog for Tom. Just to his left, someone has drawn a hanged man with Tom’s name below, a grim prediction of what is to come.

All around there are vicious acts of cruelty taking place to animals. A cat and dog are fighting, cockfighting is in progress, another dog has a bone tied to its tail, two boys are burning a bird’s eyes out, two cats are suspended by their tails from a vintner’s sign, and a cat has been thrown out of a high window with balloons attached to it.

The Second Stage of Cruelty: Coachman Beating a Fallen Horse (1751)

Tom Nero has now grown up, and is the coachman of a Hackney carriage, shown here in front of Thavies Inn, with the famous Thavies Inn Gate in the background. Tom’s horse, clearly already old, underfed, and ill-treated, has collapsed at the lower left, and broken its right foreleg. Tom is beating it with a club, and has already blinded its left eye with his blows.

Inside Tom’s carriage are four large barristers, who struggle to get out. Also in the foreground, a drover is beating a sheep to death, a small boy is being run over by a brewer’s dray while the drayman sleeps, an overloaded ass is driven on, and an enraged bull has just tossed one of its tormentors.

Posters by the door to Thavies Inn advertise a cockfight, and a boxing match between James Field (who was hanged a couple of weeks before the first prints were issued) and George ‘The Barber’ Taylor, a previous English champion.

The Third Stage of Cruelty: Cruelty in Perfection – The Murder (1751)

It is now the dead of night, 0105 by the church clock, some time later, in a graveyard. Tom Nero has been apprehended by local people at the dead body of a woman, who turns out to be his pregnant partner. Her throat has been cut to the point of almost severing her neck, and she also has deep cuts at the left wrist and on the left index finger. That finger points to an open book which read “God’s Revenge against Murder”, and next to that is the book of Common Prayer. By her body is a box of her valuables, bearing her initials “A G” for Ann Gill, and a bag containing stolen goods.

On the ground around Tom is a pistol, a couple of presumably stolen pocket watches, and one of the group of men restraining him holds a letter from the dead woman reading:
Dear Tommy
My mistress has been the best of women to me, and my conscience flies in my face as often as I think of wronging her; yet I am resolved to venture body and soul to do as you would have me, so do not fail to meet me as you said you would, for I will bring along with me all the things I can lay my hands on. So no more at present; but I remain yours till death.
Ann Gill.

Next to that letter is its open envelope, addressed to Tom Nero.

The Fourth Stage of Cruelty: The Reward of Cruelty (1751)

The noose remains around his neck, and the mutilation which his body is subjected to reflects the cruelties previously inflicted on animals: his eye is removed, his intestines coiled out into a pail, a dog is about to make off with his heart (which is shown in popular rather than anatomical form), and incisions are being made in the chest and left foot. In the left foreground, previous skulls and bones are being boiled to prepare them for anatomical specimens.

The room is the round anatomical demonstration theatre of the Surgeon’s Hall. Presiding over the scene is John Freke, then President of the Royal College of Surgeons of England, who had been an admirer of Hogarth’s work until the pair quarrelled over Handel’s music.

The skeleton on the left is that of James Field, the boxer whose bout was advertised in the second image, and who was hanged just before the first prints were issued. That on the right is of Macleane, a notorious highwayman who was hanged in the previous year. One of the audience is pointing at Field’s skeleton (and looking at the viewer), and the two skeletons are pointing at one another. It is not clear why this is so, and may be a touch of dry humour.

The complete set of final drawings, made in red chalk (with pencil, I suspect), is in the Pierpont Morgan Library in New York. I have been able to locate one early sketch, for the first plate, which gives an idea of Hogarth’s development of the prints. Some differences have been noted between prints made from the engravings, and those from the woodcuts, but I have not been able to locate any images of the latter to show them. As with the previous series, in this section I show the prints mirrored, to enable direct comparison with their drawings.

For this series, Hogarth invited another friend, the Reverend James Townley, to provide the moralising verses which are shown on each of the final prints.

This series was another commercial success, and Hogarth considered that it had some effect in reducing the prevalence and severity of animal cruelty.

As with Industry and Idleness, it lacks the richness of visual cues, clues, and symbols of his earlier series of paintings which were turned into prints; it is interesting that Hogarth returned to that slower and more laborious process for his final narrative series in The Humours of an Election in 1755 (a series which some commentators appear to have overlooked). However, the claim that Hogarth’s drawings for this series were crude or over-simplified does not appear to be borne out: they remain fine works of art, by the master of the narrative series.

Wikipedia on The Four Stages of Cruelty

Hallett M (2000) Hogarth, Art & Ideas, Phaidon Press. ISBN 978 0 7148 3818 2.
Ayrton M & Denvir B (1948) Hogarth’s Drawings, London Life in the 18th Century, Avalon Press. No ISBN. [This has been my source for images of many of the scans above. The book bears no information about copyright, the press has long since vanished as far as I can tell, and I assume ‘fair use’ of these orphaned images. If you know any different, please contact me.]