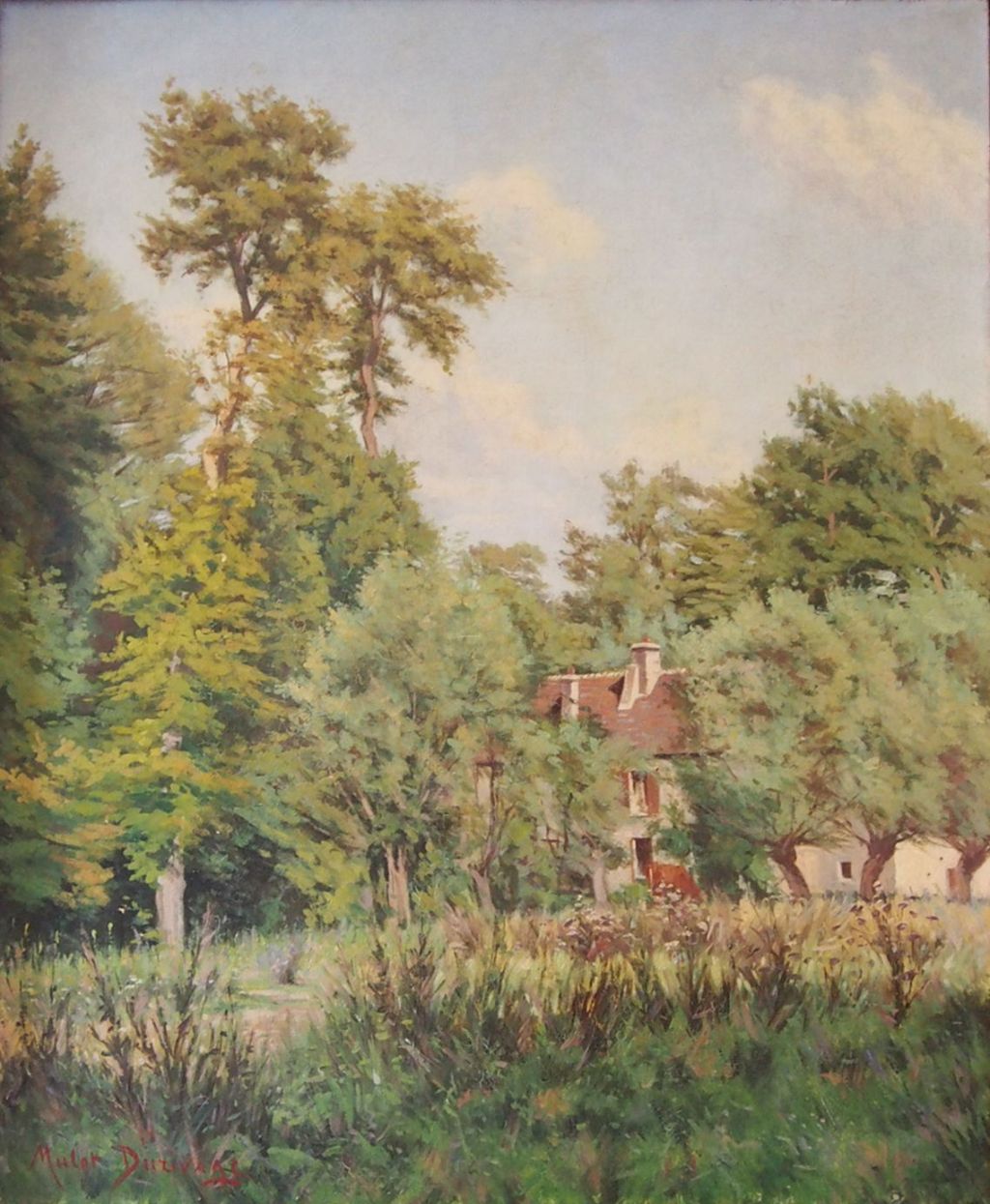 Émilien Mulot-Durivage (1838-1920) (attr), Cotentin Landscape, by the Banks of the Ouve (date not known), further details not known. Wikimedia Commons.

Many of the artists who showed their work at the First Impressionist Exhibition in 1874 have since vanished. This article is a brief summary of the eleven who are now little more than ghosts.

Little is now known about Attendu, who showed six paintings in the First Impressionist Exhibition. He was apparently a pupil of Louis Mettling, and went on to paint mainly still life and landscapes. He worked in Paris and Neuilly-sur-Seine, and was successful in his submissions to the Salon in 1870 and as late as 1898.

He appears to have remained a conventional realist throughout his career, and the few landscapes he painted don’t appear particularly distinctive, or in the least bit Impressionist. His paintings occasionally come up for auction today, but aren’t highly valued.

Less is known about the tragically brief life of this Impressionist landscape painter. He apparently had paintings accepted for the Salon in 1865 and 1876. Among his works were several notable nocturnes. Together with Auguste Renoir and Alfred Sisley, he was one of the appointed liquidators of the first Impressionist company responsible for organising the First Impressionist Exhibition. He also took part in the second, in 1876, but died shortly afterwards.

Moonlight on the Banks of the Oise (1867) is one of his nocturnes which did survive, and was one of his paintings shown in the First Impressionist Exhibition.

His undated Dieppe Beach is a delightful Impressionist rendering of a beach off-season, with a sky which even Boudin would be proud of.

The Road, also undated, has a vivid sky, although its landscape is rather older in style.

Bureau seems to have made some prints: A Muslim lady reclining in her harem by a smoking hooka (c 1870) is a lithograph with tint plate, with added watercolour, after an original by E Prisse d’Avennes (1807-1879).

He was born in Peronne, in the Somme, northern France, and seems to have disappeared almost without trace: there are few paintings of his accessible via the Internet, just one or two non-descript watercolours. This may be because he lived in the Somme, where the First World War destroyed so much.

The paintings listed for him in the catalogue of the First Impressionist Exhibition include a study of a peasant, a still life, and Rembrandt in his studio. He also showed a drawing of San Juan de la Rapita, in Spain.

In 1865 he started selling oil paints too, and among his customers were Pissarro, Monet, Gauguin, and Dr Gachet, who inevitably referred to him as Père Latouche. From 1868, he operated in premises in Rue Lafayette, and stopped selling paintings by 1884, concentrating on paints at the time of his death. He was also a painter himself, of landscapes and marines.

A good friend to the Impressionists, he became involved in the organisation of the First Impressionist Exhibition, and showed four works himself, none of which was given a title in the catalogue. After that group went into liquidation, he joined l’Union, organised by Meyer with Pissarro as its leading artist.

A friend of Edgar Degas, who painted his portrait (below), he took part in the Impressionist Exhibitions of 1874, 1876, 1877, and 1880. He’s understood to have been a landscape painter in Barbizon style, but I’ve been unable to locate any images of his work. He was also apparently a designer of military uniforms, and early in his career did some fashion illustration as well.

He was an accomplished painter in enamel, usually on copper but also on porcelain. He first exhibited in the Salon of 1864, and two years later was awarded a medal for his work shown there. He was an active member of the Impressionists’ company, and following its winding up after the exhibition he joined with Pissarro and others in establishing an alternative group, l’Union, in August 1875, which was structured as a trade union rather than a company.

As secretary of l’Union, he intrigued against Monet in particular. He was key in organising the group’s first exhibition, which opened on 15 February 1877 at the Grand Hôtel near the Paris Opera. However, most of the Impressionist painters who had joined the group withdrew beforehand and didn’t exhibit there. The exhibition failed to attract much attention, and his involvement with Impressionism seems to have faded.

His career in decorative arts developed, and he was appointed Professor at the École Bernard Palissy in Paris, where he rediscovered processes used by the ancient enamelers of the Limousin. He also worked for the Sèvres porcelain factory, the houses of Vever and Falize, as well as independently. He continued to exhibit his work at the Salon.

Born in Switzerland, de Molins trained with Victor Chavet in Geneva, Alexandre Calame and Charles Humbert. His work was first accepted for the Salon in 1850, and occasionally thereafter. He painted mainly country genre scenes, including hunting and animals, and landscapes in fairly realist style with some Barbizon school influence. He was well travelled, and published a book about his visit to Indonesia.

Following his involvement with the First Impressionist Exhibition, he returned to Switzerland where he became Professor of Drawing and Painting at Lausanne. A few of his paintings come up for auction since.

He was born in Granville, on the Normandy coast in Mont Saint-Michel Bay, and went to Paris, where he became friends with Cézanne, Degas, Monet and Renoir, leading to his showing paintings at the First Impressionist Exhibition, where his work received little attention and remained unsold. He therefore returned to live in Saint-Sauveur-le-Vicomte, on the west coast of the Cherbourg Peninsula, where he became well-known for his landscape paintings of the nearby valley of the Ouve (below), and of gardens.

The oldest of the group, Ottin (the father) was born in Paris, and was a pupil of David d’Angers and at the École des Beaux Arts. Although he sketched and painted, he was primarily a sculptor, and was successful in that from as early as 1836, when he won the Grand Prix de Sculpture at the Concours and the Grand Prix de Rome. He made a bust of Ingres in 1840, and numerous works in marble and in bronze.

He acted as the treasurer to the Impressionist group, and showed some of his paintings at the First Impressionist Exhibition. He doesn’t appear to have maintained any further involvement with the movement afterwards.

Galatea and Acis found out by Polyphemus the Cyclops (1866) is a statue of his in bronze with marble, forming the Médicis Fountain in the Jardin du Luxembourg, Paris.

His Campaspe taking off her clothes in front of Apelles by order of Alexander (1883) can be seen on the North façade of the Cour Carrée in the Louvre Palace, Paris.

His paintings include this view of Montmartre, Paris from 1882.

The son of Auguste-Louis-Marie Jenks Ottin (above), he was a pupil of his father, Paul Delaroche, and Horace Lecoq de Boisbaudran. His work was shown in the Salons of 1861 and 1862, but he probably had three paintings relegated to the Salon des Refusés of 1863. He specialised in stained glass, and his paintings were shown in the first and second Impressionist Exhibitions, but don’t appear to have survived. His glass was shown in the Exposition Universelle of 1878.

His work is shown in this detail from this undated cycle on the life of King Louis XI in the Notre-Dame Basilica of Cléry-Saint-André, Loiret, France.

Although there was a Swiss painter named Louis Léopold Robert who lived between 1794-1835, the exhibition clearly didn’t show his work. According to the catalogue, this Robert painted in the Barbizon area, but I’ve been unable to find any trace of another artist of this name. Hans Weevers proposes that his full name was Léon-Paul-Joseph Robert, and that he lived between 1849-1888.