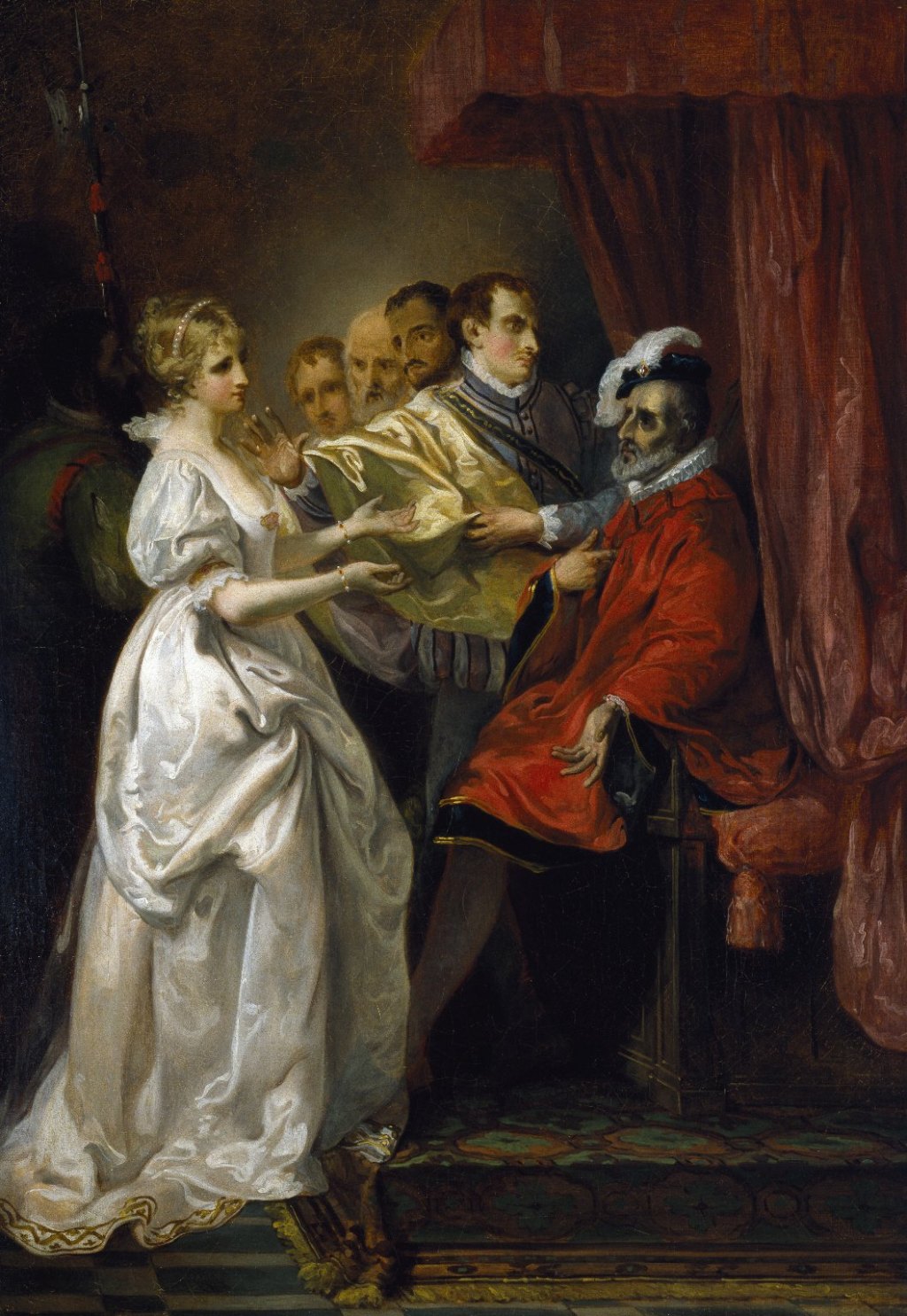 Some of William Shakespeare’s plays didn’t become popular for over four centuries. One example is All’s Well That Ends Well, normally considered to be a ‘problem comedy’ because of its inversions of the normal patterns of romantic comedy, which only became popular in the 1950s. As a result, it has been little painted, other than by those artists who specialised in depicting and illustrating Shakespeare’s works. Its plot originated in Boccaccio’s Decameron, and is thought to have been written around 1604-05.

Bertram, son of the widowed Countess of Roussillon, leaves his family to go to the dying King of France, together with his mother’s old friend Lord Lafeu. On their departure the Countess’s ward Helena, the orphaned daughter of a physician, admits her secret love for Bertram, and confesses this to the Countess. Her guardian then agrees that Helena can visit Paris to offer one of her father’s remedies to the King.

John Massey Wright’s watercolour painting of Helena and the Countess from about 1815 shows the widow seated, as Helena is leaving her to visit the King.

The King refuses to help Florence in its war with Siena, but approves the engagement of French nobles in that conflict. When Helena has been introduced to the King by Lafeu, she persuades him to try one of her late father’s medicines, and the monarch promises her the hand of anyone she wishes should it prove successful.

When Helena’s remedy restores the King’s health, he summons all his nobles for her to select her husband. She picks Bertram, who protests at her lowly rank, but the King insists that they marry immediately.

Michael Goodman’s Helena and the King from 1880 suggests the moment that she picks Bertram to be her husband, although his face remains impassive.

Francis Wheatley’s Helena and Count Bertram before the King of France, probably painted for Boydell’s Shakespeare Gallery in 1793, shows Bertram’s disdain towards Helena, who is wearing a bridal gown.

After the ceremony, Bertram reveals that he is sending Helena back to his mother without consummating their marriage, before he runs off with his companion ‘Captain’ Paroles to war in Italy. He leaves Paroles to break the news to his bride immediately before the two men depart.

While the Countess is overjoyed at Helena and Bertram’s marriage, she’s shocked to learn that her son has gone to war without its consummation. Helena arrives to be greeted by a letter from Bertram in which he imposes impossible conditions for that consummation, requiring that his wife shows him the ring he won’t remove from his finger, and bears him their son, which he won’t beget. She decides to leave, in the hope that she might persuade Bertram to return home.

In Italy, the Duke of Florence appoints Bertram as General of his cavalry.

Helena sends the Countess a letter explaining that she has left on a pilgrimage, hoping that will allow Bertram to return, although in reality she disguises herself and secretly leaves for Italy. The Countess sends her son a letter with news of Helena’s departure, hoping it will enable them both to return.

In Florence, the disguised Helena arrives at a guesthouse run by a widow, whose daughter Diana has been chased by Bertram. The two French Lords Dumaine offer to expose Paroles’ cowardice to Bertram by disguising themselves as enemy soldiers, capturing and interrogating the ‘captain’.

Helena reveals to her landlady that she is Bertram’s wife, and they plan to trap him into a secret meeting with Helena by getting Diana to accept Bertram’s advances and set up their rendezvous. Bertram then meets Diana to woo her, and agrees to come to her darkened chamber for an hour at midnight, where he unwittingly consummates his marriage with Helena. They also exchange rings, giving Helena the ring that Bertram had refused to part with, and Bertram a ring given to Helena by the King.

With the war suddenly over, the two Lords Dumaine discuss Bertram’s virtues and vices, the reported death of his wife Helena, and his seduction of Diana, before they question the blindfolded Paroles. As Bertram listens to him, Paroles reveals military secrets and denounces Bertram and the two lords. When his blindfold is removed and Paroles sees the others, he accepts that he has indeed become a laughing stock.

Without any clues from its title, Arthur Boyd Houghton’s painting of Act 4, Scene 3 of All’s Well that Ends Well from about 1860 might be challenging to read. Standing in blue under the tree is Paroles, whose red blindfold is being removed by the page behind him, while Bertram bows to acknowledge his companion’s new role as a laughing stock in front of the assembled Florentine soldiers.

They all return to France. On their way, Helena, Diana and her mother visit the King. Lafeu and Countess Roussillon, believing Helena to be dead, agree to forgive Bertram and marry him to Lafeu’s daughter, a match already approved by the King. Lafeu agrees to take Paroles as his fool.

When Bertram comes before the King, his mother and Lafeu, he claims he had disdained Helena because he had already fallen in love with Lafeu’s daughter, for whom he produces an engagement ring. But the King recognises that ring as the one he had given Helena, which Bertram had been given by the woman he thought was Diana. He is thus suspected of murdering Helena and promptly arrested.

A letter from Diana is read, in which she reveals that Bertram had promised to marry her in the event of Helena’s death. She and her mother are brought in to confront Bertram, who insists she’s but a common prostitute. But both claims are put into doubt until Diana’s mother brings in the pregnant Helena. She now meets the impossible conditions imposed by Bertram’s first letter, and Bertram is compelled to accept her as his wife. Finally the King promises Diana any husband she chooses, and concludes the play with an epilogue.

This engraving from Francis Wheatley’s original All’s Well That Ends Well Act V Scene iii (c 1794) was one of the prints accompanying Boydell’s Shakespeare Gallery. It shows the pregnant Helena holding Bertram’s letter in her right hand, and his ring in the left, with the King and Lord Lafeu at the far left, and Diana and her widowed mother behind Helena.