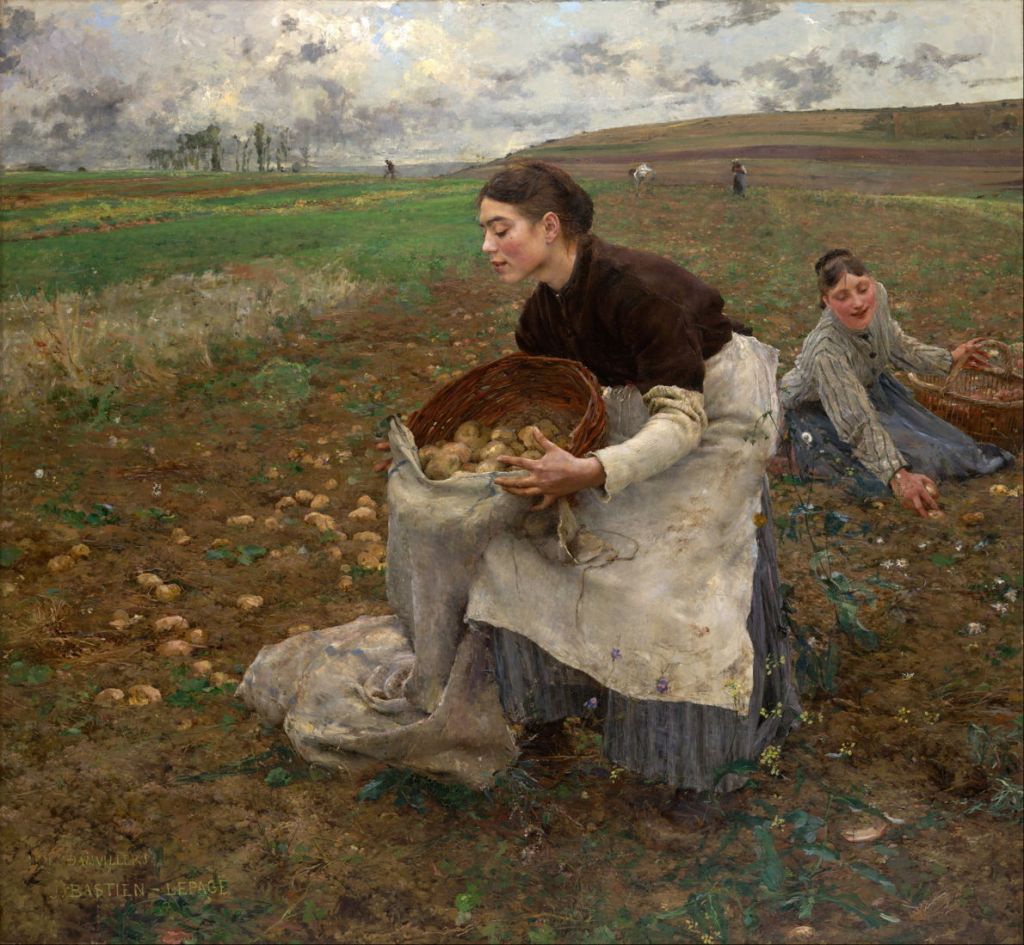 If the flower garden was the place for social gatherings and relationships, more everyday events occurred among the cabbages.

Jean-François Millet’s First Steps (c 1858) shows one of the early milestones in a child’s life, as an infant is about to break free from mother’s arms and walk for the first time towards their father’s.

The vegetable garden is also where we learn much about life, about the birds and the bees, of cabbages and kings. Aimé Perret captures this beautifully in The Lettuce Patch from 1893.

Growing vegetables successfully requires plenty of hard work. Root crops like potatoes are particularly demanding, and a staple in many diets across northern Europe.

Asai Chū’s Vegetable Garden in Spring (1889) shows a gang at work in a field at the start of the growing season. For staple root crops such as potatoes, this practice was widespread, and a popular subject for social realist artists in the middle of the nineteenth century.

During that century’s mass exodus into the cities, many left in the country were condemned to working from dawn to dusk in a back-breaking effort to save themselves from starvation. Jean-François Millet and others showed this in the harsh reality of Potato Planters from about 1861.

What was sown or planted then has to be harvested, as shown in Jules Bastien-Lepage’s October: Potato Gatherers (1878). Although there are still smiles, those potatoes were going to keep those families from starvation through the coming winter.

János Pentelei Molnár’s The Potato Harvest (1901) takes this on into the early years of the twentieth century, in Hungary.

Vegetables may be mundane, hard graft, and hardly suitable for fine art, but some artists in the more distant past incorporated them into more fantastic paintings.

Several artists have had peccadillos for particular vegetables: for Carlo Crivelli, it was cucumbers, with which he decorated his many otherwise fairly conventional paintings of the Virgin and Child.

Most remarkable of all are Giuseppe Arcimboldo’s unique portraits, here of The Vegetable Gardener (1587-90), who confirms that we really are what we eat.