As of Monterey, our working environment in macOS is a direct descendent of the original Finder in classic days. For those with large displays and many open apps, or the smaller displays of notebooks where space is always at a premium, it affords little help. For many the answer comes on multiple displays, or virtually using Spaces, both of which only buy you more space and more work.

Stage Manager takes a different approach, which you can combine with multiple displays, Mission Control and Spaces as you wish. When it’s active, each display consists of two zones: the Stage in the centre, where your active app(s) and their windows are, and a Cast at the left edge, containing other apps and their windows, poised to come on Stage whenever you want them. Apps and windows currently in the Cast aren’t inactive, and still update, so switching what’s on Stage doesn’t make you wait for those windows to be updated. 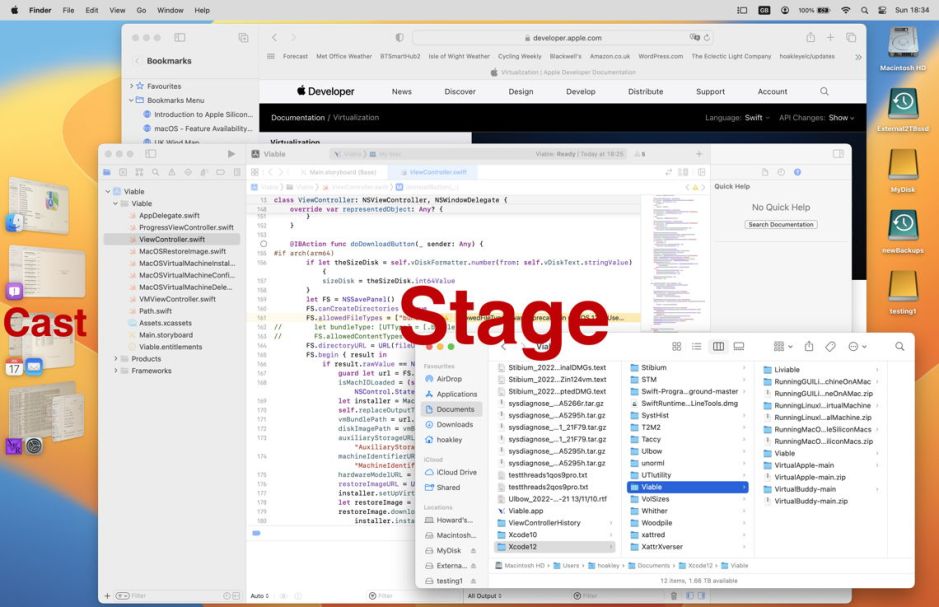 Like the Finder, the components are simple, but assemble into the more sophisticated. I’ll start with the basics: turn Stage Manager on, and open three apps, such as Safari, Mail, and a social media tool like Tweetbot (my preferred Twitter client). Open a couple of windows in the Finder too. You then end up with a single active app on Stage, and the others in the Cast at the left.

If you’re working on a large display, you may prefer to leave the Cast and Dock visible at all times; on a notebook, you’ll probably want them hidden away when not in use, to maximise usable display area. In the latter case, to reveal the Cast simply move your pointer to the left edge of the display and the Cast appears, hiding and appearing in the same way that the Dock can. This is particularly useful when working with apps that pack a lot into their windows, like Xcode.

You can bring members of the Cast on Stage using several different methods: select that item in the Cast, the app in the Dock, or a window in Mission Control. In this initial implementation of Stage Manager, there are no keystroke shortcuts; I expect that will change as it gets more use.

Members of the Cast aren’t limited to single apps or windows. To group two apps together, put one of them on Stage, then drag the other from the Cast onto the Stage. You might do that with Calendar, Notes and Reminders, perhaps, or on a larger display you could group together Xcode, Dash (the documentation browser) and Safari for your working tools. Now you can switch between groups gathered for different purposes and functions.

These groups are shown clearly in the Cast, and are thoroughly dynamic. Put the Weather app on Stage, and if you decide you want Calendar with it, just drag that from the top member of the Cast, and return it there when you’ve finished.

Set windows to show One at a time, and app and Finder windows are even more flexible, as they can be added individually to different groups. Here I’ve positioned two to make it easy to drag and AirDrop screenshots over to my iMac Pro to prepare them for this article. You can also divide separate Safari windows between two or more groups in the Cast.

On Stage is Xcode almost in full screen mode, with the Cast temporarily pulled out. The top group in the Cast contains Calendar, Contacts and a Finder window. Below that are System Settings and another Finder window, then there’s Safari open showing one of Apple’s developer documentation pages, and at the bottom of the Cast the Weather app.

This gives you a taste of what Stage Manager has in store. As with all human interface systems, it won’t appeal to everyone. What I recommend is spending a few days with it turned on, immersing yourself as much as you can. Experiment with it, learn what’s good, what’s powerful, and what doesn’t work at all well. Remember that this is the first version, and it will evolve during the lifetime of Ventura and beyond. In the end, it might not prove popular, but what I see here has the potential to transform the way we use our Macs and iPads. For me, Stage Manager alone is sufficient reason to want to upgrade to Ventura, and I can’t wait to use it in production.