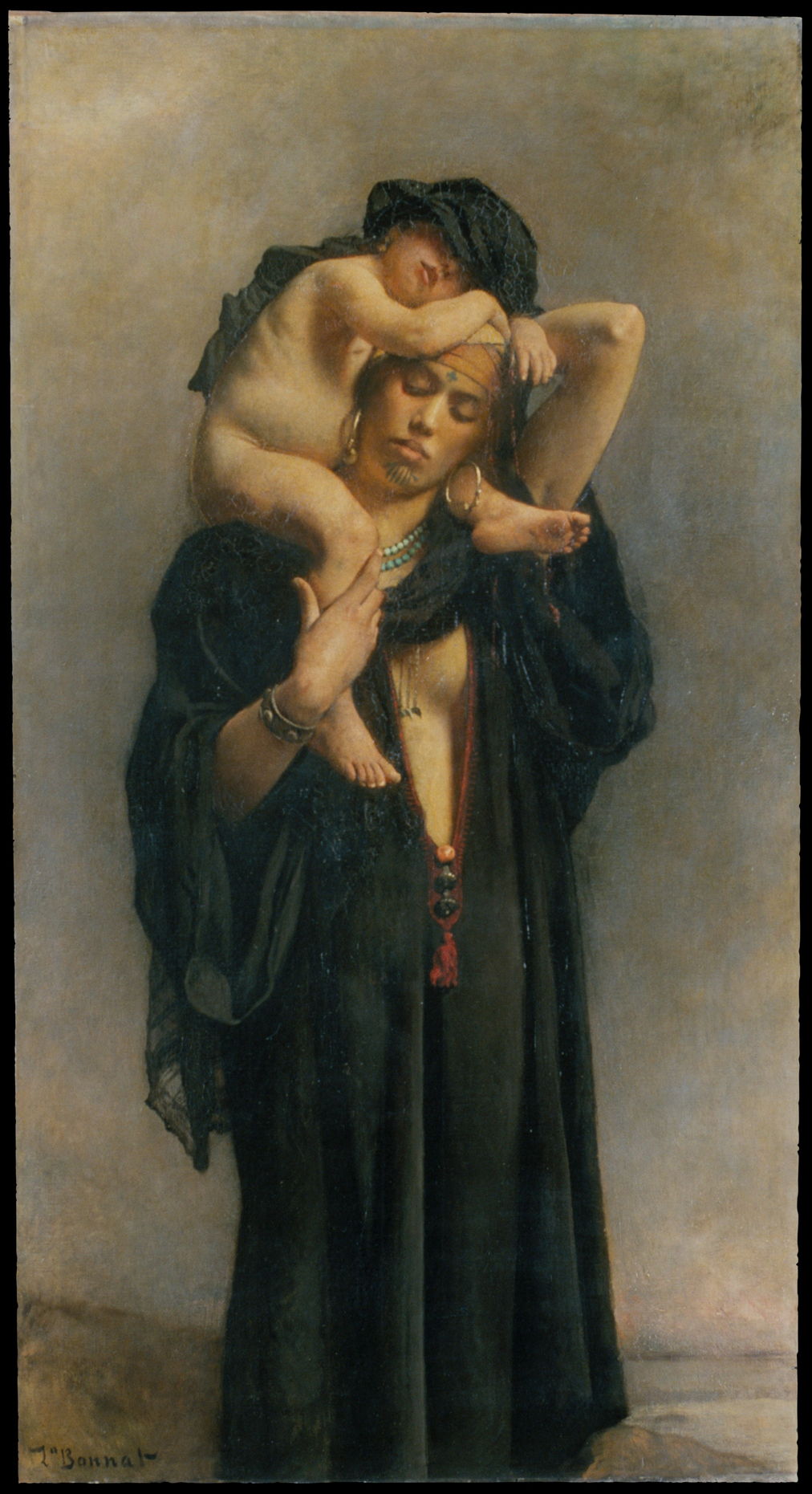 This week we have another anniversary to mark, the centenary of the death of one of the greatest teachers of painting in the nineteenth century: Léon Joseph Florentin Bonnat (1833–1922), whose pupils included Gustave Caillebotte, Thomas Eakins, PS Krøyer, Edvard Munch and John Singer Sargent. I start in this and tomorrow’s articles with a brief account of his career and art, then commemorate his death on Thursday by demonstrating his influence in teaching.

Bonnat was born in 1833 in Bayonne, France, the son of a bookseller, and spent much of his childhood in his father’s bookshop in Madrid. He started making drawn copies of engravings of the old masters, then went to train as a painter with Raimundo de Madrazo y Garreta (1841-1920), who had trained under Léon Cogniet in Paris.

Bonnat painted this delightful imagining of the artist’s youth in Giotto Tending the Goats in 1850, the year that he turned seventeen. He shows the boy scratching drawings in the ground, looking dreamily into his future. It is an amazing work for someone so young.

He moved to Paris, where he trained under Paul Delaroche and Léon Cogniet, both accomplished history painters. Cogniet had been taught by Pierre-Narcisse Guérin, whose teacher was Jean-Baptiste Regnault, so tracing Bonnat’s artistic pedigree through a chain of the greatest history painters. Bonnat entered the Prix de Rome several times, but only managed second place. Fortunately, his hopes of painting in Rome were realised by a travel award from his native Bayonne.

Bonnat’s Self-portrait from 1855 shows the artist at the age of twenty-two.

Although he painted relatively few religious works, The Raising of Lazarus from 1857 gives a good idea of his early style.

Bonnat lived and painted in Rome from 1858-60, where he was friends with Edgar Degas and Gustave Moreau.

He continued to paint fine figurative works, such as his Young Woman Paying Charity at the Entrance of the Chapel of the Hospital of San Sebastian in Cordoba from 1863. Here he contrasts the young woman dressed in her fine black clothing accompanied by those seeking alms, with the wall painting of the Trinity behind them. This work has more than an air of social realism about it too.

Bonnat continued to travel extensively in Europe. It was presumably during a visit to Italy in the mid 1860s that he saw and painted this sad and wistful young Italian Woman (c 1865).

In 1869, he was awarded a medal of honour at the Salon in Paris, establishing his reputation and career. He quickly became a sought-after portraitist, and ranked as one of the leading artists of the day. His paintings were praised by the most influential critics, including Théophile Gautier and Émile Zola.

He didn’t just paint the portraits of the rich and famous, though. An Egyptian Peasant Woman and Her Child from 1869-70 gives deep insight into the Middle East behind the exotic façade of Orientalism. This was exhibited at the Salon in 1870.

Bonnat painted The Victim in the year of the Franco-Prussian War, 1870. Although it may not be clear what she is a victim of, I suspect that this may relate to that great tragedy for France. His style may be academic in its realism, but his facture is very different from that of Bouguereau, for example, and more akin to that of Édouard Manet, who was a friend of Bonnat.

Another of his unconventional Orientalist paintings is Arabian Sheikhs in the Mountains from 1872. This is extremely painterly, with a paint surface as rough as its terrain, as shown in the detail below.

An Oriental Barbershop from the same year is rather tighter in its brushwork, and declares its ultimate descent from Regnault.