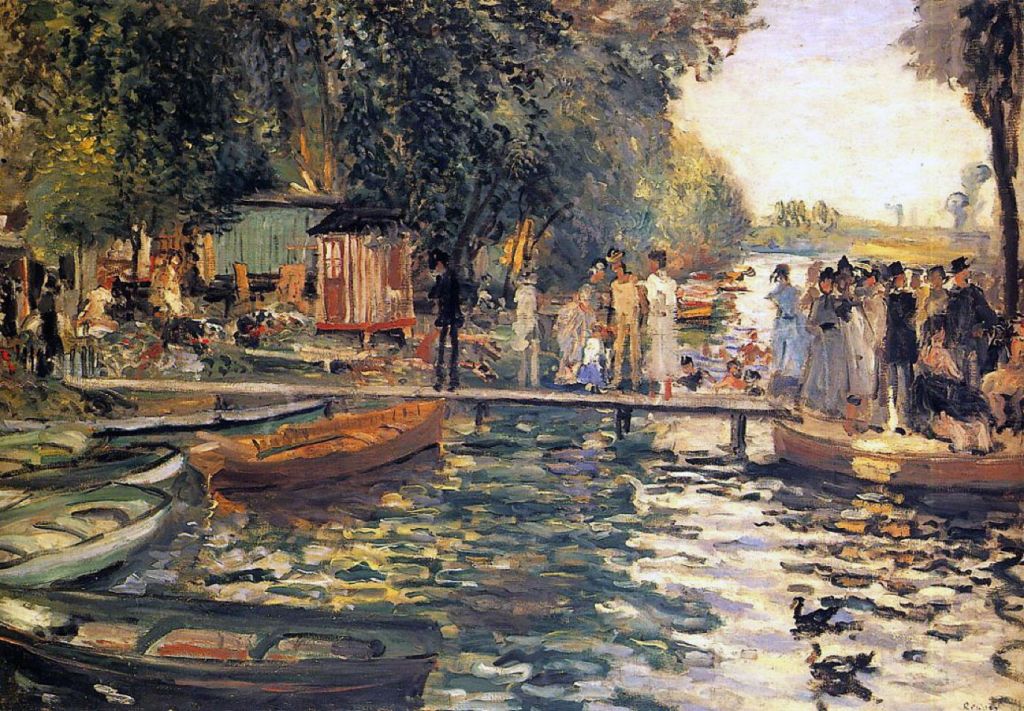 In the first of our two days cruising down the River Seine in the company of some of the finest landscape painters of the nineteenth and early twentieth centuries, we had made our way from Saint-Mammès, through the centre of Paris, to reach the island of La Grande Jatte and Asnières. Today we resume at Argenteuil, on the north-western outskirts of modern Paris.

For Gustave Caillebotte and his friends, this was the place to come to enjoy a day’s sailing, as shown in his late painting of Sailboats on the Seine at Argenteuil from 1892, just two years before his untimely death at the age of only forty-five.

Caillebotte, and Monet rather earlier, also painted the bridges, trains and barges connecting the city with the coast. This is Caillebotte’s Bridge at Argenteuil and the Seine from 1885. This features a steam paddle tug towing a laden barge towards the next bridge, which I think is the railway bridge that Claude Monet painted at least twice.

When the Monets were living in Argenteuil, and Claude was commuting into the city by train, he caught the splendour of Autumn on the Seine, Argenteuil in 1873.

During the following summer (1874), Renoir visited Argenteuil, where he painted in the company of both Monet and Manet. The Seine at Chatou (1874) is one of his more vigorously-crafted works, with a water surface similar to those being painted at the time by Sisley. Chatou is a little further downstream from Argenteuil.

Renoir’s Les Canotiers à Chatou (The Boating Party at Chatou) (1879) shows a combination of social rowing in the foreground, and two sports rowers further out in the river.

Just beyond Chatou, the river sweeps to the right in a bend with a series of long islands with popular bathing houses, among them the famous La Grenouillère.

In the summer of 1869, Renoir lived at his parents house in Louveciennes, just to the south of this bend, where the Pissarros were also renting a house. He visited the Monets, who were living near Bougival, also on that bend, and often painted alongside Claude Monet. Some of the formative moments in Impressionism if not European art occurred when Monet and Renoir visited La Grenouillère, most famously known from Monet’s painting in London’s National Gallery.

Renoir painted at least three different views of La Grenouillère that summer: that above is now in Stockholm, and that below, which is most similar to Monet’s, is in the Oskar Reinhart Collection in Switzerland; the third (not shown here) is in the Pushkin Museum in Moscow. Originally conceived as plein air sketches preparatory to more finished paintings for submission to the Salon the following year, they came to define these brilliant shimmering images formed from high chroma brushstrokes as Impressionist style.

If Impressionism has to have a single moment of birth, it’s surely in the summer of 1869 at La Grenouillère.

Alfred Sisley also painted here en plein air, as seen in The Seine at Bougival from 1872. The water surface is mirror-smooth, and Sisley has been careful to paint the reflection of the buildings with optical precision.

As the river heads north, it passes Le Port-Marly, an area which flooded badly in early 1876.

Sisley captured the consequences in a series of paintings including this Flood at Port-Marly (1876), one of his paintings exhibited at the Second Impressionist Exhibition, at the Galerie Durand-Ruel in Paris in April of that year. Although the sky is broken, it still looks like rain, as local residents take to their boats on what should have been dry land.

Having almost doubled back on itself, the Seine turns to the left in a more gradual bend at what was then the rural Herblay-sur-Seine.

Signac’s Sunset, Herblay, painted in September 1889, shows one of the wooded islands here that were praised by the writer Georges Lecomte.

The finest view of this section of the Seine valley must be Sisley’s Terrace at Saint-Germain, Spring, from 1875. It’s one of the grandest panoramic views in the Impressionist canon, caught at the perfect moment with blossom on so many of the trees.

We then pass more places with names familiar from the lives of the Impressionists, towns like Mantes, Vétheuil where Monet lived, La Roche-Guyon, and Giverny where Monet lived and painted during the later part of his life. Many of those late landscapes show the small tributary to the Seine, the River Epte.

Eventually, just downstream from Giverny, we reach the small town of Vernon, where Pierre Bonnard escaped when he was in the north of France, and painted the Blue Seine at Vernon in 1912.

The Seine then winds on until it doubles back again on a left-hand bend. To the east of that bend are the twin villages generally known as Les Andelys, long a favourite spot for landscape painters.

Signac’a Les Andelys. La Berge shows this picturesque bend on the River Seine, where the ruins of the Château Gaillard overlook the riverside houses.

The next centre of population is the city of Rouen, which straddles another of the Seine’s sweeping meanders.

It was here that Henri Rouart painted this industrial view of The Seine near Rouen (1880).

But the finest painting of the lower reaches of the Seine must be Henri Harpignies’ breathtaking watercolour View of the Seine at Rouen, which I believe shows the view from Bonsecours, to the south-east of the city, looking north-west into a summer sunset.

After a few more crazy twists and turns the Seine turns tidal as it reaches its mouth, in French the embouchure.

When Claude Monet was only four years old, his family moved to the port of Le Havre, on the north side of the embouchure, where he later started to paint. Among his early works were many showing the coast around that area, including The Mouth of the Seine, Honfleur, painted in 1865, when he was still a realist. Later, Honfleur was to be a popular spot for Impressionist painting.

Just a couple of years later, Monet painted these fishing boats in fairer conditions, on the northern side of the mouth of the River Seine, in The Beach at Sainte-Adresse (1867). In much flatter light, and with less breeze, there is less scope for the effects of his earlier work, but the evolution of his style is unmistakable.

Sainte-Adresse has been swallowed up by the port of Le Havre, where we disembark. I hope you enjoyed the trip, and the views en route.