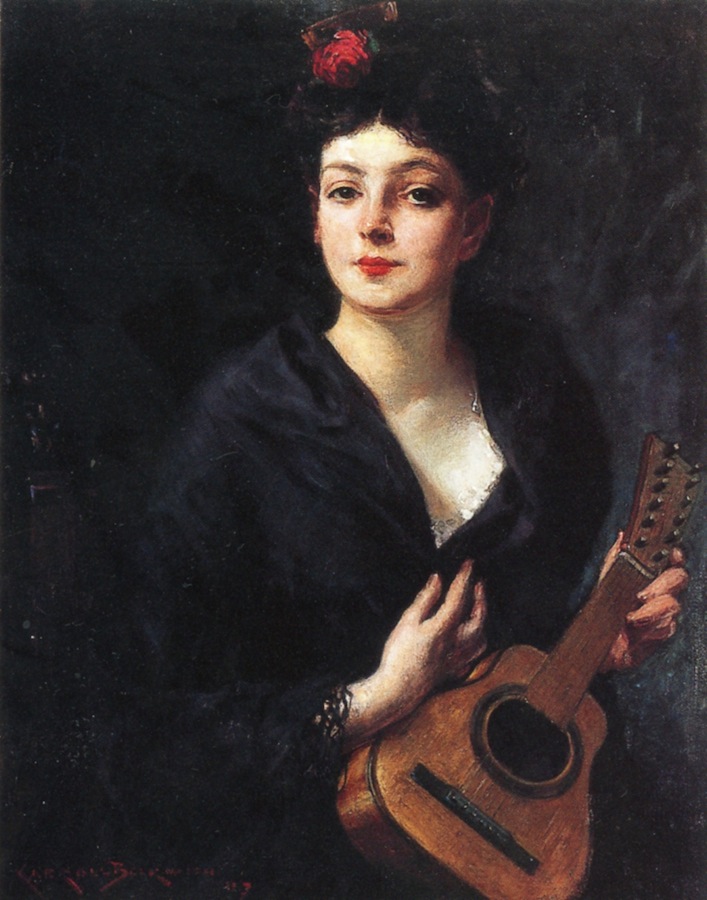 In 1901, the talented, respected and rather staid Carroll Beckwith had painted a racy portrait of the young, almost certainly too young, Evelyn Nesbit.

This shows one of the first ‘supermodels’ whose career was professionally promoted. Nesbit (1884-1967) started modelling for artists when she was only 14 years old. With her family in dire financial straits when they moved to New York City in 1900, her mother contacted Beckwith and encouraged him to employ her as a model. At this time, Beckwith’s major patron was the wealthy John Jacob Astor (who later died in the Titanic), and Mrs Nesbit was clearly chasing his money.

Beckwith’s (nearly) nude portrait of the young woman, who was no older that 17 at the time and could have been as young as 14 (her mother had a strange flexibility with her year of birth), helped launch her modelling career. Frederick Stuart Church (no relative of the landscape painter Frederic Edwin Church) also painted her scantily clad, despite Nesbit’s mother claiming that she never allowed her daughter to pose “in the altogether”.

By 1905, her face had been on most of the popular magazines of the day, was in many adverts, and she had become one of Charles Dana Gibson’s ‘Gibson Girls’. She also worked as a chorus girl on Broadway from 1901, the year that she first met the acclaimed architect Stanford White, who she later accused of drugging and raping her.

Following her marriage to Harry Kendall Thaw, the son of a Pittsburgh coal and railroad baron, on 4 April 1905, her new husband became jealous of her relationship with White. Thaw then shot White dead during a stage show in the rooftop theatre of Madison Square Garden, New York, on 25 June 1906. At the second of his two trials, Thaw pleaded temporary insanity, and was found not guilty on the grounds of insanity at the time.

Beckwith must have been eternally grateful that the insanely jealous Thaw had never taken exception to this painting.

Beckwith’s other Portrait of Evelyn Nesbit (1901) may have been more the sort of painting that the model’s mother had in mind, but sweet though it is, it would never have launched her daughter’s career.

In 1907, Beckwith seems to have been in Europe, where he painted his late portrait of the Spanish dancer Carmencita (1907).

She had been the subject of great attention by both John Singer Sargent and William Merritt Chase in 1890, when they had pursued her to paint her portrait. The three finally met on the evening of 1 April 1890 in Chase’s Tenth Street studio, where she danced for them as they sketched. Sargent painted her again in about 1905, but Beckwith didn’t catch up with her for another couple of years, when he was in Paris. His Carmencita (1907) shows an older woman, no longer dancing, but holding a guitar. The swirl and flash of her youth have faded, and in three years she was dead.

The black veil worn by the woman in his Lost in Thought (Phoebe at Onteora) (1908) implies that this resident of Onteora, in the Hudson Valley, New York State, had recently lost her husband.

Mother and Child (c 1910) is a delightful double portrait in an unusually crisp realist style for Beckwith.

The title of his New Hamburg Garden (c 1910) is another puzzle, as New Hamburg was most probably a rural township in Ontario, Canada, at the time, and Beckwith lived in Italy from 1910-14.

The Palace of the Popes and Pont d’Avignon (1911) shows the vast buildings of the Papal Palace in Avignon, France, one of the largest mediaeval Gothic structures in Europe. It was last used as a papal palace in 1370.

Deciphering the references in his richly colourful and symbolic L’Empereur (The Emperor) (1912) is also not easy. As he was in Italy then, the statue – which holds aloft the eagle of the Roman Empire – may be that of a Roman Emperor, although the initial N on its plinth more probably refers to Napoleon, whose army appears massing with its artillery in the clouds.

Evelyn Nesbit had just started her brief career as a silent movie actress, and died in 1967 at the age of 82. Harry Kendall Thaw, who had murdered Stanford White on 25 June 1906, was judged sane and released from custody in 1915, and died in 1947.