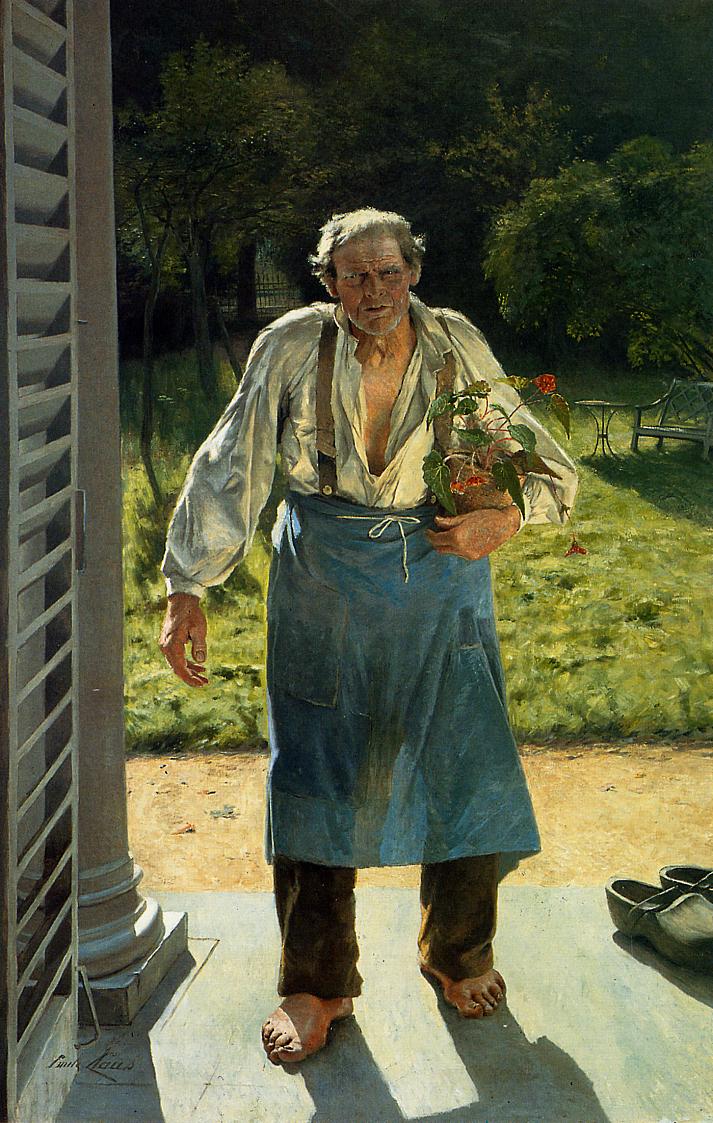 This weekend I look at a select group of paintings which show views of the world outside through open doors, short porticos, balconies, and similar. In addition to providing repoussoir framing for the view, they invite interpretation as leading the viewer to a world beyond, and introduce challenging lighting conditions. A great many paintings show the outside world through windows, but one of the important differences in each of these paintings is that those inside can walk through the opening with ease, perhaps an invitation to the viewer.

Jan van Eyck’s Madonna of Chancellor Rolin (c 1435) goes far beyond a mere doorway, with three arched openings from the indoor world of the Chancellor, the Virgin and Christ child, to a garden, city and distant countryside.

The garden is rich in objects which appear symbolic: these include rabbits, magpies, peacocks, lilies, irises, peonies, and roses, which commentators have interpreted as having various contemporary meanings. The garden is contained within a crenellated castle wall, against which two figures, their backs to the viewer, face towards the river below them; again various interpretations have been suggested for the figures.

Behind the wall, stretching into the distant haze, is a large city with its grand buildings, divided vertically by a major river. Van Eyck hasn’t spared any detail, showing a built-up island, bridge, even a boat with several occupants, and abundant reflections on the glassy calm water surface. Around the city are rolling hills with fields and small woods.

Fra Bartolomeo’s The Annunciation, from 1497, places the Archangel Gabriel and the Virgin Mary on opposing sides of an open doorway. The landscape visible through that shows a Renaissance town on a bridged river, and a prominent tree which echoes the lily being held by Gabriel. This was painted for the cathedral in the mountaintop town of Volterra, which certainly isn’t the location shown. It could instead be a stylised view of nearby Florence.

Having painted one view through a doorway early in his career, in 1511-12 Fra Bartolomeo used the device again in his Mary with Saints and Sponsor. Its sponsor was Ferry Carondelet (1473-1528), a distinguished Habsburg diplomat, who advised Margaret of Austria among others. At the time of this painting, Carondelet had recently been appointed Papal Legate to the court of Emperor Maximilian, and in 1515 he became abbot of the abbey in Montbenoît, in the far east of France.

The most obvious of the saints shown is Sebastian, impaled with arrows. Behind him is Stephen, with John the Baptist on his knees. At the far right, in his Cistercian white habit is Bernard of Clairvaux, and behind him is Saint Anthony. The sponsor is kneeling, prominent in his red vestments.

In the landscape vignette seen through the open doors there’s a baptism in progress, perhaps that of Christ himself.

When Jan Brueghel the Elder and his good friend Peter Paul Rubens painted their series The Five Senses in 1617-18, they embedded a landscape view in each. It has been suggested that these depict palaces belonging to Albert VII, Archduke of Austria, and his wife Isabella, who may have commissioned the series. However, with the exception of that in Hearing, the views don’t appear to give much location information, and may be generic in content.

Access to the world beyond is gained through triple arches with more slender pillars than those of van Eyck. Outside is a country palace amidst fields on a rolling plain, painted using a different colour balance from the interior.

Over two centuries later, Carl Gustav Carus developed the theme of framed views. When he visited Naples in about 1829-30, he stayed close to Castel dell’Ovo, which he had painted in 1828, and framed a view from sea level in his Balcony Room with a View of the Bay of Naples (via Santa Lucia and the Castel dell’Ovo).

Like his older contemporary Caspar David Friedrich (1774-1840), Carus painted thought-provoking scenes, and his framed views are likely to be symbolic, as is the string instrument propped against the side.

When Gustave Caillebotte was developing his series of views from the balconies of apartments in Paris, one of them, now the best-known, shows a man who has stepped through the open French windows into the brilliant Spring green. In his Man on a Balcony, Boulevard Haussmann from 1880, there are details of what lies between the interior and the outside world, including a trough of flowers, the ornate iron balustrade, and a colourful awning. This painting was accepted for the Salon, where it was exhibited in 1882.

Five years later in 1885, Émile Claus painted The Old Gardener entering a house from its garden. He’s clutching a potted flower and has kicked off his working clogs before stepping through the doorway from the sunlit garden. There’s even a distant echo of the doorway in the form of a gate, above his shoulder, which draws the viewer even deeper into the painting and on to the world beyond.

This was exhibited in the same year at the Antwerp Salon, and in Brussels two years later, where his work was compared favourably with that of Jules Bastien-Lepage.