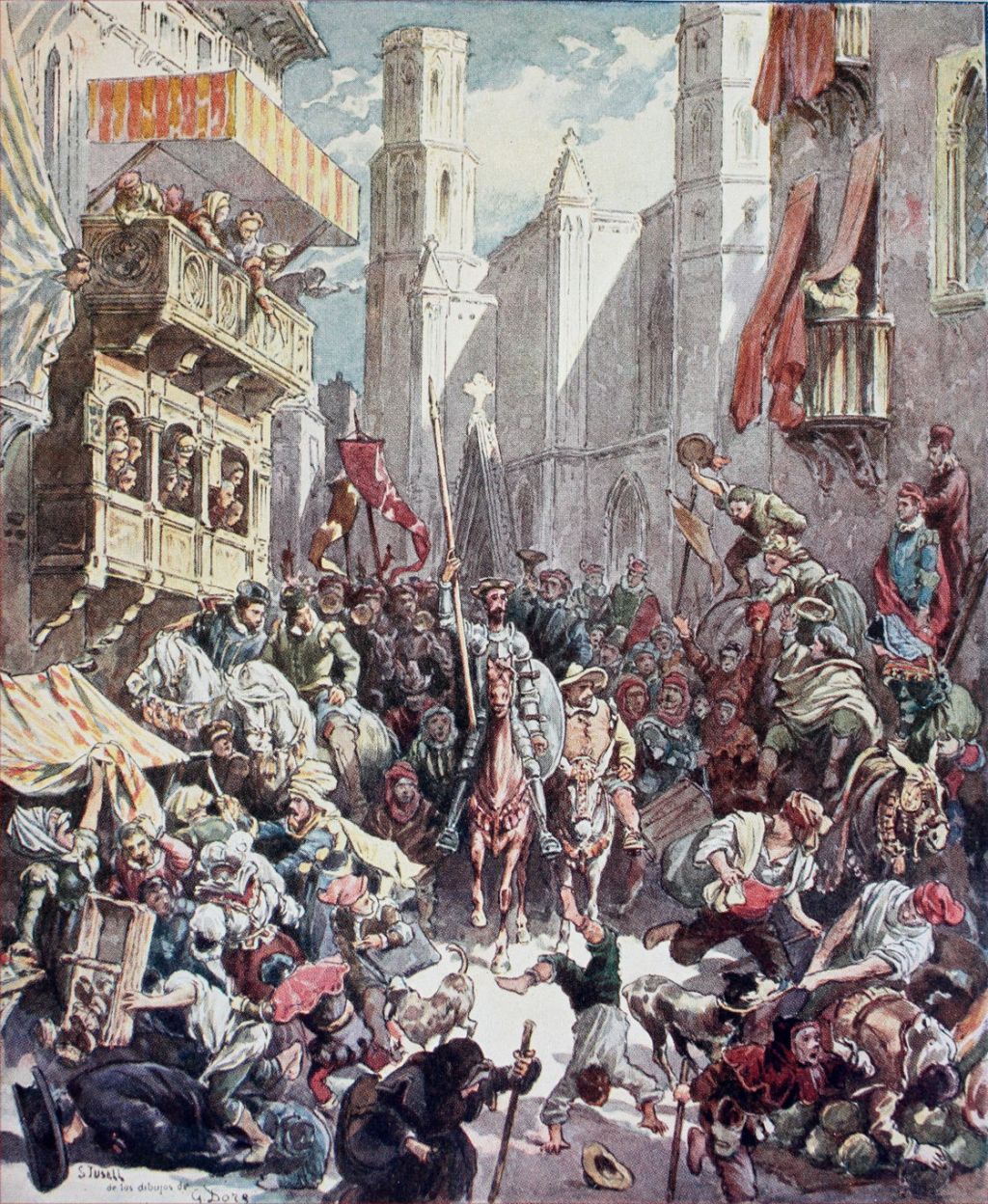 In the previous episode, Don Quixote and Sancho Panza rode away from the Duke’s palace, and first came across farmers carrying wood carvings for their village altarpiece. Next they met two young women and a brother who were creating a new Arcadia in the woods. After lunching with them, the pair put themselves in the middle of the road just as a herd of bulls were being driven along it. As the knight refused to move, he and Sancho were trampled by them. They washed off the dust in a spring, where they ate again before travelling on to an inn. In spite of offering them whatever they wanted, the innkeeper could only provide them some grim cow-heel stew. They overheard two men in the next room discussing the second book about Don Quixote. When the knight told them he was next door, they came round and invited them to dine with them on better fare. Their discussion of what was recorded in the book deterred Don Quixote from going on to Saragossa, so the following morning the pair headed for Barcelona instead.

For the next week, as Don Quixote and Sancho Panza pursued the most direct route to Barcelona avoiding Saragossa, little else happened. After his squire had fallen asleep one night, Don Quixote’s imagination wandered through the Cave of Montesinos, the lady Dulncinea, and his squire’s penance imposed by Merlin. He determined to help Sancho attain his goal of three thousand lashes, so started to remove the man’s breeches so that he could lash him with Rocinante’s reins.

That woke Sancho, who knocked his master to the ground and pinned him there until the knight promised to leave him alone. The squire got up and walked under a nearby tree, where he felt a pair of feet hanging in the air. He walked briskly on to another tree, only to find another pair of dangling feet, and again by a third tree. Don Quixote came over to his squire’s screaming and explained that they were only the hanged bodies of outlaws. From that he concluded that they were nearing Barcelona.

As they were about to leave the following dawn, they were immediately surrounded by forty-five bandits, who told them to stay where they were until their captain arrived. The men ransacked their bags, but fortunately Sancho had tucked the money he had been given into a waist-pouch. Just as the bandits were about to frisk him, their captain arrived and told them to stop. The chief introduced himself as Roque Guinart, and quickly recognised Don Quixote’s madness.

Suddenly a young woman, daughter of a friend of Roque, rode up and told them her story of being jilted by a man, who she had shot and left surrounded by his servants. Roque promised to help sort that out, but Don Quixote told him that he’d find the man and, dead or alive, force him to marry the woman. Roque ignored that, and rode off to look for the man who had been shot.

Her victim was in his last throes, but had breath enough to explain that he hadn’t been on his way to marry another woman. She fainted away as he died in her arms. When she came to and saw that he was dead, she rent her clothes and tore her hair in grief. Roque directed the dead man’s servants to return his body to his father. The woman declared that she would live the rest of her life in a convent, and rode away.

Roque told his men to return all Don Quixote and Sancho Panza’s possessions, then shared out the rest of their spoils equally. With a crowd of people approaching them on the road, Roque dispatched his men to bring them to him.

Roque and Don Quixote talked until the bandits arrived with their next victims. They included two Spanish infantry captains travelling to embark on galleys, pilgrims headed for Rome, and a judge’s wife in a coach. Roque relieved them of what he assessed as a fair share of their money, and gave them passes of safe conduct to ensure that no one would rob them a second time.

Roque then wrote a letter to a friend in Barcelona, telling him that the knight and his squire were on their way into the city, and how their presence would delight everyone. He sent the letter ahead in the care of one of his squires.

For the next three days, Don Quixote and Sancho Panza stayed with Roque and his outlaws before they, with half a dozen of Roque’s squires, entered Barcelona and reached its beach on Saint John’s Eve [23 June]. After embracing them both, Roque left them waiting for first light.

This was the first time the pair had seen the vastness of the sea, and as they sat bewildered on their mounts, Roque’s friend came up and welcomed them to the city.

When the pair were riding through the crowd into the city, two boys sneaked up and thrust gorse under the tail of their mounts, causing them to buck until they had thrown the knight and his squire to the ground. Once they had removed the prickles from their mounts, they remounted and rode on to the house of Roque’s friend.

That completes the sixty-first chapter of the second book of Don Quixote.