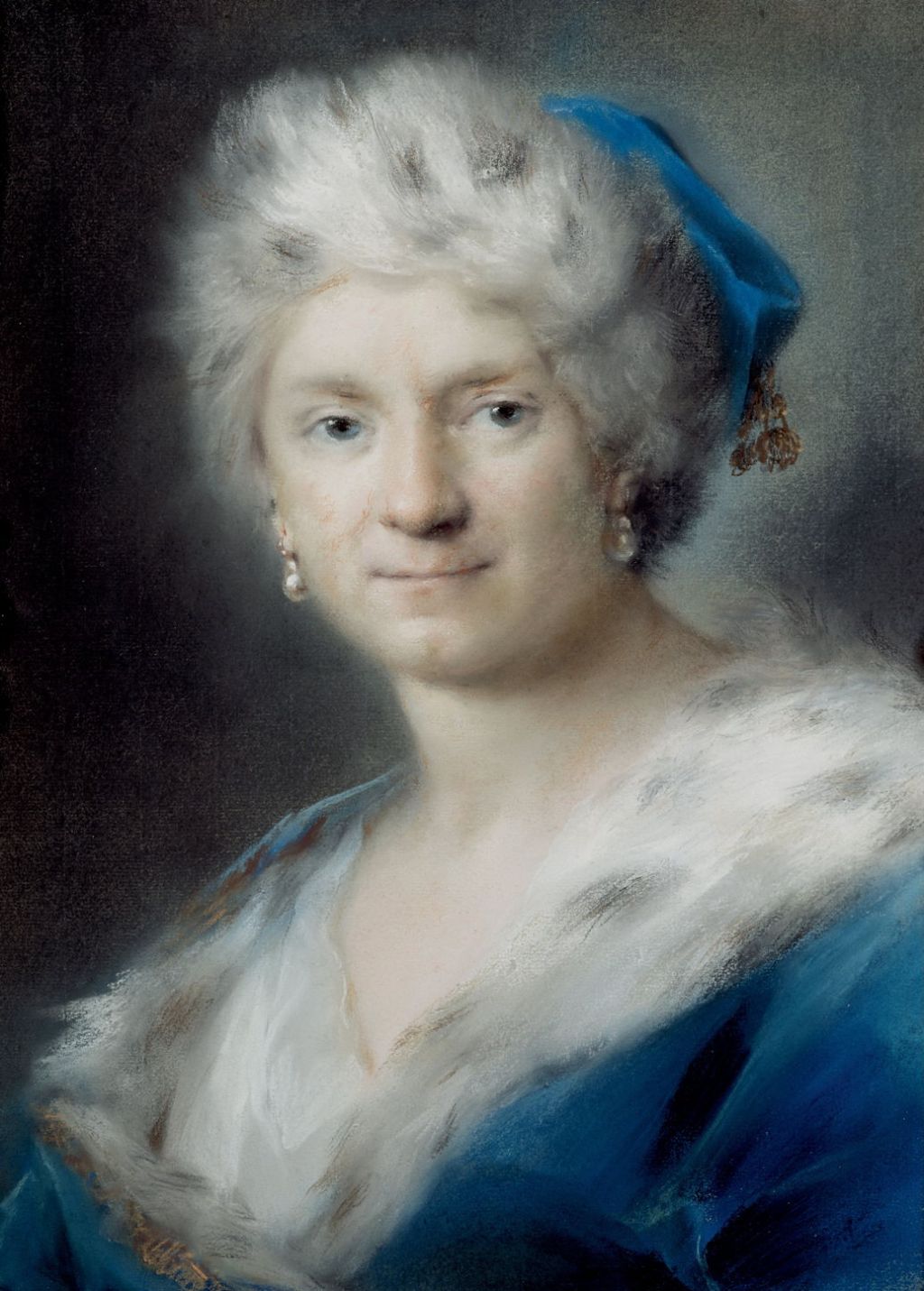 In the first of these two articles looking at some of the very few women painters who defied all odds and were successful before the nineteenth century, I left with the most famous Artemisia Gentileschi (1593–1653). During that period, in the Dutch Golden Age, Judith Leyster (1609–1660) established her reputation.

Leyster is another exception to the rule that women painters came from painting families. Almost nothing is known of her training, but her father was a local brewer and clothmaker who went bankrupt. It has been speculated that she started to paint professionally to bring money into the household. By her early twenties, she was a member of the Haarlem Guild of Saint Luke, possibly its first woman, and marking her as a master in her own right. She then married Jan Miense Molenaer, another established master.

Like most of her surviving paintings, A Game of Tric-Trac was made before her marriage, in this case in 1630. Whether this is because she worked with her husband, giving him the credit, isn’t known. Tragically, after her death at the age of only fifty, she was completely forgotten and all her paintings were attributed to Frans Hals or her husband.

Returning to Italy, my next great woman painter is Elisabetta Sirani (1638–1665), the oldest child of the Bolognese painter Giovanni Andrea Sirani (1610–1670), who had been a pupil of Guido Reni (1575–1642). She was running the family workshop by the time she was only seventeen. Her success was meteoric until she collapsed and died suddenly in August 1665, aged twenty-seven, and has since lapsed into obscurity.

Sirani’s Penitent Magdalene is a powerful painting which uses a wide tonal scale to heighten its emotive effect.

Her Portia Wounding her Thigh (1664) refers not to the Portia of Shakespeare’s play The Merchant of Venice, but to Portia or Porcia Catonis, wife of Marcus Junius Brutus, one of Julius Caesar’s assassins in 44 BCE.

Getting wind of the plot to murder Caesar, Portia asked Brutus what was wrong. He didn’t answer, fearing that she might reveal any secret under torture. She therefore inflicted wounds to her thigh using a barber’s knife to see if she could endure the pain. As she overcame the pain of her wounds, she declared to Brutus that she had found that her body could keep silence, and implored him to tell her. When he saw her wounds, Brutus confided all in her.

This is a most unusual story for a painting, but singularly appropriate for such a talented young woman achieving success in her artistic career.

By August 1665, she had completed nearly 200 paintings, many fine drawings, and various prints. She died so suddenly that it was at first suspected that she might have been murdered. It transpired, though, that she had suffered fulminating peritonitis as the result of a burst peptic ulcer. The Sirani workshop had lost its leader, and her many young female students their teacher. Her hopes of a new generation of brilliant women painters in Bologna were dashed.

A few women also started to have more self-determination. Among them was the remarkable Maria Sibylla Merian (1647–1717), who was not only an accomplished painter, but a pioneering biologist, explorer and illustrator.

She came from an artistic family: her father was an engraver and publisher, and after his death when she was still a toddler, her mother married Jacob Marrel (1613/1614–1681), who painted floral and other still lifes. She was trained as a child, and was painting her first insects by the age of thirteen. She started with silkworms in her home town of Frankfurt in Germany. She married her father’s apprentice when she was eighteen, and the couple had their first child in 1668, after which they moved to her husband’s home town of Nuremberg, where she started teaching young women to paint.

Merian appears to have made paintings intended as fine art in their own right, including this Still Life with Fruit, a Grasshopper and a Butterfly which she’s thought to have painted during the 1670s. There’s no sign yet of any insect lifecycles, metamorphoses or insect-plant relationships, which were to develop shortly. Then at the age of fifty-two, she set sail for Suriname in South America with her daughter, on a mission to paint the insects of the Dutch colony, in particular the relationships between insects and their food plants, and their lifecycles.

Before she left the Netherlands, Merian had studied several large collections of insects and plants from Suriname. She realised that, in almost every case, there was no knowledge of their different stages, an area which she intended to study and paint during the years that she was to be there. In June 1701, her stay was curtailed when she suffered malaria, and she returned to Amsterdam to recover. Then in 1705, she published her masterwork, the fruit of her studies in the tropical heat: Metamorphosis insectorum Surinamensium, the lifecycles and metamorphoses of insects of Suriname.

Her watercolour Plant Study with Peppers from 1701-05 was, as usual for her, painted on vellum. This shows an Indian pepper plant, with all four stages in the lifecycle of the moth which lives with and from it: the eggs are seen inside a fruit at the right, the caterpillar at the foot, a pupa at the left (on the green pepper), and the adult moth above.

Until well into the nineteenth century, women who learned to paint were discouraged from using oils. As a result, many became fine watercolourists, and when pastels were becoming established as a fine art medium, women were among the leaders. One of the most brilliant of the first big wave of pastellists was Rosalba Carriera (1675–1757), whose work demonstrated that a good pastel painter could match the accomplishments of the best oil painters of the day.

In the fingers of a skilled pastellist, materials which had long challenged painters in oils, like hair and fur, became great strengths. Carriera’s superb Self-Portrait as ‘Winter’ from 1730-31 is a fine example.

The Royal Academy of Arts in London hasn’t been known for its support of women or radical tendencies. Yet when it was formed in 1768, two of its thirty-four founding artists were women: Angelica Kauffmann (1741-1807) and Mary Moser (1744–1819).

Kauffmann was born in Switzerland and brought up in Austria. When she was travelling in Italy, she was invited by the British ambassador’s wife to come to London, where she arrived in about 1765, and soon became a hugely popular portraitist and painter of history.

Her Penelope Awoken by Eurykleia from 1772 shows how each night Odysseus’ nurse would wake Penelope up so that she could continue her subterfuge of unpicking her weaving of the burial shroud for her father-in-law.

Moser has been all but forgotten today, and her paintings have almost vanished, despite her eminent career. She was the daughter of another Swiss-born artist, but was born in London. She benefitted from precocious talent and the early training by her father, resulting in winning her first medal from the Society of Arts when she was only fourteen. She is recorded to have exhibited floral paintings and a few history paintings at the Society of Artists of Great Britain in the following years. After the formation of the Royal Academy, she took an active role in its proceedings in subsequent years.

The Royal Academy holds just two paintings of hers, both donated by the artist. This is Spring from about 1780.

Just as women were often confined to watercolours and pastel media, so men determined what they could paint. With the decline of guilds and family-run workshops, and the rise of academies, women were normally forbidden from painting nude figures from life, which rendered figurative genres inaccessible to them. They were, though, allowed to paint still lifes, particularly flowers, and landscapes, which just happened to be ranked lowest among the genres. Portraits, especially of children, were also deemed suitably ‘feminine’.

In the late eighteenth century, a new artist took the lead in painting still lifes: Anne Vallayer-Coster (1744–1818). She had the great advantage that her father was involved with the Gobelins tapestry business, and was able to teach her to paint. She seems to have been mentored by other women artists, and at one time by Joseph Vernet, and her great talent and skills brought her membership of the Académie Royale in 1770. But without training in life classes, or a proper apprenticeship, she too was limited to painting portraits and still lifes.

She reached her zenith in brilliant displays such as A Still Life of Mackerel, Glassware, a Loaf of Bread and Lemons on a Table with a White Cloth from 1787.

She was fortunate to escape the French Revolution two years later, but her strong associations with the monarchy and aristocracy were severed. She appears to have concentrated more on floral arrangements in those later years of her career as a result.

At the same time, one of the leading pastellist was Louise Élisabeth Vigée Le Brun (1755–1842). She too had been brought up with art, although this time less directly. Her father was a painter in pastels who specialised in portraiture, and she followed in his footsteps, painting professionally in her teens. She married a painter and art dealer who was related to Charles Le Brun, but her big break came when Marie Antoinette became one of her patrons, and enabled her admission to the Académie Royale in 1783.

Her simple portrait of a baby from about 1790 takes up from where Carriera had made her mark: this infant’s face is softly rendered, but their clothes are sketched in a loose style which was far in advance of paintings of the day.

She probably painted that when she was in exile in Italy during the French Revolution. She travelled on to Austria, Russia and Germany before returning to France in 1802, where this account ends.