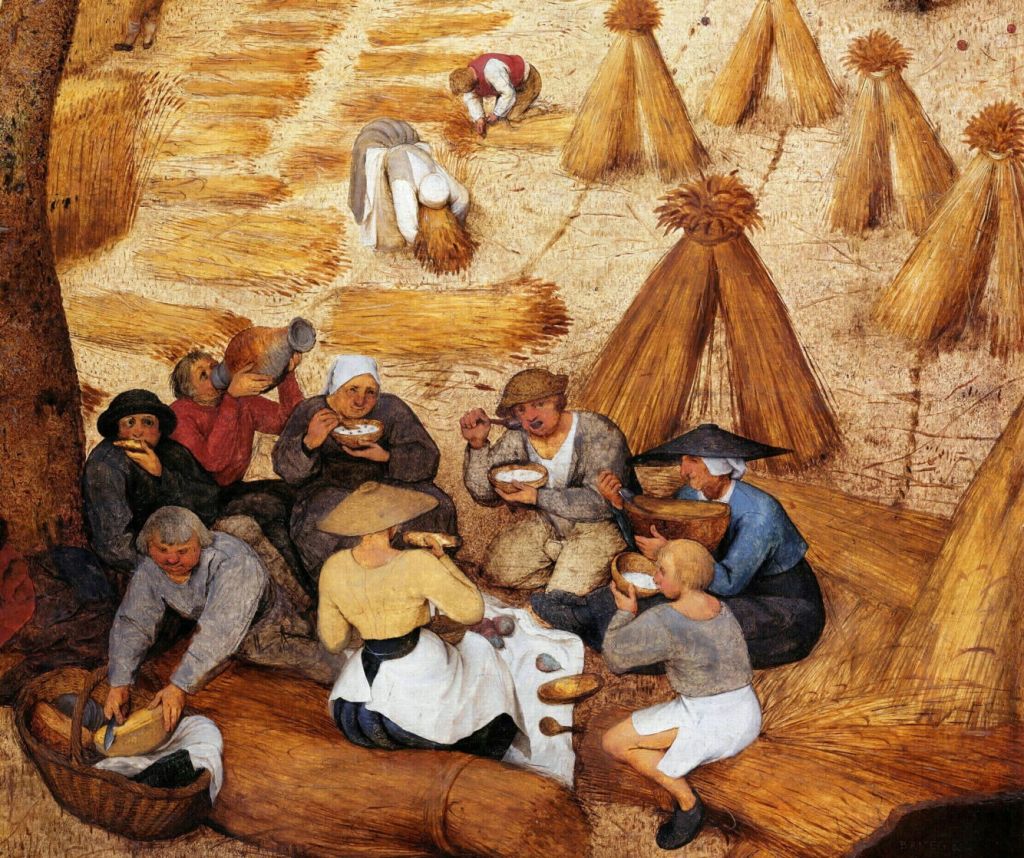 If there’s one thing we all remember from school it must be the water cycle, that diagram showing how rain comes from clouds, which come from the sea, which is fed by the rivers. Or, as John Evans and Howard Periman put it so eloquently for the USGS.

In this article, I look at one of the first such explanatory diagrams which uses multiple linked stories to simultaneously paint its narrative: Pieter Bruegel the Elder’s The Harvesters (1565).

Bruegel had already used complex visual narrative in earlier paintings, some of which I will examine in future articles in this series. In this case, he set a trend which continues today among visual artists, particularly those illustrating complex systems.

The harvest process starts at 1 with reaping, cutting of the ripe cereal crop, then performed using scythes. This is arduous work, and in the heat of summer requires rest breaks, shown at 2, in which the workers cooled off and replaced fluid lost as sweat. The cut cereal is then assembled into sheaves, which are stacked in stooks to dry at 3, before they’re carried away at 4.

Sheaves are put onto a cart, which moves them in bulk at 5, down to the village at 6. There they would normally be threshed to separate the edible grain from the straw, before further transport at 7 down to the coast at 8, where boats and ships transport the grain to mills to be ground into flour for making into bread.

The reapers are shown cutting the cereal close to the base of the stem, to ensure the best yield of straw as well as grain. A third man is coming up with two large flagons of fluid to refresh them.

Harvesting involved the hard labour of everyone who was able. Bruegel here completes the cycle, showing these workers eating bread which had been baked from flour ground from cereal grown in the same fields. In the background, cut cereal is tied into sheaves to make it easier to handle.

The first part of the journey to the village is to be carried; in many fields, once the harvest has progressed far enough, carts are brought closer to where the cereal is being cut. Sheaves are then loaded onto a cart towed by two oxen, not horses, and moved down to the village.

In the village, those too old or infirm to be out in the fields are entertaining those too young. Interesting omissions by Bruegel are the processes of threshing followed by winnowing, to separate edible grain from the chaff and straw.

Grain, and probably some of the straw, are then transported by cart to the town, with its mills and port.

Boats and ships then take the grain or flour away to the towns and cities, where it feeds the people.

The Harvesters is one of a cycle of six, or possibly more, paintings made by Bruegel in 1565 showing different times of the year. These were made for a merchant banker, Nicolaes Jonghelinck, in Antwerp, who hung them in his dining room. By 1594, they were owned by the city of Antwerp, which gave them to Archduke Ernst, then Governor of the Netherlands. One had become separated by the time the remaining five were passed to Archduke Leopold Wilhelm.

Another painting in the cycle shows The Hay Harvest using a similar technique.

Bruegel not only told the story of the cereal harvest, stressing the importance of the ordinary labourer, but set all these threads in one of the first modern landscapes. It’s a masterpiece of art and narrative, told in a way that’s only possible in visual art.