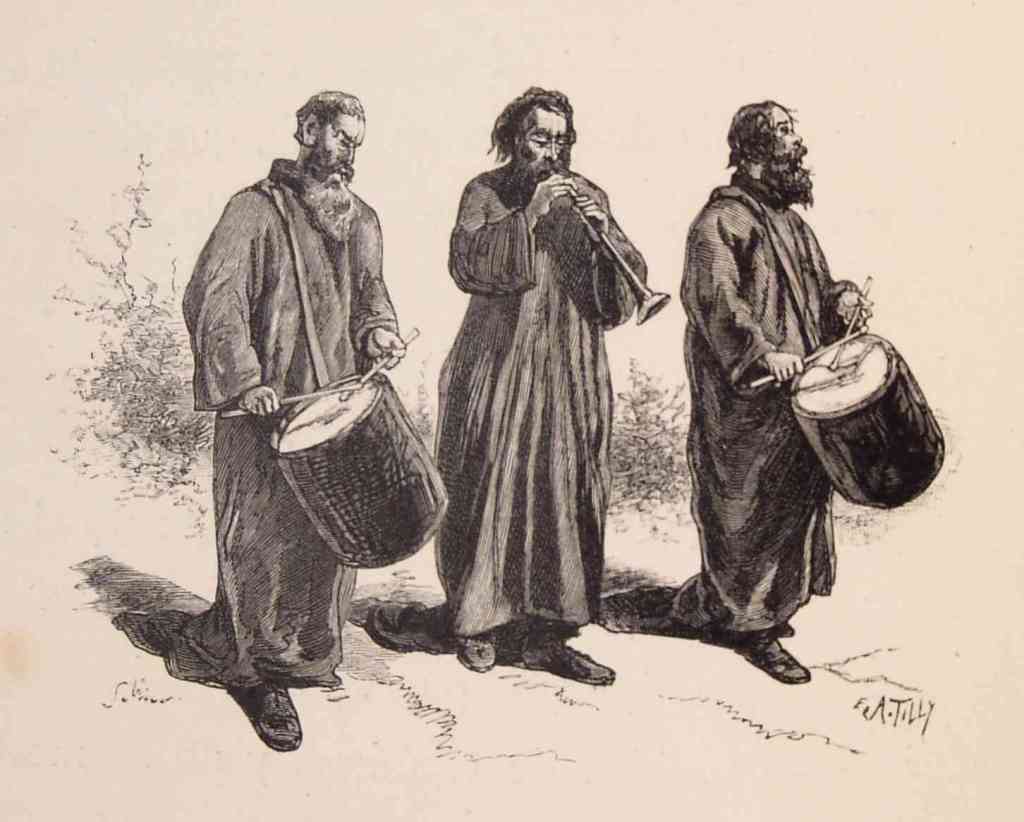 In the previous episode, Don Quixote and Sancho Panza were taken out hunting by the Duke and Duchess. The party met with quick success in the form of a wild boar, but Sancho Panza climbed a tree in fright, and was suspended from a branch when he fell. The rest had killed the boar, so they retired to take lunch. After dark, the wood came alive with fires and sounds of Moors in battle. A messenger announced they would be told how to disenchant the lady Dulcinea, and later a succession of three ox carts came to them, followed by a chariot carrying Merlin and a young maiden. The wizard told Sancho that, to disenchant the lady, he had to lash himself three thousand three hundred times on the bare buttocks. Although Sancho resisted, he finally agreed just before dawn, and the party returned to the castle of the Duke and Duchess, their first trick proving highly successful.

The Duke’s butler had played the part of Merlin in that charade, and he was preparing the next with aid of the Duke and Duchess. The following day the Duchess asked Sancho whether he’d started his penance, to which the squire replied that he’d only managed five smacks with his hand. She told him that wouldn’t do, and he’d have to use a scourge or cat-o-nine-tails to satisfy Merlin’s requirements, so she promised to provide him with something more suitable the next day.

Sancho asked her to read through a letter he’d been preparing to send to his wife. As the squire couldn’t read or write, and could barely sign his name, she read this carefully for him. In it, he told his wife that she was going to be the wife of a governor, and that he was sending her the green hunting suit for her to make into a skirt and bodices for their daughter. He went on to explain how he agreed to give himself the three thousand three hundred lashes so that he would be made a governor, and how profitable that governorship would be.

The Duchess corrected him over the governorship, reminding him that the promise had been made before any lashes were required, and expressed her concern over his covetousness. She told Sancho that she wanted the Duke to read his letter too. When they lunched in the garden, the Duke also found Sancho’s letter very amusing.

After lunch, the squire entertained them with his talk, before they were interrupted by dismal martial music, which once again threw the knight and his squire into confusion. Two drummers entered the garden, followed by a fife player and a huge man veiled and dressed in black bearing a large scimitar.

The latter paced slowly to the doleful beat of the drums. After he had knelt before the Duke he removed his veil, revealing a long, thick white beard.

The man introduced himself as Trifaldin of the White Beard, squire to the Countess of Trifaldi, who was also known as the Dolorous Duenna. He passed on her plea to be allowed to tell the Duke of her plight, and to meet the famous knight Don Quixote. The Duke agreed to this with great formality, and Trifaldin and the musicians went to fetch the Countess forthwith. While they waited for her, Don Quixote agreed to hear the Countess’s request.

Sancho, though, expressed his concerns, saying that nothing good could ever come of any involvement with a duenna. His master disagreed, as did one of the duennas of the household, who took the opportunity to express her distrust of squires in return. Their discussion was interrupted when they heard the the doleful musicians returning with the Countess. Sancho suggested to the Duke that he should go to meet her as a Countess, but stay where he is for a duenna. The Duke said that he’d see what she was like before deciding the level of courtesy to show to her.

The musicians then reappeared.

That completes the thirty-seventh chapter of the second book of Don Quixote.