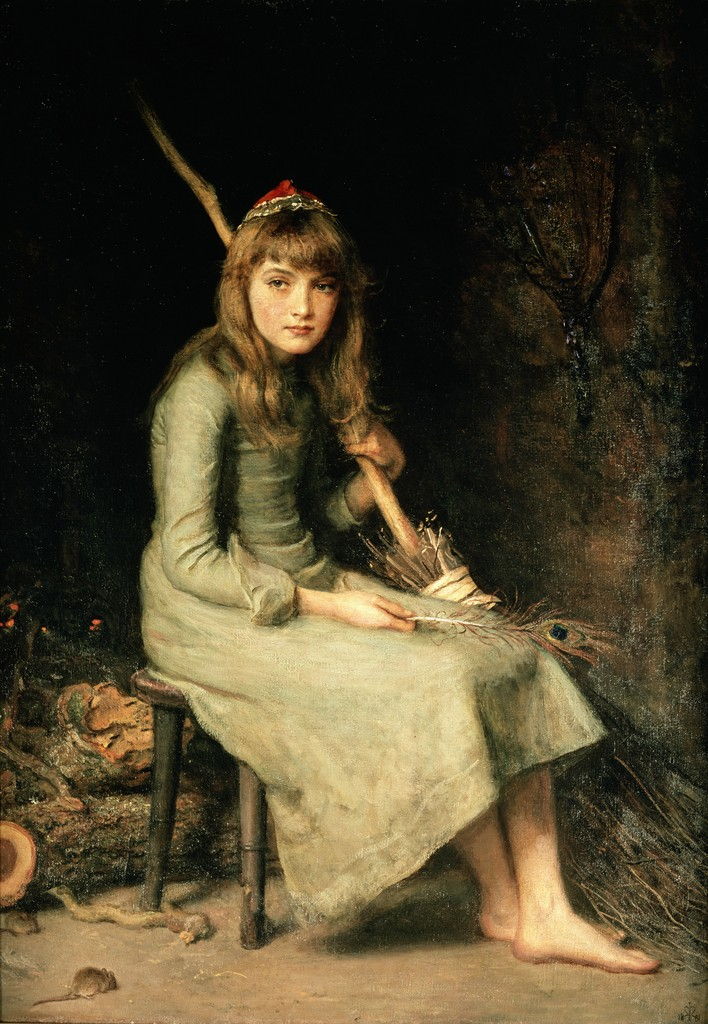 In this series looking at how characters in stories are portrayed, in the context of Christopher Booker’s analysis of literary narratives into The Seven Basic Plots, I have reached the second of his plots: Rags to Riches.

This category became particularly popular with increasing literacy during the nineteenth century, and has only limited examples from earlier stories. Booker cites the Old Testament story of Joseph as an example, although I remain unconvinced that this is appropriate given the fact that Joseph was the son of the patriarch Jacob, and hardly born into abject poverty. Notable by their absence are myths or legends of classical Greece and Rome, which is unfortunate given their popularity in paintings.

Prior to the nineteenth century, the best literary examples are probably the story of Cinderella, perhaps that of Robin Hood, and Aladdin. I have been unable to find any paintings to consider for the last of those.

This was first published in Italy, but is well-known throughout Europe.

A widow with two vain and selfish daughters marries a widower with one good and beautiful daughter. The two vain daughters oppress their good step-sister, who is given all the chores to do and thus becomes known as Cinderella. One day the Prince invites all the young ladies to a ball, so that he can choose a wife from among them. The two vain daughters plan and prepare, intending that Cinderella should not go.

After they have left for the ball, Cinderella sits crying, and her Fairy Godmother appears. The latter turns a pumpkin into a golden carriage, mice into horses to draw it, and Cinderella’s rags into a ball gown with glass slippers. Her Fairy Godmother warns Cinderella that these changes are only temporary, and that she has to return by midnight, when her carriage, etc., will return to their original objects.

Cinderella then goes to the ball, and wins the Prince and his entire court over. As she rushes away just before midnight, she drops one of her glass slippers. The Prince finds the slipper, and launches a search to discover whose it is, so that he can marry her. When he visits the vain sisters it does not fit them, but fits Cinderella, who later marries the Prince and lives happily ever after. There are also variants in which the glass slipper is lost at a second ball, not the first.

After extensive search, I have found five ‘fine art’ paintings depicting this story, one of which (by Val Prinsep) is of too poor quality for inclusion.

Jean-Antoine Laurent’s Cinderella: a Perfect Match, from 1818, shows the three sisters during the slipper-fitting for the prince after the ball. Although it’s not easy to tell them apart, it’s Cinderella, with her plain clothes, who has just shown how her foot is a perfect fit. This painting was shown at the Salon of 1819.

Thomas Sully’s Cinderella at the Kitchen Fire (1843) is weaker in its narrative, and gives no clear indication as to whether this scene shows the two vain daughters preparing themselves for the ball, or they are waiting for the prince to visit to get them to try on the glass slipper. Cinderella’s right foot pokes out by the pots and pans at the left, drawing attention, but her other foot isn’t visible.

Edward Burne-Jones shows Cinderella reverted to her plain clothes after the ball, but still wearing one (the left) glass slipper. She is seen in a scullery or similar area, with a dull, patched, and grubby working dress and apron. Other than the glass slipper, there is one further cue to the previous ball: a single pale pink rose to the right of her head. She is staring wistfully into the distance, her right hand holding her hair, her left raising the apron.

John Everett Millais’ version is very different. A much younger girl, Cinderella is sat in her working dress, clutching a broomstick with her left hand, and with a peacock feather in her right. She also has a wistful expression, staring into the distance almost – but not quite – in the direction of the viewer. The only other cue to the narrative is a mouse, seen at the bottom left of the painting.

Cinderella wears a small red skull-cap which could be an odd part of her ball outfit, but her feet are bare, and there is no sign of any glass slipper. It is thus impossible to decide which part of the narrative he is showing us, and it would be easy to assume that this was simply a portrait of a kitchen waif, not part of the Cinderella narrative.

The tales of Robin Hood are claimed to date back to around 1200, with the hero dying, by popular account, in 1247. Earliest surviving written accounts are from around 1500, in a series of lengthy ballads which were first printed in Antwerp, and by Wynkyn de Worde in London.

They centre on Robert of Locksley, who lived on the edge of Sherwood Forest near Nottingham, England, and was dispossessed of his farm and made an outlaw. Under his nickname of Robin Hood, he assembled a group of friends who became known as his Merry Men, who lived in the forest preying on the many ‘bad’ and despotic landowners and nobles, for the benefit of the oppressed poor. His trademark skills were woodcraft and supreme accuracy with the longbow. Among the friends he defended against attack was Maid Marian, whom he married.

Robin Hood has been the subject of many illustrated books from 1500 onwards, although I show here just three which at least have roots in paintings. He has featured in at least thirty movies, been played by Errol Flynn (1938) and by Sean Connery with Audrey Hepburn (1976), and several television series.

Robin Hood doesn’t appear to have featured in any fine art painting until the nineteenth century. However, some of the illustrations made for printed editions of his tales have interesting pedigrees. This coloured engraving of Robin Hood & Clorinda was made in 1783 from an original by John Meheux, by the relatively young William Blake, when he was working primarily as an engraver.

‘Good’ King Richard, to whom Robin Hood was loyal, sits drinking under an oak tree at the right, still wearing his armour from the Crusades, the only link between these legends and the ‘Saracens’ of the Middle East. Various of the ‘Merry Men’ and Maid Marian can be spotted in the crowd: at the left, with a deer over his shoulder is Little John, sat under the same chestnut tree is Friar Tuck, and Robin Hood stands in the centre, in red, with Maid Marian to the right.

George Cattermole was an artist and illustrator who moved in literary circles, and a friend of Charles Dickens. His Interior (Tales from Robin Hood, Featuring Friar Tuck) from about 1850 shows, from the left, Friar Tuck, Robin Hood, and Little John in a strangely inappropriate indoor scene.

Two of the most popular of Charles Dickens’ novels tell rags to riches stories: Oliver Twist and David Copperfield. As with his other books, very few ‘fine art’ paintings have been made of them, despite their international and lasting appeal. The closest I have come to a painting of either novel is Charles Edmund Brock’s watercolour of Oliver Twist, which turns out to be one of many such paintings which he produced as illustrations for Dickens’ books.

From the Renaissance onwards, many great painters have lived their own rags to riches stories. One of the clearest in modern times is that of Carl Larsson, who was born to a feckless, hard-drinking and abusive father, and a mother who worked long hours as a laundress to try to feed her family. They lived in a succession of slums in Stockholm Old Town, and were evicted from at least one of them. Larsson later wrote:
As a rule, each room was home to three families; penury, filth and vice thrived there, leisurely seethed and smouldered, eaten-away and rotten bodies and souls. Such an environment is the natural breeding ground for cholera.

If they didn’t die during an outbreak of cholera or other infectious disease, many escaped by emigrating to America. Larsson’s opportunity to escape came when his talent for art was spotted as he was attending the local Poor School. He was encouraged to apply to the main school of the Royal Swedish Academy of Arts, and succeeded. He proved an excellent student there, winning a medal for his life drawing, and he started to produce graphic work for newspapers.

But he never appears to have painted his childhood.

When Larsson painted his Self-Portrait in his new studio in 1912, he sits back with the ease of a successful artist in his late fifties. Around him are the creature comforts furnished by that success, and designed by his wife. There are some gentle touches of eccentricity, like the sword passing through the huge book open in front of him, and the statue whose feet are propping the book up.

Like so many who made it from rags to riches, the many pains of the past were best left unpainted.

The appeal of the plot in paintings

Throughout the history of painting, professional artists have worked for those who paid them, in their court, as patrons, or purchasers of their paintings. Those with the money to pay those artists don’t appear to have found the Rags to Riches plot appealing. It has been most popular among those who aspire to follow the same course, hence in oral tales such as Cinderella and Robin Hood, and more lately among those who were able to learn to read as education became more widespread among the lower classes.

Thankfully, in the third of Booker’s archetypal plots, the Quest, we are spoilt for choice.