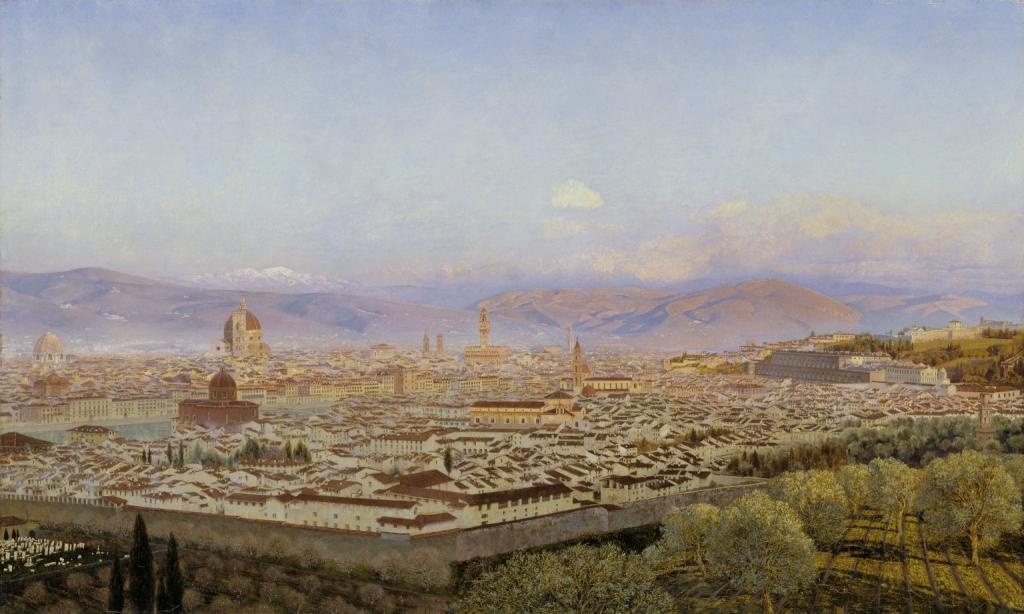 John Brett had first visited Florence in November 1861, a decade after he’d become a professional painter. Since his first major landscape in true Pre-Raphaelite style had been praised by Dante Gabriel Rossetti and the influential critic John Ruskin in 1856, he’d been looking for the right motif to launch his career.

He left England in late 1862, and by January had found the perfect vantage point at Bellosguardo, a hill to the south-west of Florence, and started painting the city spread in front of him. In accordance with Ruskin’s writings, he worked without the aid of significant preparatory studies, painting entirely in front of the motif. Brett had an eye for fine detail which helped him in this task, but is thought to have used a telescope too. He may have had the assistance of a camera lucida, and even some photographs.

Painting a relatively large canvas in such fine detail in front of the motif is both technically demanding and arduous, a task which very few landscape painters have even dared to attempt. During this time, Brett was supported by the poet and playwright Robert Browning, who lived in the city in Casa Guidi. Two years earlier, Browning’s wife, the poet Elizabeth Barrett Browning, had died there after a long illness. The painting was also intended as homage to Robert Browning for his help in its completion.

Brett’s view of Florence from Bellosguardo (1863) encompassed almost the whole of the city which had been the cradle of much of the southern Renaissance, and is breathtaking to many viewers. By any standards, it’s a triumph of painting, both technically and artistically, and he had high hopes of success when he submitted it to the Royal Academy shortly after his return to London that year.

It came as a great shock when it was rejected.

Thankfully for Brett, the painting was purchased in May by the National Gallery, and he was acclaimed in the press as ‘head of the Pre-Raphaelite landscape school’, although by that time he was probably the last of its practitioners. Others had already abandoned Ruskin’s precepts for the impossibility of their demands.

Brett’s debut landscape from the summer of 1856 was no less accomplished. To paint this, he travelled to Switzerland, where he ascended to the glacier above the village of Rosenlaui.

Influenced by the fourth volume of Ruskin’s Modern Painters, and the nearby work of John William Inchbold, who was painting about ten kilometres away at the time, Glacier of Rosenlaui appears to have been painted entirely en plein air, in front of the motif. Despite its great detail, particularly in the foreground, just as prescribed by Ruskin, he signed and dated it 23 August 1856.

In the summer of 1858, Brett had set off again to the Alps, where he painted a second remarkable mountain view, this time at Val d’Aosta in north-west Italy.

Val d’Aosta (1858) was painted from a hill about a kilometre north-east of where Brett was lodging, according to Christopher Newall. In contrast to Glacier of Rosenlaui, Brett augments the geological details in the foreground with a sleeping woman and a brilliant white goat.

Probably started with a series of studies and sketches, Brett seems to have worked on the oil version in front of the motif, then brought it back to England for completion during the late autumn of that year. He considered it finished by Christmas, and it was exhibited at the Royal Academy in 1859. Ruskin’s Academy Notes begin with enthusiastic praise, before starting to find fault:
A notable picture truly; a possession of much within a few feet square. Yet not, in the strong, essential meaning of the word, a noble picture. It has a strange fault, considering the school to which it belongs — it seems to me to be wholly emotionless. I cannot find from it that the painter loved, or feared, anything in all that wonderful piece of the world.
(John Ruskin, Academy Notes, 1859, in Cook ET & Wedderburn A (eds) The Works of John Ruskin, vol 14, pp 234-8.)

After the rejection of his Florence from Bellosguardo, Brett didn’t hang around in England, but was out in Italy again in the summer of 1863 once more working to Ruskin’s rules.

Massa, Bay of Naples (1863-64) is perhaps the most spectacular of the oil paintings which Brett completed during this Mediterranean campaign, and appears to have been painted from a vessel on the water.

He had travelled there on board the SS Scotia, although it’s unclear whether that ship served as his floating studio, or he may have transferred to another. The Scotia arrived in the Bay of Naples by 9 September, following which he went to stay in Sorrento, then Capri by November. It’s therefore likely that he continued to work on this canvas during the winter of 1863-64.

To his delight, Alfred Morrison bought this painting on 6 May 1864, for the substantial sum of £250, and Brett was to benefit further from Morrison’s generous patronage. By August the following year Brett could afford to buy his own yacht, and tried a change of tack: painting the British coast using studies made in front of the motif, but working on his finished paintings in his studio.

In the summer of 1870, Brett sailed around the south-west coast, making detailed notes, sketches, and studies as he went. The British Channel Seen from the Dorsetshire Cliffs (1871) is a large canvas which Brett apparently painted from those, during the later part of that year. Although not geographically-specific in any way, it is usually thought to have been painted from the cliffs above Lulworth Cove in Dorset. When it was exhibited at the Royal Academy, debate was focussed on whether the azure colour used for the sea was appropriate.

A couple of years later, he painted another large maritime canvas of A North-West Gale off the Longships Lighthouse (1873) in which the lighthouse and rocks are the only clues as to its location. Again it was painted in his studio after notes and preparatory sketches, and this time was well-received when exhibited at the Royal Academy in 1873.

Brett continued to paint some pure seascapes, such as the highly successful Britannia’s Realm (1880), although by now these were products of his Putney, London, studio and based on earlier notes and sketches. Exhibited at the Royal Academy in 1880, this was purchased ‘for the nation’ from the Chantry Bequest even before it had been seen by the public. Brett was then able to order a larger yacht, and spent the summer painting the rugged coast of Cornwall in more Pre-Raphaelite style. He was elected an Associate of the Royal Academy the following year.

In some ways, the jury’s rejection of Brett’s Florence from Bellosguardo did him a big favour, in confirming the impossibility of Ruskin’s rules for Pre-Raphaelite landscape painting. He was then able to move on and make himself a comfortable living from far less exacting art. But I still wonder what might have happened had that jury recognised the magnitude of Brett’s achievement. Could it have changed the course of landscape painting in Britain?