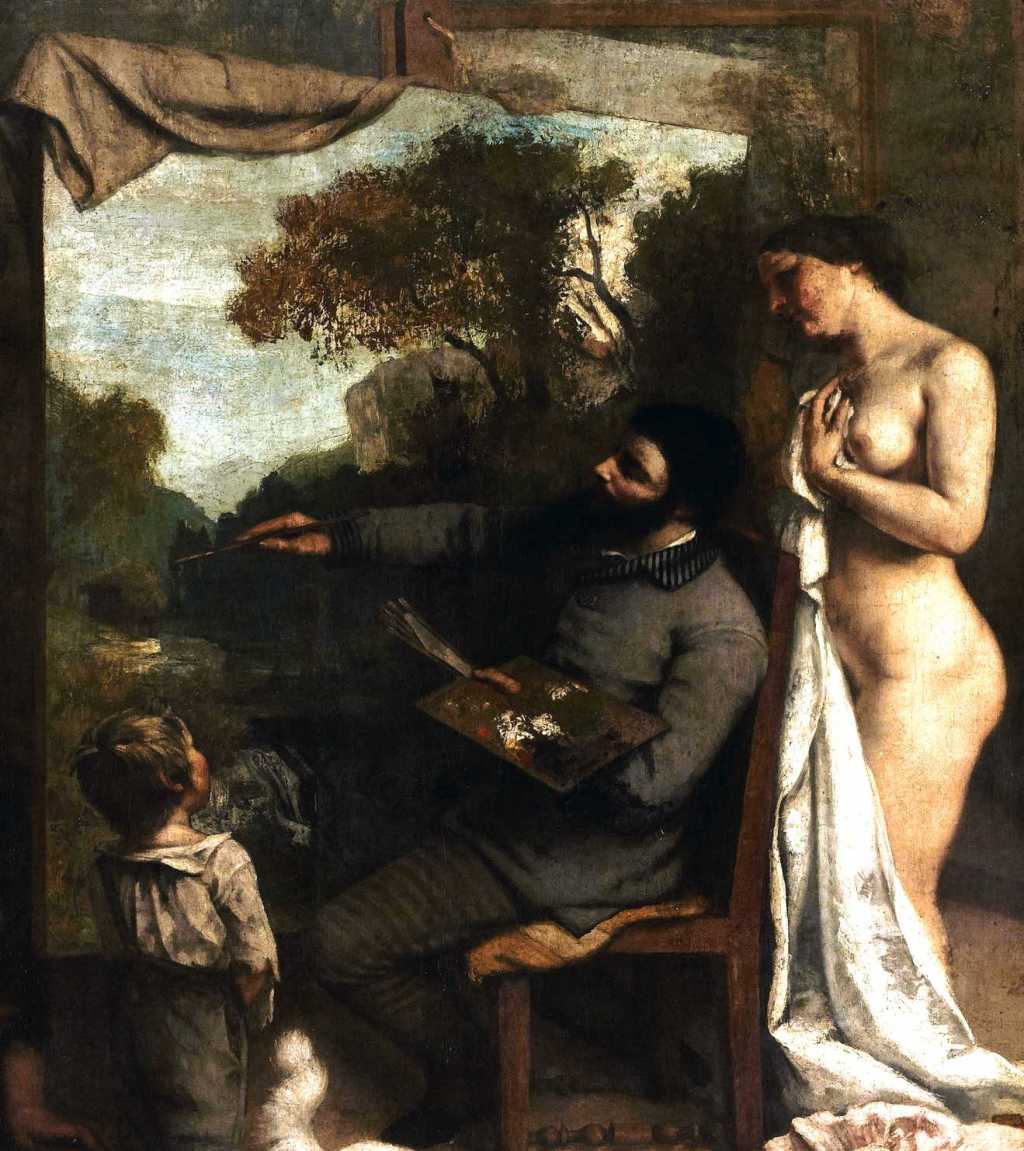 In the middle of the nineteenth century, Gustave Courbet was something of the enfant terrible of French painting. His startling self-portrait The Desperate Man from about 1843 is more of a manifesto than a work of art. As he grimaces wildly at the viewer, we should know just what to expect in the coming years.

Just over five years later, he stormed the Salon with three paintings which still reverberate through art. The most successful of them was tragically destroyed in 1945 during the Allied bombing of the German city of Dresden: The Stone Breakers (1849).

One of the surviving images of this painting is of sufficient quality to give an idea of what it must have looked like. It was exhibited at the Salon in 1850, and marks the dawn of Naturalism. Two men are working beside a rural road near Courbet’s home town of Ornans, breaking rocks into smaller stones used to provide a surface for the road. Both their faces are obscured, giving them anonymity, and their clothing is badly worn, torn, and frequently patched. The man on the right kneels on one knee as he brings a long-handled hammer down to break a rock, while the other carries a large wicker basket of broken rocks. One wears wooden working clogs, the other a pair of worn-out leather shoes.

Before the young Courbet had completed The Stone Breakers, he had already started work on an even greater masterpiece, A Burial at Ornans, one of the canonical paintings of the century.

Shown in the same Salon in 1850 was his monumental A Burial at Ornans (1849-50), which brought Courbet instant fame. This huge painting shows in remarkably unemotional and objective terms the funeral of the artist’s great uncle in the small provincial town of Ornans. The event took place in September 1848, but the painting gives the impression that it is a faithful contemporary record.

Courbet actually painted the work entirely in the studio, using those who were present as models. It shows a moment which could only have existed in the artist’s memory, and like Géricault’s earlier Raft of the Medusa, it doesn’t necessarily represent an image which ever existed in reality. But it has been carefully researched, imagined, composed, and painted to give the impression of accuracy and objectivity.

Such a huge canvas showing what would previously have been considered a minor genre motif demanded revision of what was accepted as history painting. That was reinforced by the third painting of Courbet’s shown in that Salon, another view of the lives of everyday people, this time the inhabitants of a tiny village to the south of Ornans.

Peasants from Flagey Back from the Fair (1850) shows those countryfolk driving oxen and other animals along a country road by the light of the setting sun. These are not the rural poor by any means, but middle class farmers. In the right foreground, a man with a black eye (presumably from a punch-up) holds an umbrella and lets a small pig lead the way. Strapped to his back is a large metal kettle with a spout and other goods.

In these three signal works, Courbet had shown the hard daily lives of the near-destitute (The Stone Breakers), a social and business event for the middle-class (Peasants from Flagey Back from the Fair), and a major rite of passage for those at the top of rural society (A Burial at Ornans). These ordinary lives were part of Courbet’s new and social history painting based on the real.

Three years later, the Salon was buzzing with two more of Courbet’s paintings, for rather different reasons.

The Wrestlers shows a popular sport, with two well-muscled men grappling with one another to the entertainment of distant crowds. Unusually for his figurative paintings of the time, Courbet makes it clear that the wrestlers were painted in the studio and appear almost pasted into the setting, without integration of their shadows, for example, and his perspective looks slightly askew. This was the pendant to his more scandalous Bathers below.

Painted and shown at the Salon in that same year, The Bathers may pale by comparison with slightly later works by Manet and the Impressionists, but its realism was seen as provocative at the time. These two women are no classical beauties, and one of them even has dirt on her foot, as they bathe and picnic in a wood.

Despite its stormy reception at the Salon – comparable to reactions to Manet’s Le déjeuner sur l’herbe in 1863 – Courbet’s painting finally brought the artist financial independence when it was purchased by his new patron Alfred Bruyas for three thousand francs.

A couple of years later, Paris hosted an Exposition Universelle, or World Fair, at which Courbet should have been the centrepiece of the French Art Pavilion. He submitted a total of fourteen works – he was never known for his modesty – including A Burial at Ornans and two new works, The Meeting (1854) and The Painter’s Studio, which he’d only just completed.

The art collector Alfred Bruyas is centre stage in Courbet’s tribute The Meeting, which was accepted for the Exposition, where it became derogatively re-titled Bonjour, Monsieur Courbet. Its composition is based on the traditional theme of the wandering Jew, but it looks stilted and contrived.

Perhaps in a moment of revenge, the jury rejected three of his paintings: A Burial at Ornans, The Painter’s Studio, and another. The grounds given were their size, but I can’t help thinking that they could so easily have been accommodated had there been a will to show them.

Courbet’s The Painter’s Studio is one of the great ‘problem paintings’ which has been extensively analysed and ‘explained’ as allegory. Those classical approaches have recently been challenged by Herbert, who argues that trying to determine whether it is allegorical or realist is asking the wrong question.

The figures in the painting show individuals who had influence over Courbet’s life and artistic career. At the right are the artist’s friends and admirers, including his first patron Alfred Bruyas, critics Champfleury and Baudelaire who had been so positive in their reactions to his work, and others. At the left a man with dogs has been interpreted as an allegory of the Emperor Napoleon III. Behind him are figures who were long assumed to be allegorical, but Hélène Toussaint has identified them as contemporary people, most of whom had been supporters of the Emperor’s regime. There seems plenty to have offended a jury who may already have wanted to belittle the artist.

However, at the painting’s centre point is a canvas, at which Courbet himself is shown at work. The nude model beside him might appear contradictory, given that the work in progress is clearly a landscape. This has been interpreted as indicating how Courbet has shunned the academic art tradition for the new (and increasingly popular) genre of the landscape.

Sure enough, Courbet had recently met up with landscape specialist Charles-François Daubigny to paint together in south-eastern France. Daubigny then turned their joint plein air oil sketch into a finished landscape, which was awarded a medal at the same Exposition Universelle that had snubbed Courbet.

Courbet wasn’t prepared to let the jury decide which of his paintings would be exhibited in the French Pavilion. He withdrew all his works and set up his own gallery of paintings next door to the Exposition.

For the moment, Courbet had got away with calling the jury’s bluff. Before long, though, everything caught up with him. In 1870, just before the Franco-Prussian War, he refused the Emperor Napoleon III’s nomination to the Legion of Honour. The following year he became involved in the Paris Commune, and that proved the death of him.

Courbet was accused (not entirely incorrectly) of ordering the demolition of the Vendôme Column in Paris, for which he was initally sentenced to six months in prison and fined 500 Francs. But that punishment was deemed insufficient: the new Republican President decided that Courbet would foot the bill for rebuilding the column, a sum which would have bankrupted the artist.

Gustave Courbet, at the time one of the most important artists in the whole of Europe, was forced into exile in Switzerland, where he took to drink. He was still hounded even there, and the French government informed him that he would repay the cost of rebuilding in annual installments of 10,000 Francs for the next thirty years. Courbet died on 31 December 1877, the day before the first of those payments was due. He was only fifty-eight.

Courbet’s critics and detractors had finally got their victim. But today, they’re forgotten, and Courbet’s paintings are some of the most important and popular in the Musée d’Orsay.